Aave price dropped in tandem with other cryptocurrencies last week, whereby several support areas were shattered, including $255 and $195. The down leg stretched to $170 before AAVE started to regain some of the lost ground.

Over the last few days, the bulls have mainly been in control, pulling the Aave price above $200. At the time of writing, AAVE trades at $236 amid the uptrend aiming for $363.

The four-hour chart reveals a falling wedge pattern, with a 60% breakout target. This is a bullish chart pattern that starts with a wide top and narrows as the price drops. A cone-shaped pattern appears as the price forms lower highs and lower lows. Unlike symmetrical triangles with no bullish or bearish bias, falling wedges slope downward and lead to bullish breakouts.

Note that the bullish confirmation of the uptrend lags until the resistance line is broken, as illustrated on Aave’s chart. It is worth keeping in mind that without an increase in volume, the breakout may stall. A retest of the newfound support often leads to the continuation of the breakout toward the target. 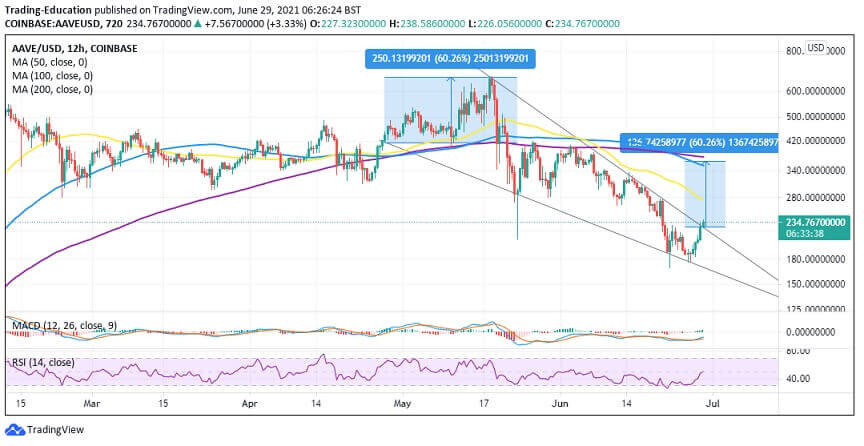 As for AAVE, the wedge pattern breakout seems to have already been confirmed. The next hurdle to come out of the way to accomplish the breakout target to $363. Meanwhile, the Moving Average Convergence Divergence (MACD) has affirmed the bullish breakout as it closes in the gap to the midline. The MACD line also crossed above the signal line, validating the ongoing uptrend.

The Relative Strength Index (RSI) shows that buyers have the upper hand. As the trend strength indicator jumps above the midline, the bullish grip tightens. A continued movement toward the overbought region will cement a bullish outlook.

Aave
Top Brokers in
All Regulated Brokers
67% of retail clients lose money when trading CFDs with this provider.