Aave Price Forecast: AAVE at the Springboard Ready to Launch to $630

Aave finally overcame the resistance at $470, opening the door for gains that extended above $500. However, the uptrend hit a snag at $535, leading to another correction that tested support at $440. Meanwhile, a recovery ensued, pulling the decentralized finance (Defi) token toward $500. The uptrend can continue, especially with a critical technical pattern.

The four-hour chart displays a triple-bottom pattern. This is a highly bullish pattern in technical analysis. It is formed by three relatively equal lows followed by a break past the horizontal resistance, marking the extension of the uptrend.

The triple-bottom pattern is characterized by three failed attempts to break a common support area. Each shot is usually followed by declining volume, but the sequence changes when the price makes the final crack at the resistance. This pattern highlights an ongoing tug of war between the bulls and bears, whereby buyers emerge winners. 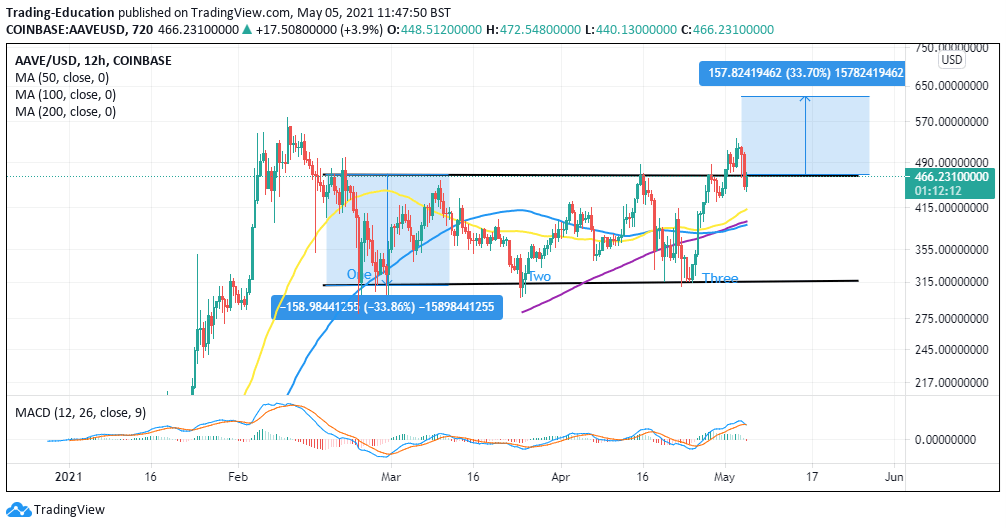 In the meantime, the former support at $470 must be reclaimed to validate the upswing targeting $535. Besides, the Relative Strength Index (RSI) suggests that bulls are gradually regaining control.

The IOMAP chart by IntoTheBlock clearly shows the lack of a robust hurdle capable of sabotaging the uptrend. The bulls should focus on the subtle resistance between $467 and $479, where around 2,500 purchased roughly 520,400 AAVE.

On the downside, Aave sits on top of a robust support area running from $410 to $424. Here, around 1,900 addresses previously bundled up 2.3 million AAVE. It is improbable that the bears will crack this zone to push for lower levels.

IntoTheBlock (ITB) also shows a declining network growth. The “Daily Active Addresses” metric highlights a significant drop in the number of addresses joining the network every day from a 30-day high of 1,500 to the current 806.

As the network growth drops, adoption loses traction. Moreover, it interferes with the inflow and outflow of tokens. The relationship between this metric and price shows that declining network growth is a bearish signal.