Aave has been persistent in the recovery after breaking down to $300 last week. The decentralized token bullish momentum was robust enough, as buyers broke several barriers, including $340, $380, and $440.

At the time of writing, AAVE is up 11.5% in 24 hours to trade slightly above $450.The token has attracted a trading volume of little more than $1 billion in the same period. Aave has a circulating supply of around 12.7 million while its total supply has been set at 16 million. According to the prevailing technical picture, the path with the slightest resistance is upward.

Aave bulls appear to be seeking support at $450 before extending the bullish leg to the record high at $490. Striking above this level would open the door for gains past $500, allowing AAVE to hit a new milestone.

The technical levels on the four-hour chart reinforce the bullish outlook starting with the Moving Average Convergence Divergence (MACD) indicator. As the MACD line expands the gap above the signal line, the bullish grip becomes stronger. Moreover, the Relative Strength Index (RSI) adds credence to the narrative on brushing shoulders with the overbought area. 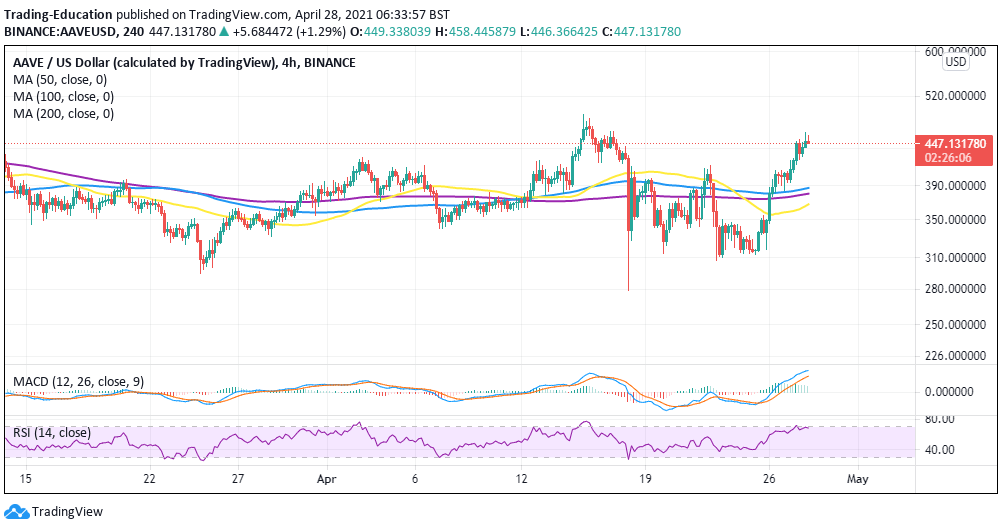 Santiment shows that speculation has soared within the Aave community. The active addresses on-chain model based on a 24-hour trailing average highlights a consistent increase in user participation on the network. For instance, the number of active addresses rose to 2,830 from the dip to roughly 1,550 on April 20. As the addresses soar, speculation tends to increase while the price soars to higher levels; thus, this is a bullish signal.

The network growth metric also reflects the increase in the number of active addresses. According to the model, newly-created addresses have increased from roughly 900, posted on April 24, to approximately 1,370 at writing. An improving network growth shines a light on a network that is gaining traction in both adoption and as well as token value.

It is worth noting that the all-time high at $490 may delay the upswing due to the possibility of a double-top pattern forming. At the same time, holding onto support at $440 is key to the uptrend. Therefore, if lost, overhead pressure will likely rise and sabotage the upswing to $500. Other support levels include #390 and $350, respectively.