Aave, a decentralized finance (Defi) token, has experienced immense growth since the beginning of May to the extent of giving a blind eye to the bearish wave in the market during the previous weekend session.

The prevailing technical outlook points at the bullish narrative lasting longer. Besides, the technical pattern on the daily chart has a breakout target at $1,000.

Following an elongated consolidation, the Defi token formed a descending triangle pattern on the daily chart. This pattern mostly has a bearish impulse and is often referred to as a reversal signal.

However, there are instances when the descending triangle results in an uptrend, especially when the fundamentals of the coin are more robust and the market is generally in an uptrend. Hence, Aave lifted off the upper trend line and began setting the pace for gains eyeing $1,000.

Triangle breakouts are known to have precise targets measured from the highest to the lowest points, as observed on the chart. At the time of writing, AAVE is teetering at $651 as bulls gradually build the uptrend. 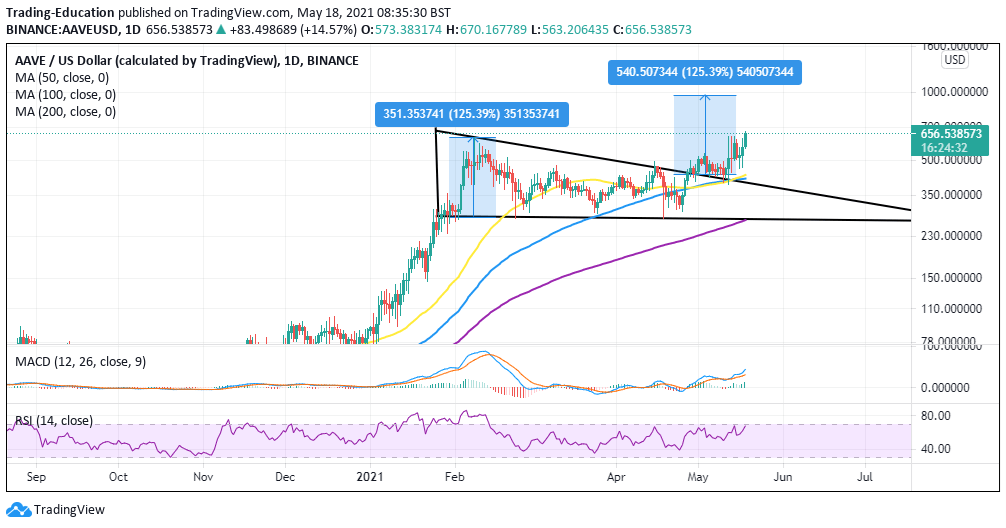 The bullish narrative has been validated by both the Moving Average Convergence Divergence (MACD) and the Relative Strength Index (RSI) on the same daily chart. The former currently moves higher above the mean line while the MACD line (blue) widens the divergence above the signal line. This massive bullish signal may validate the upswing in the coming sessions.

Similarly, the RSI is about to cross into the overbought region. Stepping into this zone may trigger more buy orders as speculation rises. However, after entering the overbought area, traders should proceed with caution to avoid being caught unawares by a correction.

It is vital to note that Aave has tested the resistance at $700 but is yet to breakthrough. The seller congestion may limit the price action in the near term. If overhead pressure rises, AAVE could start to reverse the trend, seeking support perhaps at $600 and $500, respectively.