Andy Krieger undoubtedly is one of the most famous currency traders.

What does it take to be regarded as a currency trading genius Like Andy Krieger?

Well, to be honest, a lot of different things.

There are some traders out there that go the extra mile. Traders that possess such skill that they accomplish unbelievable feats that will never be forgotten.

If you know a bit about trading already, then you may have come across the phrase corporate raid or even hostile takeover.

These are known to happen in the world of business where someone or a company aggressively attempts to use their financial resources to gain control of another company.

What Andrew J. Krieger, or Andy, achieved wasn’t either of these.

Krieger is a pioneer who, like many professionals in the world of trading, knew when to take advantage of artificially high pricing. So much so that his actions resulted in the market correcting itself.

Andy Krieger's name will forever be associated with the chaos that ensued on Black Monday.

On that fateful day in 1987, stock markets around the world crashed, hitting all of the world's major economies.

Krieger's actions on that day have gone down in trading history and made him one of the most influential financial figures of the last century.

Want to learn to trade like Andy Krieger? Sign up to our forex trading course, The Ultimate Guide To Forex Trading, it’s completely free!

But how did Currency trading genius Andy Krieger make his name? 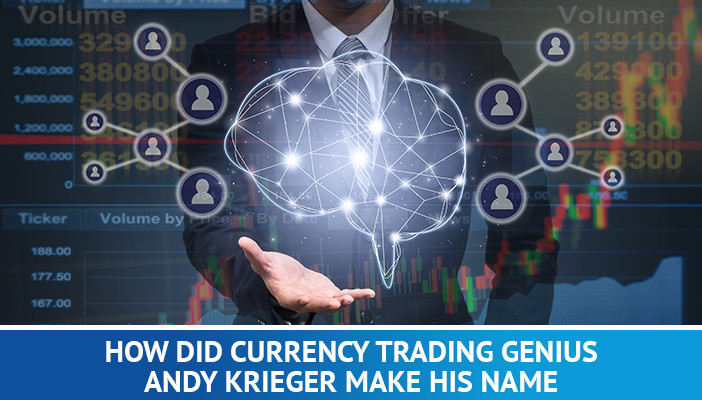 Krieger graduated from the Wharton School of Business and majored in Sanskrit and Philosophy (an interesting choice for someone who became a renowned trader!).

His trading career truly began when he joined Bankers Trust in 1986 after previously working for the Saloman Brothers.

He quickly gained a reputation amongst those familiar with big market trading as one of the most aggressive traders working at the time.

His ruthless trading strategy awarded him big results on his risky investments and the Bankers Trust were at awe with him.

With the full support of the Bankers Trust board behind him, his trading limit was vastly increased from $50m (the normal limit for most traders at the time) to $700m. That’s more than the GDP of some small nations.

What was Black Monday?

On that day, available stocks suddenly far exceeded the demand for stock and investors. This led prices to fall and cause a panic.

How did it happen?

The exact causes of Black Monday are debatable and controversial.

Many believe it was a mixture of events. 30 years on, there is still no consensus on what actually caused the event to happen.

Some attribute it to the rise of computerised orders (also known as programme trading).

A new concept at the time, computerised orders sped up the selling process to a point that brokers and the New York Stock Exchange (NYSE) could not keep up.

During Black Monday, sell orders overwhelmed the automated system used by the NYSE and traders, lost in the chaos, gave up trying to put through trades.

This only worsened the situation as no one had accurate information on what was actually happening.

Others believe market psychology was the main culprit, saying that the dramatic dip in price started a relentless selling frenzy. But this doesn’t necessarily explain how it actually started.

Another factor was portfolio insurance. Designed to protect brokers from loses, it is believed that it actually ended up increasing their risky behaviour.

On top of that, there is a suspicion among some that insider trading may have played a role too. After the crash, the market shot back up dramatically.

The US economy before the crash

Before the 1987 crash, the US economy had begun to slow down following a period of recovery after the recession of the 1980s in Europe and the US.

The Friday before Black Monday was a red flag that something big was about to happen. The DJIA (Dow Jones Industrial Average) lost approximately 100 points by the time it closed at 4 pm in New York.

While it was an incredibly busy day for many, traders didn’t instantly see what might be coming.

On Monday 19th, the crash began in Hong Kong and spread to Europe and then to the US.

How did it affect traders?

The stock market was dropping so fast traders had no idea how low it could possibly go, they couldn’t see the bottom of this downward slide.

They were so busy they weren’t even sure if they could fulfil all of their orders, some even stopped trading completely.

You also have to remember that at the time, completing an order was a lot more complicated, time-consuming and involved more people, which certainly didn’t help the process.

By the end of Black Monday, the New York stock exchange had dropped 508.32 points. By today’s standards, this may not seem like much, but at the time it was ungodly.

Some traders lost everything and left the market broken and in tears.

On average, stocks dropped 40% across the world and created the largest one-day percentage decline of the DJIA in history, losing 22% in value, roughly equal to $500 billion.

Economists believed that the aftermath of this economic explosion would be almost identical to the years following the market crash of 1929, which resulted in The Great Depression.

Thankfully, that wasn’t the case and the market went on to correct itself.

How did Andy Krieger profit from Black Monday? 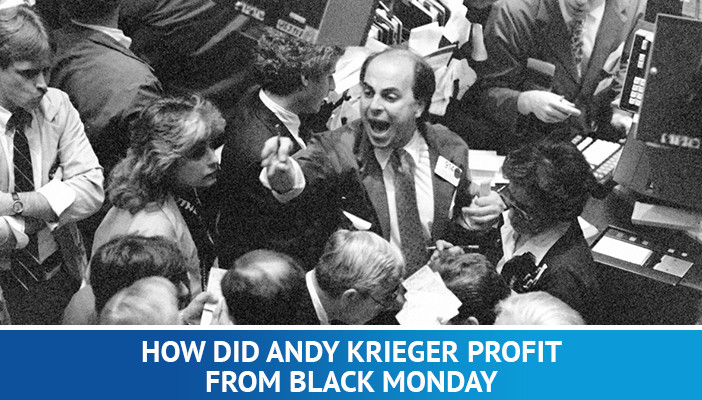 Krieger, as did other clever traders, saw a huge opportunity when all other traders saw oblivion.

As traders and investors saw the US dollar plummeting, they looked for a safe place to store their funds until the crisis was over.

They rushed to invest their money in foreign currencies that they believed were surviving the sudden drop in value better.

Foreign exchange markets would suddenly become the hot commodity if they could survive against the US currency.

Krieger realised that other, smaller currencies would suddenly become immensely overvalued because of this.

There was no way that these small countries with much smaller economies than the US could sustain such outrageous prices.

He believed that the New Zealand dollar (the Kiwi) was particularly overvalued and vulnerable to collapse.

So he used his vast purchasing power within the Bankers Trust to bring a huge amount of money to bear on the currency.

Many have suggested that he was dealing with more New Zealand dollars than the country actually had in circulation at the time.

With a leverage of 1:400 and adopting the new techniques of options, this was a venture never before seen in the trading world.

Sure enough, the Kiwi went down 5% after a few hours against the US dollar, and some claimed had fluctuations of up 10% during the day.

Krieger completed his trade with an estimated $220 million to $300 million made for Bankers Trust. Some have even suggested that the deal may have been as large as $700 million or even $1 billion.

Other traders soon followed Krieger’s trade, also realising how overvalued the Kiwi was, which only worsened the situation for New Zealand’s economy.

This incident caused major controversy in the New Zealand Central Bank, whichlater contacted Bankers Trust and demanded that Krieger be removed from trading their currency.

Krieger arrogantly argued that New Zealand was too small a country to cope with the amount of trade Bankers Trust was able to perform with their currency.

This prompted another wave of dissatisfaction from the nation he'd invested in.

If that wasn’t bad enough, New Zealand went on to become one of the worst-hit countries during the crash. Their stocks fell up to 60% at their worst and their economy took many years to recover in comparison to the US and Europe.

Interesting fact: New Zealanders refer to Black Monday as Black Tuesday, due to the time difference.

In the end, very little of the profit was given to Krieger after this gargantuan sale - around 1% of the money (likely, $3 million) was bestowed onto the man who had made the deal a reality.

Krieger resigned from his position at Bankers Trust shortly after this feat, reportedly disgusted by the small percentage he earned from this huge deal. Most likely looking for a new challenge and an environment to learn.

People also read: The Trading 'Bible' That Will Change The Way You See The Market

Where is Andy Krieger now?

While Krieger never made a trade that large again, it will remain in traders minds forever. Krieger vs. the Kiwi is often sighted as one of the biggest deals ever made.

When Krieger left Bankers Trust, the company struggled with the forex market.

It is highly likely that they were unable to understand Krieger’s complex trading strategies and it is known that they had to restate their currency trading profits.

Some may argue that the greed of the company cost them one of the world’s best traders. In little over 10 years, Bankers Trust would be absorbed by Deutsche Bank.

After Bankers Trust, in 1988, Krieger went on to work for George Soros’s Soros Fund Management.

Soros, perhaps the world’s most famous investor and trader, would in five years became known as The Man Who Broke The Bank of England after performing a similar feat to Krieger during the Black Wednesday Crisis of 1992.

The two deals are often compared to one another.

Like Krieger, Soros recognised that the pound sterling was overvalued.

The UK had entered the ERM (European Exchange Rate Mechanism) under unfavourable terms, was facing extremely high inflation rates and interest rates were hurting their assets.

Soros built a huge short position against the pound and is believed to have made £1 billion from the deal. It is very possible that Krieger’s 1987 deal may have influenced Soros’s 1992 deal.

After working a short time with Soros, Krieger went on to found Northbridge Capital Management Inc. and Krieger & Associates Ltd.

In 1992, Krieger published a book titled The Money Bazaar: Inside the Trillion-Dollar World of Currency Trading, along with co-author Edward Claflin.

The book attempts to explain how global business moguls try to manipulate and control the value of the world’s currencies. A fitting topic considering his success as a trader.

Krieger is also known philanthropist, donating $350,000 to victims of the 2004 tsunami that devastated Indonesia.

With his wife Suri, Krieger founded the Karma Foundation, which aims to fund educational projects and help those impaired. Krieger donated 10% of his annual profits to the foundation.

What can we learn from Andy Krieger? 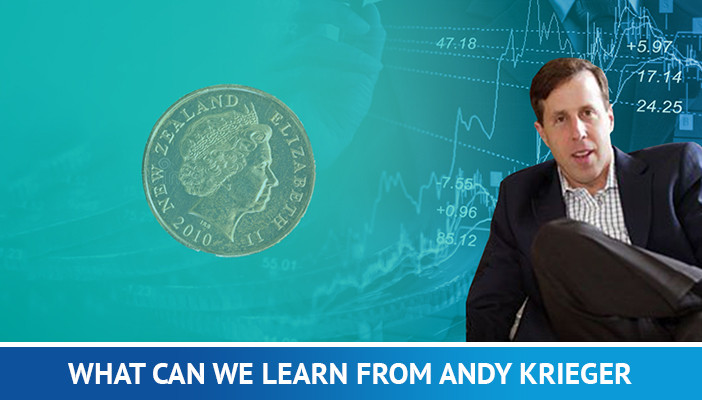 At Trading Education, we believe Krieger had techniques that most investors can only dream of.

The importance of fundamental analysis.

Krieger had access to the right information about multiple international currencies that influenced his decision.

He knew how to analyse what was in front of him

Successful traders are always looking for new ways to make risky ventures with big pay-offs, and he continues to be hugely influential to traders old and new today 30 plus years on.

Some economists believe that today’s economy looks similar to how it did back in 1987, and so it is very possible that something like Black Monday could happen again.

Who knows, another Andy Krieger could be in the making with the right mentality, the right opportunity and the right amount of trading knowledge.

Every legendary trader was once a beginner! No one ever starts out perfect at anything.

If you enjoyed reading Andy Krieger: The Currency Trading Genius from Trading Education, please give it a like and share it with anyone else you think it may be of interest too.