Are Dogecoin (DOGE) Coins Too Cheap To Ignore?

Is Dogecoin Meme Cryptocurrency Worth Adding to your Watchlist in 2022?

Meme cryptocurrencies saw a meteoric rise, with Dogecoin being the pioneer of this trend in the market. The meme-inspired cryptocurrency experienced incredible highs and popularity. Originally created as a joke, Dogecoin became a crypto tale and has since then been marked as the top penny cryptocurrency.

Dogecoin has created several millionaires and billionaires. Numerous celebrities have voiced their support for the crypto, the strongest voice among them being Tesla CEO Elon Musk. He was partially responsible for the massive growth of DOGE after calling it his favourite cryptocurrency. Also, by mid-2021, Dogecoin was consistently polling among the top five cryptos by total market cap.

But before deciding if DOGE is a good buy right now, let's see whether Dogecoin investment fits your portfolio and risk appetite.

Dogecoin is worth watching, not merely because of the hype and popularity, but its significant use cases.

Like any other cryptocurrency, Dogecoin runs on its dedicated blockchain. It uses unique cryptography to keep all transactions secure, called the Scrypt algorithm. Also, the digital ledger is constantly being updated with all new transactions. Like Bitcoin, the Dogecoin blockchain uses a Proof-of-Work consensus mechanism.

But there is no lifetime cap on the number of Dogecoin that could be created by mining, making the crypto highly inflationary. The blockchain rewards miners for their work by creating millions of new Dogecoin every single day.

Thanks to its unique Scrypt algorithm, Dogecoin has near-zero transaction fees, making DOGE a highly suitable mode of payment. It is also often used as a tipping coin for content creators across social media platforms like Reddit, Twitter, Facebook, etc. Additionally, the coin permits user-specific access to data on the blockchain by employing both public and private keys. Several companies and merchants have started accepting it as a mode of payment. For instance, Tesla has announced that it will accept DOGE as payment for merchandise and the company's supercharging station.

New updates to the blockchain network and website revamp would push the price and demand of DOGE.

Dogecoin’s rally to the list of the top penny cryptocurrencies was partially fueled by celebrity endorsement and social media hype. Dogecoin gained cult status on Reddit’s WallStreetBets message board, where enthusiasts promised to propel its value “to the moon”. From “Who let the Doge out” to a faux Vogue-Dogue magazine cover, Dogecoin rose to the prominence of its popularity worldwide. The community around this crypto has also extensively used the coin for several philanthropic purposes.

The most high-profile fan and supporter of DOGE is the billionaire Elon Musk himself. Following Musk, others like Snoop Dogg, Mark Cuban, and Gene Simmons have all jumped on the Doge bandwagon.

Since the digital asset has grown into prominence this year, it has become imperative for the crypto to have a roadmap. It has successfully gone from being a joke project to becoming one of the biggest cryptocurrencies by market cap by releasing its roadmap and outline of plans for 2022. Crypto enthusiasts believe that this is a crucial reason to buy DOGE now and not ignore it completely. The roadmap outlines some significant projects that the digital asset will be involved in. These projects will significantly push the price of DOGE towards accelerated adoption.

The roadmap includes eight new projects. One of them is LibDogecoin, a network that enables developers to work with the project without hassle. Another project, GigaWallet allows DOGE payments to be enabled on platforms seamlessly. And finally, Dogepedia is a separate section of the website, which will be a collection of frequently asked questions specifically pulled from various social media platforms to provide answers and awareness to the most serious concerns of the community.

One of the key risks of investing in Dogecoin is its inflationary nature. Since there is no lifetime limit on the number of Dogecoin that can exist, the constant flow of new coins into the market would put continuous downward pressure on the coin’s value. Therefore, there is minimal incentive to hold the cryptocurrency for the long term.

Today, the trading value of DOGE solely relies on the market trend, as it does not have any real-world project to back it up. The team behind Dogecoin has to work consistently to enhance its network and add more utility features to propel Dogecoin from its meme coin status to a potential investment option. The release of the roadmap and new projects could be a stepping stone towards this goal.

Unlike several other digital currencies in the market, Dogecoin’s value today is not tied to real-world capital. Instead, Dogecoin is more of a cultural token whose value relies on the strength of its community and the interest of potential customers. Experts and analysts would not recommend allocating funds to Dogecoin for the long term. An investment in Dogecoin is more about being a part of something bigger than making money for several investors.

But, with the release of the roadmap, and the team’s plans to enhance the network’s utilities, Dogecoin is not too cheap to ignore but is always worth keeping an eye on for short-term profits. However, the amount of Dogecoin investment would entirely depend on an individual's risk appetite and investment portfolio.

Open an account with eToro, deposit some funds with USD, and finally – buy Dogecoin from just $10. 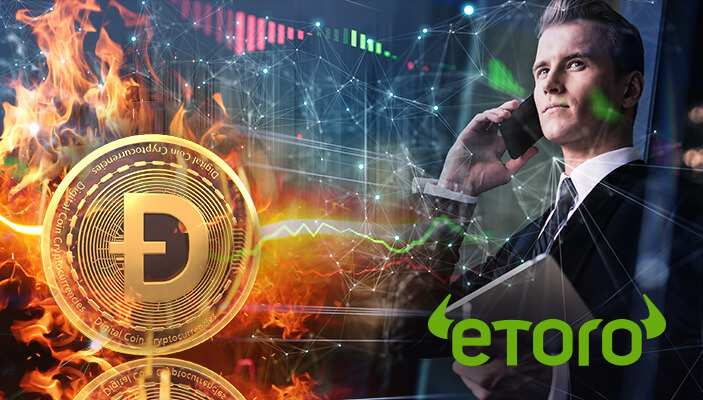 What Might Happen If You Invest $100 In Dogecoin (DOGE) Today?

Best Methods On How to Earn Dogecoin Fast