Should you be watching platform blockchains as Web 3.0 becomes a reality?

4 Trending Cryptocurrencies To Watch In 2022

Of the many cryptocurrencies available in the market today, platform blockchains have emerged as some of the most important. Quite expected because they are an anchor to the entire market. For instance, the fast-growing DeFi and NFT markets are thriving because there are platforms for them to launch.

With the web entering its next stage of evolution (Web 3.0), one that Dapps will dominate, the value of platform blockchains cannot be discounted. Signs of the potential these blockchains hold is evident in their price action all through 2021.

For instance, Solana (SOL), one of the hottest entrants in this space, has recorded tremendous growth this year. Year-to-date, Solana is up by 8914%. In the most recent correction, it has also held its value pretty well, trading steadily above $200.

Similarly, Avalanche (AVAX) is making huge moves and recently made its debut as a top 10 cryptocurrency. Avalanche is drawing lots of user attention thanks to its limitless scalability, low transaction speeds, and eco-friendliness.

On this basis, do you think platform blockchains could beat the market going into 2022? If you believe they will, here are the top four crypto assets to watch today.

What’s more, Ethereum continues to draw the interest of some of the largest corporations looking to leverage the power of blockchain technology. The nature of companies using Ethereum is evident in the Enterprise Ethereum Alliance.

Besides its market dominance, Ethereum is in the process of a shift to Ethereum 2.0. The shift is aimed at making Ethereum more scalable and more environmentally friendly. All through 2021, a lot of progress has been made, one of the more significant ones being the London Fork of August 5th. The London fork was aimed at addressing the gas fees problems that have plagued the Ethereum blockchain for many years. The full upgrade to Ethereum 2.0 is expected to be completed in 2022, and if recent events are anything to go by, the shift could happen sooner than expected.

In October, the Ethereum Foundation published an article that seems to indicate that most of the work on the shift to Eth2.0 is pretty much done. In a workshop of different Ethereum clients, the participants worked to mimic the complete transition of Ethereum to Ethereum 2.0 in a testnet environment.

The teams showed that everything worked perfectly on the testnet. The Ethereum Foundation blog collaborated on this by writing that, Ethereum’s 5th milestone of 10k validators spread over 100 nodes was complete on the last day of the workshop. It was also announced that a number of client implementations hit terminal total difficulty, moved to Proof-of-Stake, and completed the chain.

This is a big deal because Ethereum will essentially eliminate a key selling point for most of its competitors once the transition is complete. This could see Ethereum increase its share of the platform blockchain market by a huge margin.

Looking ahead, the successful transition to Eth2.0 spells good tidings for Ethereum’s price. That’s because Ethereum is now a deflationary cryptocurrency. This means the more people use the chain; the more Ether is burned. When looking at this from the perspective of Ethereum’s potential to whitewash the competition, the price could rally significantly going into the future.

With all these upcoming developments, Ethereum is in a perfect buy zone. It has been in a correction over the past week but seems to have found strong support at the $4000 mark. Could this be a perfect time to put ETH into a crypto portfolio? 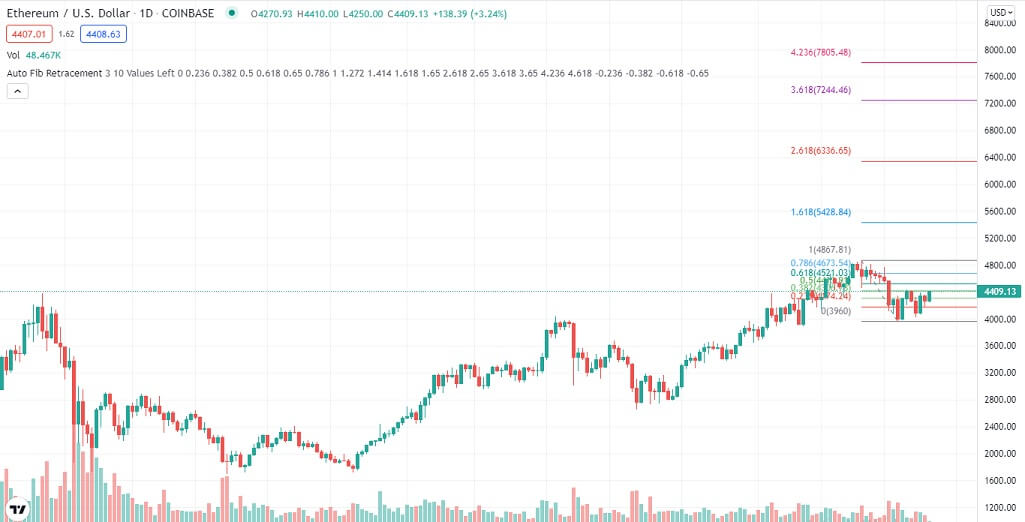 Second, in the list is Near Protocol. Near Protocol is one of the new generation blockchains that have entered the platform blockchain market. Like most new entrants, Near Protocol uses scalability and transaction speeds as a selling point.

However, unlike most “Ethereum killers,” Near Protocol is highly decentralized and takes cognizance of Ethereum’s dominance in the market. It is for this reason that Near Protocol Dapps can run on Ethereum, Cosmos, and Polkadot. This is in appreciation of the fact that multiple chains will dominate the future.

One of the aspects that make Near Protocol a top potential cryptocurrency is its approach towards scaling. Near Protocol is using an approach called Nightshade Sharding. This entails splitting a chain into multiple chains, where every chain split can be split into multiple other chains (re-Sharding). Essentially this makes Near Protocol infinitely scalable.

What’s more, all this can be done without compromising on security. That’s because all the Near Protocol network validators validate every new Sharded layer. In essence, Near Protocol is a platform blockchain that is perfect for the upcoming Web 3.0 revolution.

Even better, Near Protocol is drawing in new projects that are building the next generation of Web 3.0 applications. Yesterday, Near Protocol announced via Twitter that QSTN, a Web 3.0 data platform would be launching on top of the platform. This is a big deal because it shows developers notice the potential that Near Protocol holds in the market.

Looking ahead, Near Protocol holds a lot of growth potential. Web 3.0 is only getting started and is without a doubt the future of the web. It deals with the problems of privacy and censorship that have become an issue with many Web 2.0 applications. Thanks to its ability to scale securely, and at low transaction costs, Near Protocol has the potential to dominate the Web 3.0 Dapps space.

Already, its price action since launch points to a cryptocurrency that has a lot of growth potential. When it launched back in 2020, Near Protocol was trading at $1.2. Today is trading at $9.14. That’s an increase of 661%, quite a feat for a new project that was still under development at launch. As Web 3.0 Dapps start building on top of it, NEAR could give investors an even higher ROI. Is NEAR the future of Web 3.0 platform blockchains? 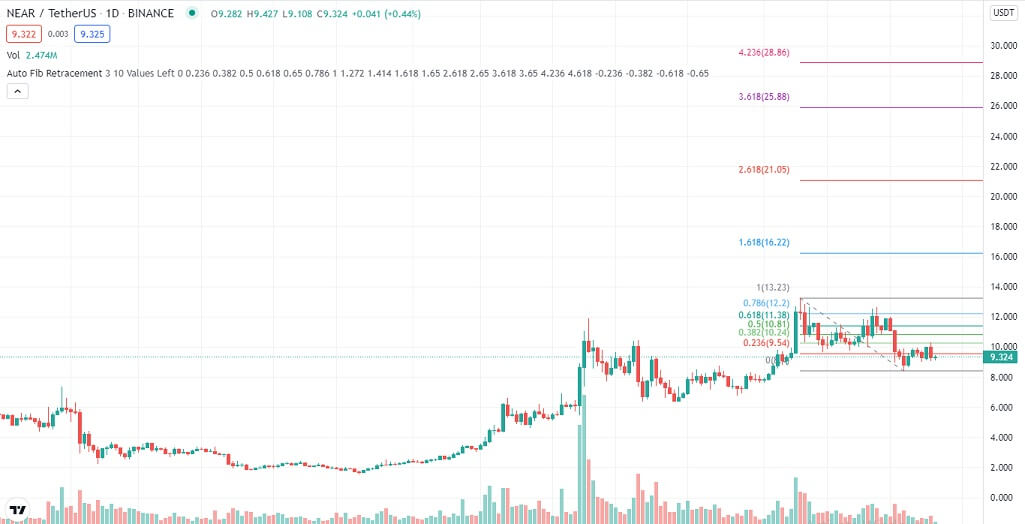 Polkadot stands out in the market for several reasons, the biggest being its approach to scalability. Polkadot makes use of parallel chains that give it infinite scalability even as the network grows.

This is achieved in a secure environment because every new parallel chain is secured by common validators that secure the entire network. On top of that, everyone who holds Polkadot tokens has a say in how the network is governed. This ensures that Polkadot will never have a set of privileged actors.

What’s more, Polkadot is designed for ease of use. You do not need to be a top-tier developer to use Polkadot. Thanks to its substrate framework, pretty much anyone with computer skills can create a Polkadot blockchain in a matter of minutes.

The best part is that Polkadot’s growing adoption and strong core fundamentals have seen the value of Polkadot grow significantly over time. Year-to-date, Polkadot is up by 599%.

With all the developments happening on the Polkadot blockchain, and the growing interest in Web 3.0 applications, Polkadot is uniquely positioned for growth going forward. Is this the best time to buy DOT? 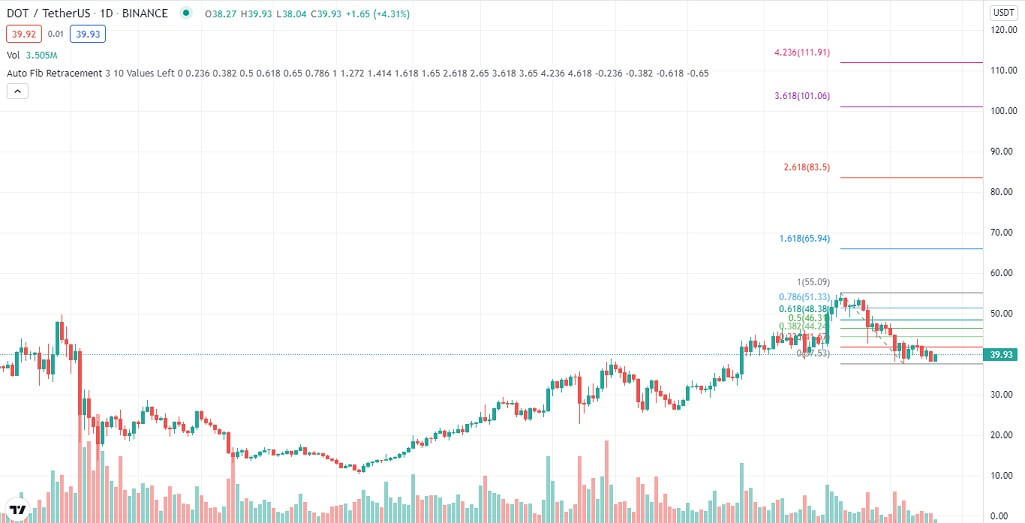 To complete the list is Cosmos, a cryptocurrency that is at the center of the fast-growing Web 3.0 space. Cosmos is built for the interoperability of Dapps. Through the Cosmos marketplace, it will be possible to swap digital assets from multiple chains at low fees and instantly.

Considering that Web 3.0 will be dotted with assets from multiple chains, blockchains that can act as a conduit for the same will become very important going into the future. So far, Cosmos has gained traction as one of the best on this front, because of its open decentralized nature.

What’s more, Cosmos has features that allow for asset security inter-chain. With its upcoming security feature, Cosmos will be able to secure multiple chains using the ATOM token. This has two advantages: security and the ability for investors to earn a passive income by staking ATOM.

Cosmos market potential has reflected quite well on its price so far. Year-to-date, Cosmos is up by 385.7%. Thanks to its strong core features and the ongoing shift to Web 3.0, Cosmos is getting a lot of positive ratings from analysts. Some major market analysts give Cosmos a potential 100% value growth by the end of 2022.

With its huge growth potential, would you consider adding ATOM cryptocurrency to your list of top crypto assets? 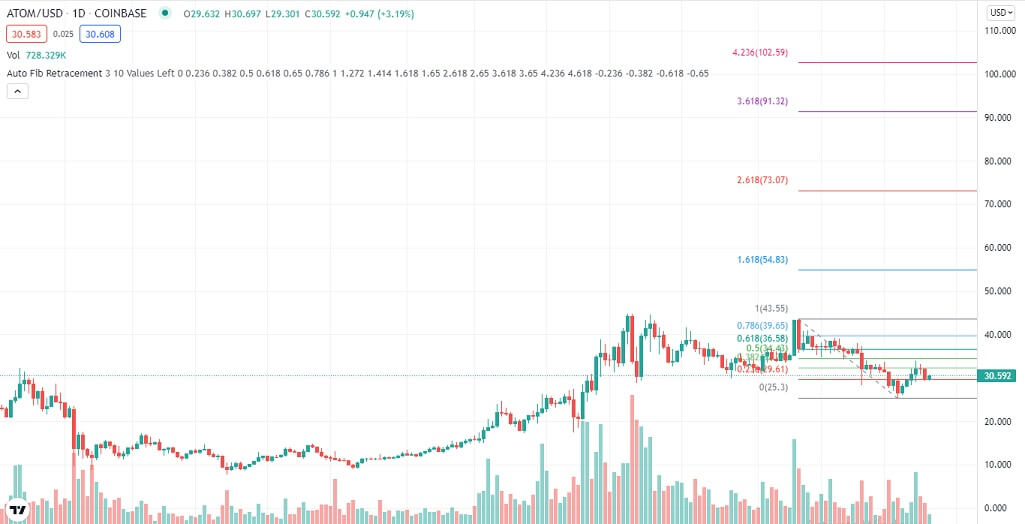 5 Hot Cryptocurrencies That Could Continue To Beat The Market

7 Top Cryptocurrencies That Could Make You A Millionaire

What Top 10 Cryptocurrencies To Invest In

Which 7 Cryptocurrencies Are Worth Buying