Binance Coin corrected from the recently traded all-time highs of $693. The retreat was not unique to the exchange native token because assets such as Bitcoin and Ethereum incurred significant losses. At the time of writing, Binance Coin trades at $645, following a recovery from $600. If the technical picture continues to improve, Binance Coin will likely lift to $700 in the near term.

Binance Coin has been in the spotlight for listing Shiba Inu (SHIB), a Dogecoin-like cryptocurrency. Following the support, Shiba Inu rallied to new all-time highs of around $0.00004. However, an immediate correction occurred with SHIB diving to $0.000031. Meanwhile, the token has a market value of $0.000035 amid a sideways trading pattern.

Shiba Inu is said to have similar features with Dogecoin; besides, they are regarded as meme coins. It is essential to realize that both of these tokens have massive vibrant communities. Note that SHIB differs from Dogecoin because it is a native token of ShibaSwap, a decentralized exchange platform.

Binance exchange has come under fire for listing what looks like a copycat of DOGE. However, according to the CEO of the exchange, Changpeng Zhao, the listing came after a growing user demand and that it is in no way promoting the token.

“Some have voiced concerns about $SHIB listing. We follow users. There is a large number of users demanding it, to the point where we ran out of ETH deposit addresses due to SHIB today. Never happened before for any other ERC20 coin. Not endorsing it. Super high risk. NFA.”

Following the upswing from $600, BNB has sustained an uptrend, almost hitting $650. A tentative resistance at the 50 Simple Moving Average (SMA) has been broken, allowing bulls to shift attention toward $700.

All short-term technical levels are improving in support of the bullish narrative. For example, the Moving Average Convergence Divergence has a bullish impulse that may become stronger if the MACD line (blue) crosses above the signal line. 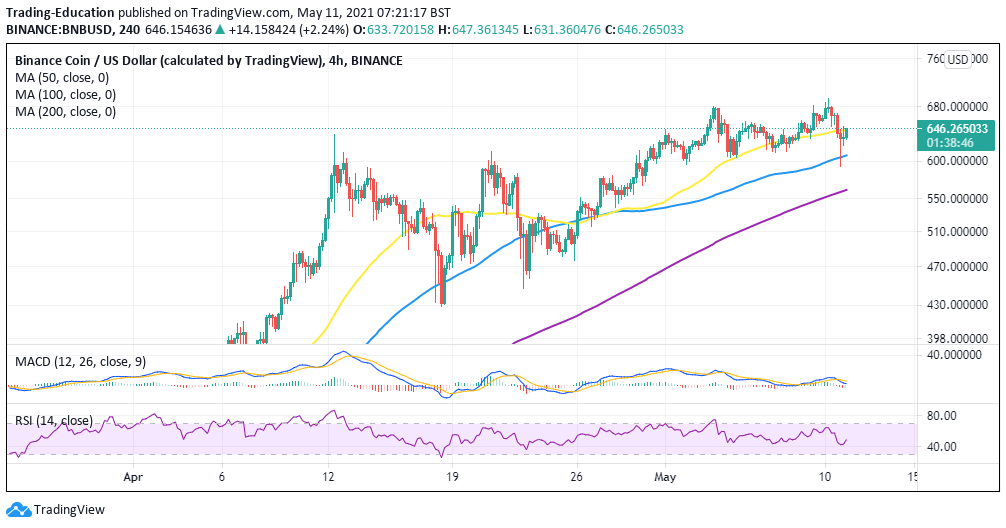 The Relative Strength Index (RSI) has also bounced off support at 40 is pointing toward the overbought region in the validation of the uptrend. Note that a break past $680 could trigger massive gains toward $700. However, if the uptrend stalls at this level, overhead pressure may lead to a breakdown back to $600.