Bitcoin Cash has had an extremely bearish week so far, and it looks like they are on the verge of completely nullifying the gains the buyers made last week. Over this week, the Bitcoin fork has dropped from $350 to $279.

After facing rejection at the $350 resistance barrier, the price has been on a complete downtrend. This week’s losses have pushed BCH below the 20-bar SMA. It is presently sitting on top of the 50-bar SMA.

Looking at the daily chart, we can see that BCH had the most bearish day since September 3 this Wednesday. During its downtrend, the Bitcoin Cash has managed to flip the 50-day SMA from support to resistance. 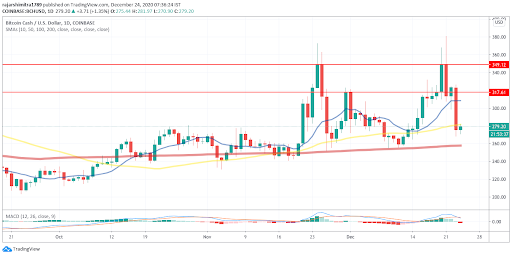 The moving average convergence/divergence (MACD) shows that the overall market momentum has reversed from bullish to bearish. If the price gets rejected further at the 50-day SMA, then we can expect it to drop to the 200-day SMA ($258). A further break below that could be pretty catastrophic.

Bitcoin Cash bears will be aiming for the 200-day SMA ($258). On the other hand, the bulls will need to flip the 50-day SMA from resistance to support as quickly as possible.

Bitcoin Cash
BCH
Top Brokers in
All Regulated Brokers
67% of retail clients lose money when trading CFDs with this provider.