Bitcoin Cash is at its highest price level since 2018. The cryptocurrency has seen a surge in price since the start of the year. Despite some volatility, the overall sentiment is very bullish.

Bitcoin Cash has also received public support from crypto experts like Roger Ver, who believe that Bitcoin Cash is the next big cryptocurrency. The latest rally is a result of a very public endorsement by Kim Dotcom, the founder of Megaupload.

Bitcoin Cash has outperformed most cryptocurrencies over the past few months, so let us take a look at the Bitcoin Cash price prediction for 2021 and beyond. Let us take a quick look.

What is Bitcoin Cash?

Bitcoin Cash came into existence in 2017, when Bitcoin underwent a hard fork. The hard fork was initiated because a group of miners had concerns about the future of Bitcoin. The developers and miners doubted Bitcoin's ability to scale and were concerned about the slow transaction speeds on the Bitcoin network.

The developers and miners realized that they could solve the problem in two ways. They could increase the block size so that more data could be processed or reduce the amount of data in each block. This would make transactions on the network quicker and cheaper. However, they could not reach a consensus, and thus, some developers and miners initiated a hard fork, and Bitcoin Cash was created.

Before looking at Bitcoin Cash price predictions, let us look at the cryptocurrency's price history and how it has changed over the years. Bitcoin Cash started with a price of $509 in July 2017. The price quickly fell, and by the first week of August, the price had dropped to $209. This volatility persisted even though Bitcoin Cash saw its first significant rally when the price shot up from$295 to $828 in less than a week. It could not maintain this price level and quickly fell to $314 by 14th October 2018.

The price then rose to $298 on 4th April and continued to increase. By the end of May, the price had reached $450. It went close to breaking the $500 price barrier, and although Bitcoin Cash came close, it could not go past $500. Instead, the price fell back down to $284. The rest of 2019 did not see much movement in the price of the cryptocurrency.

However, the cryptocurrency saw an increase in price in February 2020 when its price rose to $474 on 13th February 2020. However, again it could not hold this price, and by the middle of March, it had fallen to $149. The price stayed below $300 until November 2020, when it finally broke the $300 barrier again. Since the start of 2021, Bitcoin Cash has seen a sustained rally, driven partly due to a public show of support by Kim Dotcom. 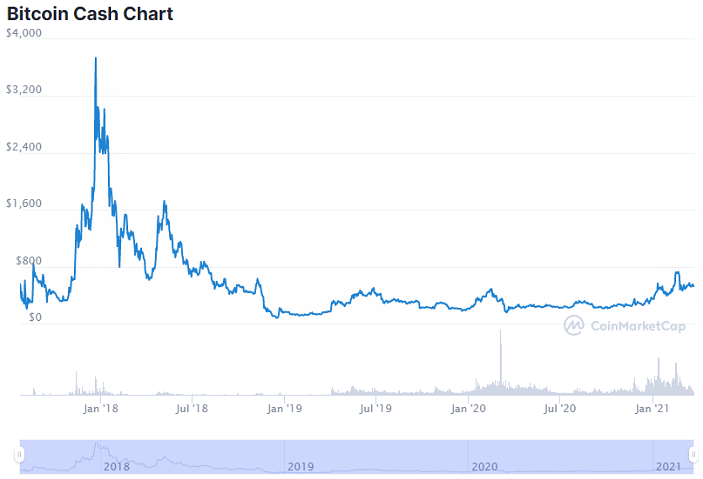 Bitcoin Cash ended 2020 at a price of $359 and has since seen a gradual price increase. By 4th January, the price had increased to $419 and further jumped to $605 by 11th January. The cryptocurrency encountered some volatility at this point, and the price fell to $377 by the end of the month. However, the price picked up once again, and by 11th February, it had reached $494, ready to break the $500 mark.

Bitcoin Cash breached $500 in spectacular fashion when the price rose to $724 in a matter of days. Since then, the price has reencountered volatility and dropped down to $529 at the time of writing this piece. However, most analysts predict a bullish year for Bitcoin Cash.

Bitcoin Cash has undoubtedly gained prominence since the start of 2021, and most price predictions state that the cryptocurrency could see a significant increase in its price in 2021. Even though there may be a bit of volatility in the market, the general trend would be an increase in the price.

Financial experts believe that Bitcoin Cash could reach the $1000 mark by the end of 2021.

Bitcoin Cash's price will find some stability in 2022, with the volatility giving way to some amount of stability. Price predictions for 2022 vary, but crypto analysts and experts agree that it could hover around the $700 to $1000 mark in 2022. Any sudden increase or decrease in price does not seem to be on the horizon for 2022.

There are several price predictions that state that the currency could break the $1000 mark in 2023. However, some analysts believe that Bitcoin Cash could see a minor correction in its price, which could see the price come down a little bit. However, most experts are quite bullish on Bitcoin Cash, even if there is a price correction.

Most analysts agree that Bitcoin Cash's price could see a significant increase in 2024. Whether the cryptocurrency will see a sustained rally or a gradual increase in price remains to be seen. However, the overall sentiment around Bitcoin Cash will remain overwhelmingly positive.

The Bitcoin Cash price forecast states that the cryptocurrency will test new highs in 2025. It isn't expected to go as high as it did during its rally in 2017, but most analysts predict that Bitcoin Cash's price could double in 2025.

What Are Cryptocurrency Experts Saying About Bitcoin Cash?

TradingBeasts has gone with a conservative price prediction for Bitcoin Cash. According to its projection, the digital asset will be valued around $466-$686 by the end of 2021. However, they predict that BTC will see an increase in price over 2022 and 2023.

Wallet Investor believes that BCH will be able to go beyond $1000 over the next few years.

LongForecast has a fairly negative price prediction for Bitcoin Cash. It predicts that BCH's price will pick up towards the end of 2022 but after 2023 it will gradually decline.

Bitcoin Cash has also received public backing from cryptocurrency experts like Robert Ver and also from Kim Dotcom, further boosting investor interest. Before investing, ensure that you have done your research thoroughly, as cryptocurrencies are notoriously volatile, and the price could change at any second depending on market sentiment.

What is Bitcoin Cash?

Bitcoin Cash is a result of a hard fork initiated in the Bitcoin blockchain in 2017. It is another version of Bitcoin that uses new features and rules to address Bitcoin's scalability issues.

Is Bitcoin Cash a profitable investment 2021?

How do you mine Bitcoin Cash?

Bitcoin Cash uses the same Proof-of-Work consensus mechanism that Bitcoin uses. It can be mined using CPUs and GPUs.

How can I acquire Bitcoin Cash?

If you want to buy Bitcoin Cash, you can do so from cryptocurrency exchanges or through peer-to-peer exchanges. You can also mine Bitcoin Cash.

Bitcoin Cash may not fail. Its price may see some volatility, but it could be a robust investment asset. Most experts predict that the currency will see significant growth in the long-run.

Is Bitcoin Cash better than Bitcoin?

Bitcoin Cash improves upon some Bitcoin features like block size and transaction speeds, making it more scalable than Bitcoin. However, as an investment asset, Bitcoin is the more sought-after investment, although Bitcoin Cash is catching up.

Bitcoin vs Bitcoin Cash: Which Crypto Should You Buy in 2021

How to Buy Bitcoin Cash BCH: A Step-by-Step Guide