Bitcoin Cash has been on a heavy descent over the past three days. It looks like the holders have chosen the $350 psychological level as an ideal point for sell-off. After three days of heavy selling, the price has reached the $300-mark.

After reaching the highs of $350, the relative strength index (RSI) was following the price and about to enter the overbought zone. Before the asset could get overpriced, the sellers stepped in and managed to take the price down and the RSI back into the neutral territory.

IntoTheBlock’s IOMAP helps us visualize strong resistance and support levels. On the downside, there seems to be a healthy support wall at $305. Previously, 144,500 addresses had purchased 1.27 million ETH tokens at this level.

A break below this barrier will take the Bitcoin fork down to the 20-day SMA ($290). The upside is closely guarded by the $330 wall, which appears strong enough to thwart any weak bullish comeback attempts.

The CEO of Megaupload, Kim Dotcom, has recently predicted that Bitcoin Cash (BCH) will climb up to 900% in 2021. In a recent tweet, Dotcom noted that Bitcoin is the best option for asset storage. However, according to him, BCH is excellent for payments. 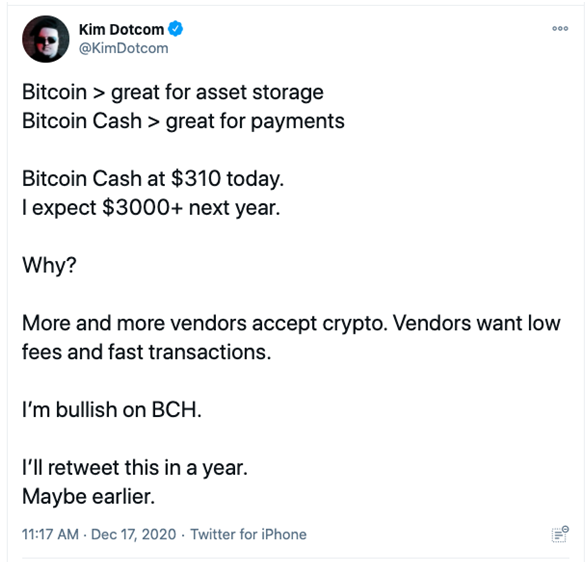 Dotcom’s tweet caused a mixed reaction in the crypto community. Several experts disagreed with Dotcom that BTC is perfect for asset storage, and BCH is suitable for payments. However, Josh Ellithorpe, a software engineer, agreed with Dotcom and said that BCH is currently undervalued.

Ellithorpe added that the coin poses a huge opportunity for cryptocurrency adopters that are not lost in maximalism. Dotcom concurred with Ellithorpe, adding that the BCH has a lot of potential for crypto enthusiasts that missed out on investing in BTC early. Dotcom’s tweet comes after Bitcoin recently moved past its previous all-time high.

As of now, the $305 support wall is absolutely crucial. If the price manages to break below that, it could be catastrophic. On the upside, the buyers must gain enough momentum to break above the $330 resistance line.

Bitcoin Cash
BCH
Top Brokers in
All Regulated Brokers
67% of retail clients lose money when trading CFDs with this provider.