Bitcoin Price Analysis: BTC/USD faces retracement even as bulls go all in

While Bitcoin was on the verge of breaking past its all-time high levels, it seems like the premier cryptocurrency has instead opted to settle for a short-term correction. To many, this correction is long overdue and necessary since it will provide sidelined investors with an opportunity to re-enter the market.

The buyers will hope for the 20-day SMA to stay strong and stem any downward flow. However, if the sellers manage to break below this level, the next viable support barrier lies around $16,000. Adding further credence to our bearish thesis is the monthly chart.

Vijay Ayyar, the head of business development with crypto exchange Luno, believes that price may be overextended here as anywhere “from between $18,000-$19,000 is potentially a top.” Ayyar theorizes that since many people have bought in at these levels during the 2017 rally, they may be looking to sell and break even. “Major rallies in the past always had 30-40% corrections. No reason to believe this time is different,” Ayyar concludes.

The bulls remain high on Bitcoin

Despite this retracement, the institutional bulls remain high on Bitcoin. MicroStrategy, a business intelligence company, had previously bought $425 million worth of Bitcoin. Michael Saylor, the company’s CEO, announced on Twitter that they had purchased a further $50 million worth of BTC. 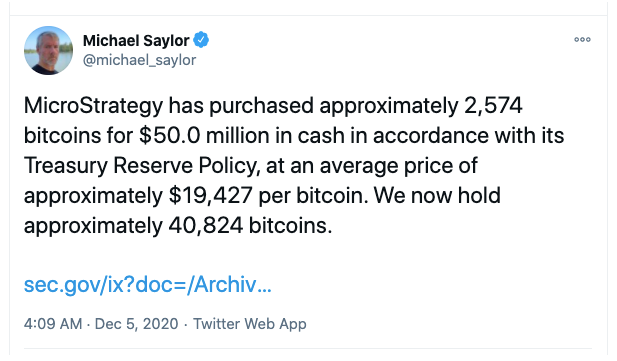 Saylor had previously stated that the current macroeconomic conditions had turned Bitcoin into one of the world’s most valuable assets.

“Bitcoin is a dematerialized monetary network and it’s still early on in its life cycle… The best time to invest in anything is when it’s big enough to be sure it’s going to work and that means more than $100 billion dollars (market cap) and dominant in its industry and when it’s small enough that everybody else doesn’t understand it and the majority of the people aren’t quite sure what [Bitcoin] is.”

MicroStrategy isn't alone in its bullish outlook. Paul Tudor Jones, one of the most legendary Wall Street investors, announced that he would be buying BTC as a safe haven against the pandemic-induced inflation. Jones likened Bitcoin to the gold trade in the ’70s and investing in Google and Apple in the '90s. However, he noted he is still a conservative player since Bitcoin hasn’t yet stood the test of time.

Key price levels to watch out for

As noted before, with the price presently in a downtrend, there are three support walls for investors to watch out for. Firstly, we have the 20-day SMA curve. A break below the curve takes BTC down to $16,000. A further break can be pretty catastrophic as it will take the price all the way down to $13,800.

However, our outlook isn’t this pessimistic. We believe that this is a short-term price retracement (probably till $16,000) before Bitcoin makes a break for $20,000.