Between April 26 and May 8, the Bitcoin price jumped from $49,000 to $58,800m, gaining almost $10,000 in its overall valuation. During this surge, they managed to flip the 20-day and 50-day SMAs from resistance to support. However, at this rise, the BTC price had three straight bearish sessions.

The Bitcoin Price Flips Back 50-day SMA To Support

Over the last three days, the Bitcoin price crashed from $59,000 to $55,300 – losing over $3,5000 in its overall valuation.  During this downward fall, the premier cryptocurrency managed to flip the 50-day SMA from support to resistance. As things stand, BTC is sitting on top of the 20-day SMA. However, the MACD shows sustained bullish market momentum, despite this temporary correction.

Let’s go through some of Santiment’s charts and observations about Bitcoin.

According to data from over 1000 crypto-related channels, Bitcoin’s daily social volume has ostensibly dropped since its Tuesday peak, shrinking by -48.7% over the last 5 days. This tells us that the buyers are more interested in other narratives right now.

A funding rate is a fee paid by one side of the perpetual contract to the other. A positive funding rate implies that there’s a bullish bias among traders, as BTC longs are paying BTC shorts. At the time of writing, Bitcoin’s funding rate hovers at 0.03% on BitMEX, 0.01% on Huobi and 0.05% on Kraken, all of which are very low, which shows decreasing activity.. 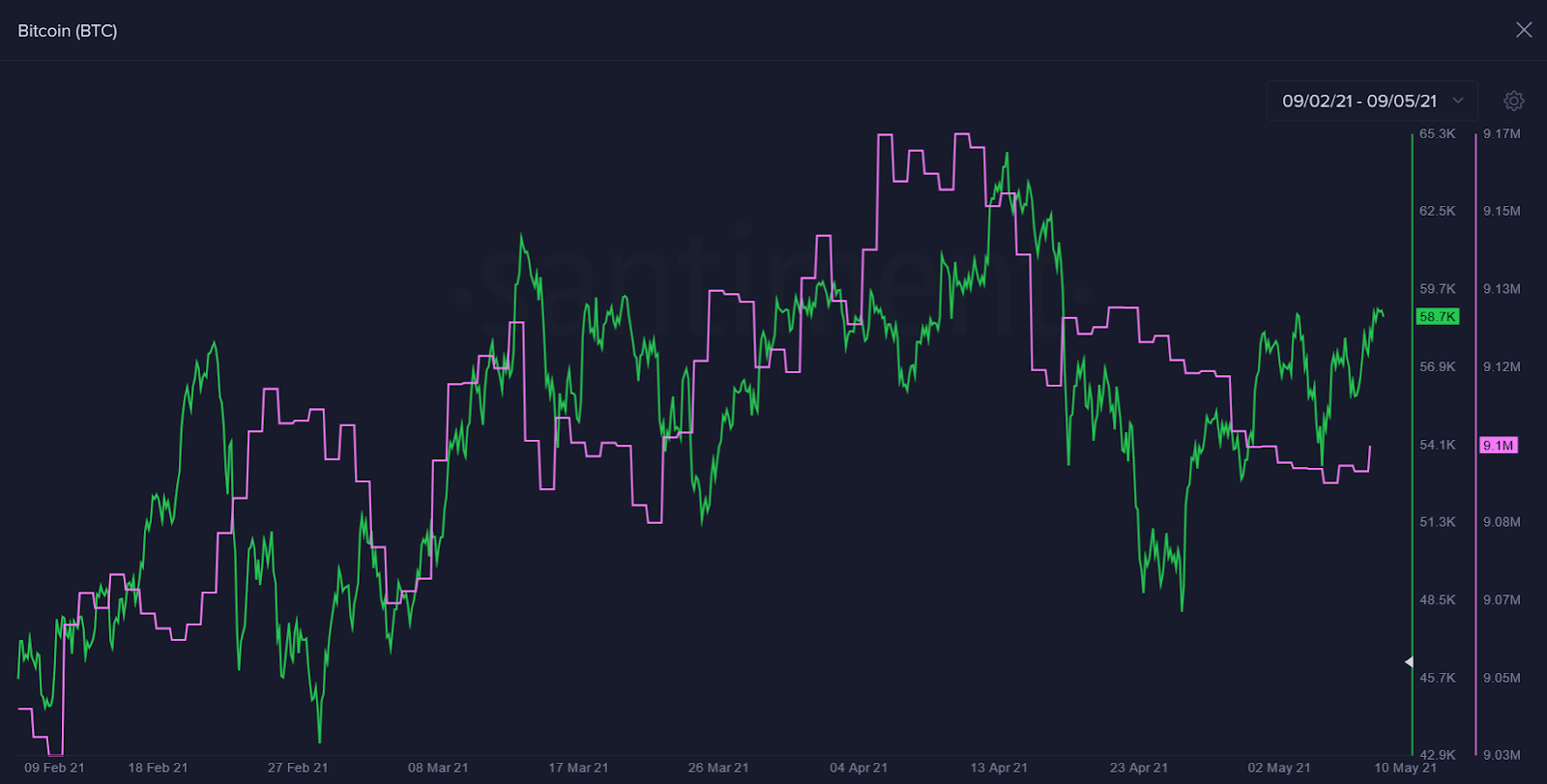 Let’s look at the address activity of those holding 100 - 10,000 BTC (i.e. BTC millionaires). The combined balance of these addresses has been in a state of decline since Bitcoin’s price ATH, implying a potential lack of confidence by some BTC whales.

Aqumon’s latest offering with SGX integrates the firm’s flagship SmartGlobal algorithm with exposure to regulated Bitcoin Exchange Traded Funds (ETFs) in Canada. This is aimed at providing a way to invest in securitized cryptocurrency assets for investors looking to diversify their portfolios with Bitcoin.

Kelvin Lei, CEO and co-founder of Aqumon told Forkast.News in an interview

There has been a growing environment focused on how to apply Bitcoin investment into ETFs as they are the benchmark of how to change currencies into securitized vehicles that can be traded into the secondary market.

The process of investing in Bitcoin raises risks surrounding cybersecurity and regulatory risks to many investors. However, Lei said that the ETF format is a "powerful solution to these problems."

Aqumon’s SGX leverages big data technology and advanced algorithms to select high-quality stocks, bonds, and alternative assets for its clients' portfolios. Lei added that the firm's extensive backtesting results of SmartGlobalX showed an annualized return that is as high as 18.95%.

Bitcoin price is stuck between the 20-day and  50-day SMA, a further downtrend will take BTC to the 20-day SMA. BTC holders will hope that these two lines hold strong to prevent a catastrophic crash.