Since March 25, the Bitcoin price has jumped from $51,130 to $58,600, gaining more than $7,000 in its overall valuation. During this upward surge, the 2-month upward trending line and 20-day SMA has flipped from resistance to support.

The upward trending line has managed to keep the Bitcoin price up despite the bearish corrections. During this upward surge, the parabolic SAR has flipped from negative to positive. However, a further rise in price will take the RSI to the overbought zone, which could trigger another bearish correction. 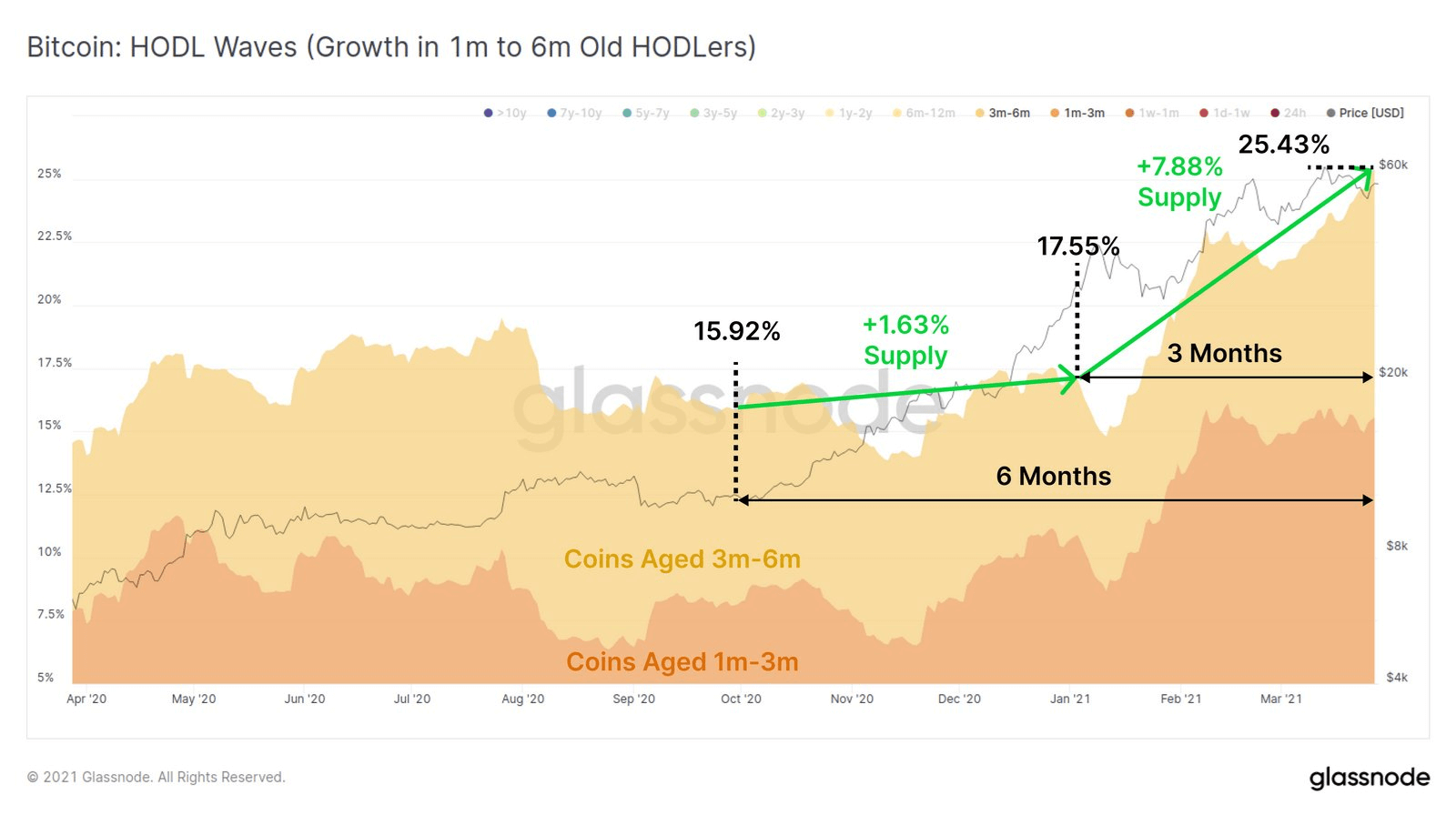 Glassnode noted that the users are holding on to their Bitcoins, instead of selling. Glassnode tweeted:

“$BTC coins mature into older lifespan brackets when they remain unspent. In the last 6mths, over 9.51% of $BTC supply has matured into the 1m-6m age range. These #Bitcoin were acquired during this bull market.”

In a recent Fortune interview, Amrita Ahuja, the CFO of Square, shared her thoughts on Bitcoin. Ahuja asserted that cryptocurrencies are a part of an evolution of financial services globally.

Notably, Square and MicroStrategy were among the first publicly traded companies in the US to add BTC to their treasuries. They reportedly did so to protect the value of their firms amid an inflationary macroeconomic environment. The executive stated that the company’s long-term plan is to maintain its investment in Bitcoin.

There’s absolutely a case for every balance sheet to have Bitcoin on it. The investment that we made on our balance sheet for Bitcoin represents about 5% of our cash; we intend to hold for the long term.

The COVID-19 pandemic expedited the adoption of digital payment methods and cryptocurrencies. Commenting on this, Square’s CFO said that in January 2021 alone, one million new consumers used Cash App to buy Bitcoin. In 2020, over three million people used Square’s product to trade with BTC.

The executive also revealed that Square has eliminated transaction fees within the Cash App for crypto users. Parallelly, the company plans to allocate grants to Bitcoin developers to support the growth of the ecosystem.

Fidelity Digital Assets has recently partnered with crypto-friendly bank Silvergate Capital to offer Bitcoin-collateralized loans. According to a press release, Silvergate customers can now use Bitcoin as collateral for borrowing US dollars from the bank via its lending product, SEN Leverage.

Silvergate's Jon Melton mentioned that institutional investors will now have better access to capital because of the partnership.

With Fidelity Digital Assets on board, we’re combining our exceptional lending program with a leading custody services platform, providing investors with greater access to capital.

SEN Leverage saw its volume surge to $82.5 million by the end of Q4 2020. Silvergate began accepting cryptocurrency exchanges as its clients back in 2013 when it was perceived as a reputational risk. However, it went on to become the preferred destination for industry startups.

According to an earlier report, Fidelity filed with the US Securities and Exchange Commission (SEC) to launch a Bitcoin exchange-traded fund (ETF). It has joined a suite of institutional players that want to achieve a similar feat.

Bitcoin price is expected to break above the $59,000 resistance barrier and reach the $60,000 level.