Between June 15 and June 22, the Bitcoin price has dropped from $40,500 to $31,500 – losing $9,000 in its overall valuation. During this crash, BTC managed to flip the 20-day SMA from support to resistance. However, it seems like the buyers have somewhat retaken control after this crash.

Bitcoin Price Bounces Up From $31,500 Support

The Bitcoin price bounced up from the $31,500 support wall over the last two days and is currently priced at around $33,400. The MACD has reversed from bullish to bearish, so a further drop is expected. As per the TD sequential detector, BTC could drop for two more sessions before flashing the bullish red-nine candlestick.

As already mentioned, the Bitcoin price has strong resistance at the 20-day SMA ($36,500). As per the IOMAP, over 1.25 million addresses had previously purchased almost 500,000 BTC at this level. 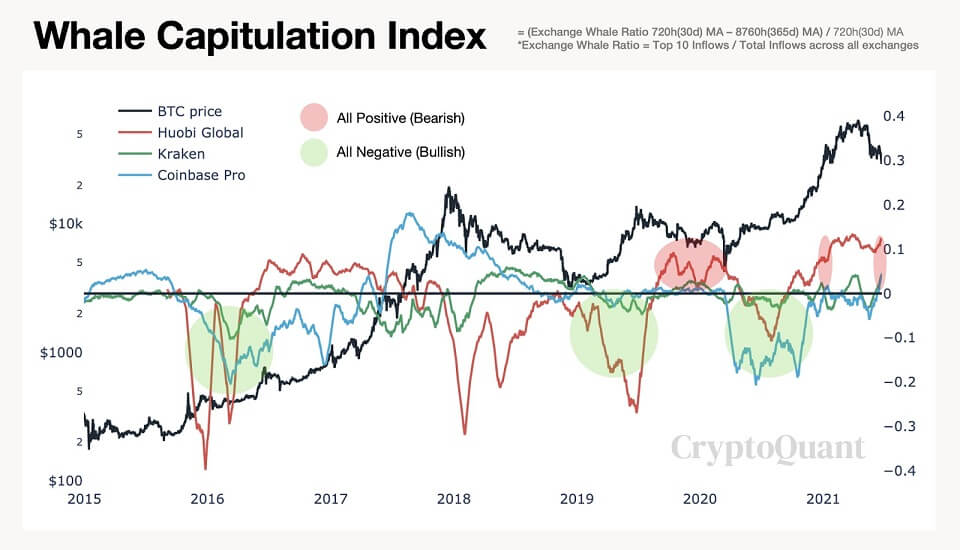 CryptoQuant CEO Ki-Young Ju shared the above chart and the following analysis:

“Since most exchanges like Binance launched in 2017-18, we need to look at each exchange's data. The aggregated one contains outliers before launching exchanges. When this indicator was low(negative) across most exchanges, it's likely to be bullish. Otherwise, it was bearish.

My bearish bias could be wrong, but my point is this is a pretty unusual situation that whales are active across most exchanges.”

Wealth manager Vaneck recently filed a prospectus to launch a Bitcoin Strategy Fund. The prospectus filed with the US Securities and Exchange Commission (SEC) explained the fund would procure bitcoin exchange-traded products and futures.

While Vaneck waits to hear a decision about its exchange-traded fund (ETF) registration, the company applied with the SEC to release a mutual fund for investors who want exposure to BTC. The registration filed also noted that in addition to the Fund’s Bitcoin-related investments, “the fund expects to have significant holdings of cash and fixed-income investments.”

Vaneck plans to invest in Bitcoin futures contracts, leverage the CME CF Bitcoin Reference Rate (BRR), and also “invest in pooled investment vehicles that invest directly or indirectly in bitcoin.” The crypto mutual fund is called the “Bitcoin Strategy Fund," and the fund’s “share price and return will fluctuate with changes in the market value of the fund’s portfolio securities.”

The fund Vaneck discussed in its prospectus will not procure Bitcoin (BTC) directly. The filing also mentioned the risks involved with cryptocurrency markets. An excerpt from the filing reads:

The value of bitcoin and, therefore, of the fund’s bitcoin-related investments, could decline rapidly, including to zero. You should be prepared to lose your entire investment.

Vaneck further detailed that the fund’s risks are not solely tied to the volatility of Bitcoin prices as the fund comes with other risks. The wealth manager’s registration form with the SEC mentions the risks involved with pooled investment vehicles, target exposure and rebalancing, borrowing and leverage, tracking errors, credit issues, and interest rate discrepancies.

Meanwhile, Vaneck has been active in Europe with its exchange-traded products, and the wealth manager is also looking to launch an Ethereum-based ETF. Vaneck’s proposed ETH ETF filing is aiming for a Cboe BZX listing.

The buyers will need to take down the 20-day SMA to reverse the negative momentum.