Bitcoin Price Analysis: BTC Breaks Down Towards The $46,000 Support

As you can see the Bitcoin price failed at the 20-day SMA before dropping down to the $46,750 and breaking down to the $46,000 support. The relative strength index (RSI) is hovering in the neutral zone so a further drop is expected.

Santiment released a report on the latest action in Bitcoin price. During this report, they shared the following chart. 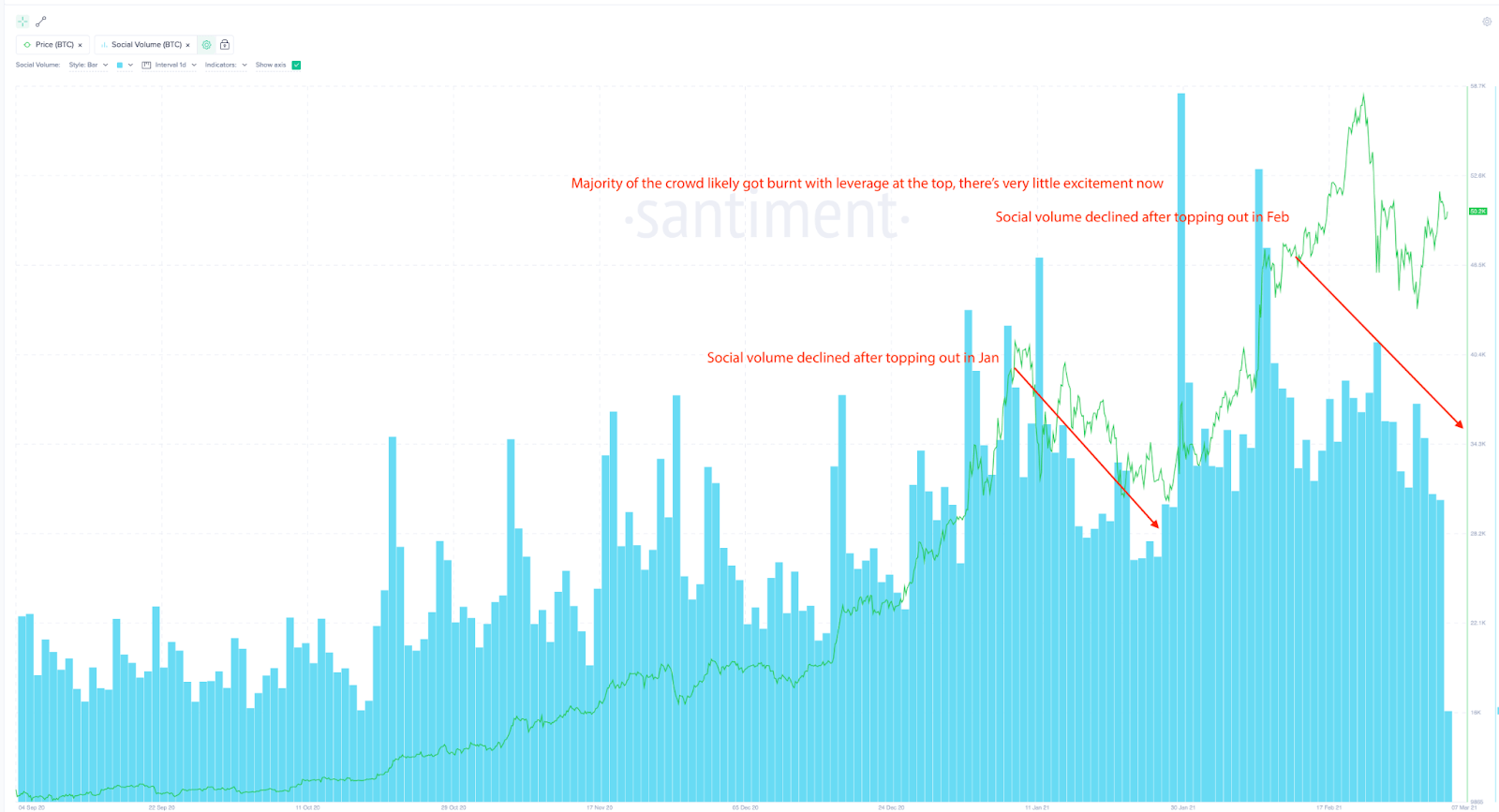 “BTC's Social Volume is declining since the drop, suggesting the the interest around BTC has waned by quite a bit. In fact, during the run-up, interest levels weren't keeping up with the price, which in hindsight, was a warning. It's very likely that majority of the crowd got burnt right at the top during the massive liquidation event that saw $4.4B wiped out. As mentioned previously, it'll take some time before they step back in to speculate.”

Now, this is actually a good sign, since it shows that the amount  of FUD and FOMO dictating the Bitcoin price is going down. So , this is likely a necessary correction.

Online Businesses Can Now Get Paid in Bitcoin, Ethereum, Tether With Bitfinex Pay

Bitfinex exchange has recently announced the launch of Bitfinex Pay - a new simple, fast and cost-effective way for businesses to accept payments in crypto. According to CityAM report, any website facilitating online payments can integrate the Bitfinex Pay widget on the website.

Bitfinex Pay enables website users to pay with Ethereum (ETH), Bitcoin (BTC), Lightning Network BTC (LN-BTC) and Tether tokens (USDT) via Ethereum or Tron. The report noted that payments will be directly deposited into a merchant’s exchange wallet on Bitfinex.

This is the age of digital money, and with Bitfinex Pay we’ve created an intuitive and seamless way for online merchants to receive payments in crypto. Bitfinex Pay enables merchants to be easily equipped to support crypto payments as increasing numbers of consumers become more comfortable with paying for goods and services using digital tokens.

The CityAM report added that customers using the website to make payments can simply click on the Bitfinex Pay button and they will be directed to the payment gateway. After the payment is completed using crypto, customers will be redirected back to the website.

Crypto analyst and macroeconomist Alex Krüger explained why Bitcoin is not getting negatively affected by rising real interest rates. A real interest rate is an interest rate that has been modified to mitigate the effects of inflation to reflect the real cost of funds to the borrower and the real yield to the lender (or to an investor). The real interest rate reflects the rate of time-preference for current goods over future goods.

He added that although rising real rates negatively impact the Bitcoin price, real rates are not the only price determinant for Bitcoin:

Prices tell you real rates have become a secondary factor for $BTC. Were that not the case, $BTC would be getting trashed, like gold is. Rising reals still represent a headwind by reducing institutional demand and negatively impacting risk sentiment.

He further mentioned that real rates are not the only variable. Many people want to acquire Bitcoin “regardless of what rates are doing.” Rates and governments’ response to the COVID pandemic opened the floodgates. “You can slow the flow, but can’t close them,” he added.

Bitcoin Price Is Expected These Levels

The Bitcoin price is likely going to drop to the $46,000 support wall.