Bitcoin Price Analysis: BTC bulls face one critical resistance on path back to $20,000

Bitcoin has been grabbing all the headlines of late, and for a good reason. From institutions to regular investors, it seems everyone wants a slice of the Bitcoin pie. This positive sentiment has been reflected in the price action since BTC stands just a hair’s breadth away from the $20,000 zone.

Two weeks-old resistance in the way

The bulls initiated their rally this weekend and have managed to string together four straight positive days. The price has gone up from $18,000 to $19,360, crossing above the 20-day SMA in the process during this rally. The moving average convergence/divergence (MACD) suggests that the momentum is about to reverse from bearish to bullish.

As can be seen, there is a strong resistance at $19,725, which stopped the price from moving ahead two weeks back. The buyers have to overcome this level to creep back into the $20,000 zone. Upon observing the 4-hour chart, we can see two short-term resistance barriers that the buyers need to overcome at $19,375 and $19,700.

However, the relative strength index (RSI) is trending around 66.55, right next to the overbought zone. If the positive price action does push the RSI above 70, it could trigger a short-term correction.

Half a billion Bitcoin withdrawn from exchanges

Adding further credence to our bullish POV, it turns out that Bitcoin has recently witnessed its biggest one-day drop in amounts held on exchanges. According to Santiment, approx 29,709 Bitcoins (worth $570 million) were withdrawn just a few days back. The data analytics startup noted that this is the most significant single-day drop since April. 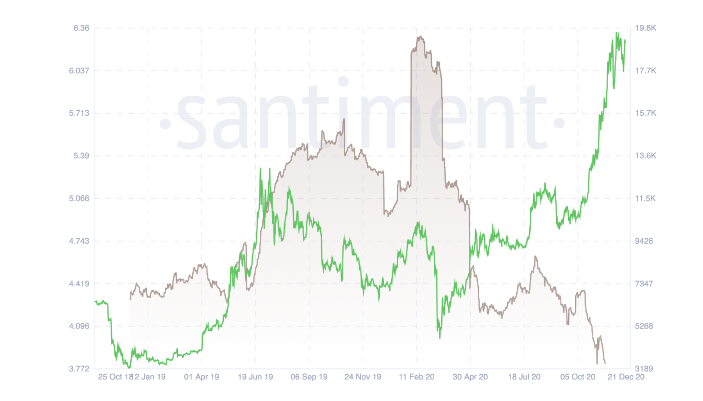 The amount of BTC held on exchanges appears to be on a decline. Exchanges had 6% of the overall Bitcoin supply at the beginning of the year. The number dropped to just a little over 4% in October and 3.8% in November. In December, this amount fell even further to 3.7% (684,000 bitcoins worth $13 billion).

According to a Trustnodes report, data suggests that the 2019 rise to $14,000 was not sustainable as the selling supply increased with more Bitcoins moving to exchanges. This might not be the case in 2020 as the two metrics are moving in the opposite direction (possibly due to the halving). Therefore, Miners might not be able to increase the selling pressure as they could in 2021 as they receive less Bitcoin now.

Abigail Johnson, the CEO of Fidelity Investments, has said that the company’s Bitcoin custody business has been "incredibly successful.” Although she did not provide any specific information, Johnson noted that Fidelity is working hard to connect the legacy world with the future of digital assets.

In a recent interview with Barron’s, Johnson said:

Building those on and off ramps around facilitating the trading between fiat currencies and cryptocurrencies is something that's happening now, and I'm glad it's moving along.

We've got a lot of good momentum as a business, which is really exciting, and that's really what I sought to achieve when we moved into [crypto], so I'm really happy about that.

Institutions to put $600 billion into BTC, as per JPMorgan

One of the largest banks in the US, JPMorgan Chase, has estimated that up to $600 million could flow into Bitcoin. For this to happen, insurance firms and pension funds in Japan, Europe and the US should allot 1% of their assets into the flagship coin.

In a recent note, JPMorgan analyst Nikolaos Panigirtzoglou said that BTC’s institutional demand will increase in the coming years. According to an earlier U.Today report, Massachusetts Mutual Life Insurance Company surprised the cryptocurrency community by acquiring Bitcoin worth $100 million.

MassMutual’s Bitcoin purchases represent another milestone in the Bitcoin adoption by institutional investors. One can see the potential demand that could arise over the coming years as other insurance companies and pension funds follow MassMutual’s example.

The resistance at $19,725 is the most critical level to watch out for. Breaking past it takes the price to $20,000. However, a failure at that level drops the premier cryptocurrency to the 20-day SMA ($18,670). If the price drops further, the buyers will hope for the upward trending line to hold to prevent a catastrophic fall to the 50-day SMA ($17,000).