The Bitcoin price jumped from $33,050 to $48,000 since the beginning of February. In the process, BTC managed to flip strong levels from resistance to support. This jump in price came as Mastercard and BNY Mellon expressed their support for BTC. Let’s take a closer look with technical analysis.

With Bitcoin price crawling towards the $50,000-mark, we can see that the asset is getting more overpriced than ever before. However, as the relative strength index (RSI) crawls into the overbought zone, it could trigger a potential bearish correction.

Bitcoin price is sitting on top of two very healthy support levels at $47,000 and $46,000. The strongest level is at $46,000, wherein 488,400 addresses had previously purchased 328,400 BTC tokens. These two support walls are robust enough to absorb a tremendous amount of selling pressure.

The short-term outlook for Bitcoin price remains bullish. Firstly, the MACD is about to reverse from negative to positive. Plus, the parabolic SAR is about to flip from bearish to bullish. This tells us that BTC is going to reach new levels. 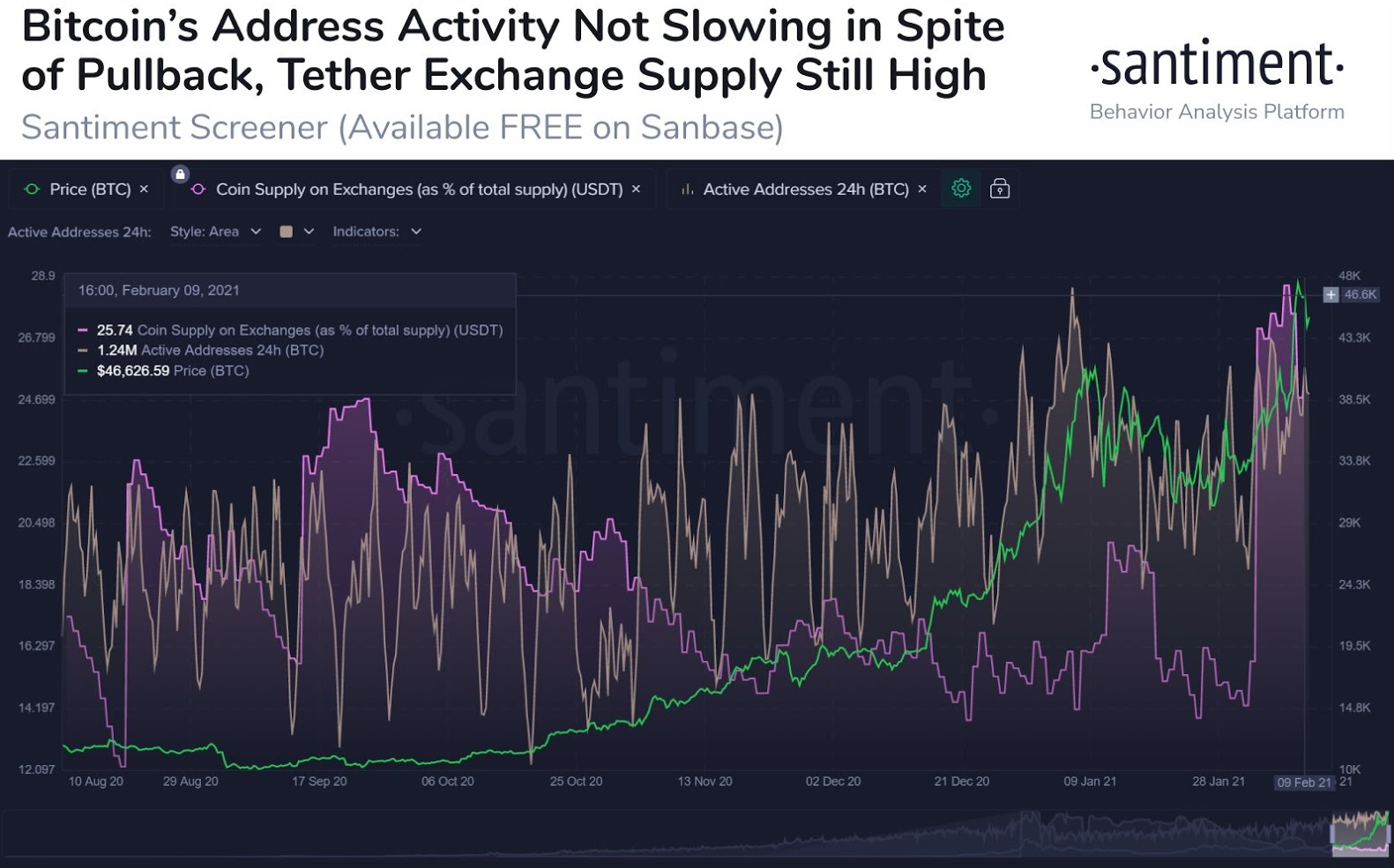 “Both #Bitcoin's active addresses and the exchange supply of #stablecoins like $USDT are remaining high, which is an encouraging sign.”

So, it looks like the metrics are looking very positive for Bitcoin price.

Mastercard and BNY Mellon recently disclosed their newly added support for Bitcoin. BNY Mellon, one of the oldest banks in the US, confirmed recently that it has created a new unit for customers to hold, transfer and issue digital assets.

Roman Regelman, head of asset servicing and digital at BNY Mellon, emphasized the "growing client demand for digital assets" and "improving regulatory clarity." He added that this was a tremendous opportunity for the bank to extend its current service offerings to the emerging field.

Just a couple of days back, MasterCard also announced that it would soon add support for cryptocurrencies on its platform. MasterCard’s Raj Dhamodharan said:

Doing this work will create a lot more possibilities for shoppers and merchants.

The payments company highlighted that digital assets are becoming a more important part of the payments world.

We are seeing this fact play out on the Mastercard network, with people using cards to buy crypto assets, especially during bitcoin's recent surge in value. We are also seeing users increasingly take advantage of crypto cards to access these assets and convert them to traditional currencies for spending.

Morgan Stanley Strategist: Crypto Is “Here To Stay as a Serious Asset Class”

Ruchir Sharma, the Head of Emerging Markets and Global Macro at Morgan Stanley, recently explained why “cryptocurrencies are here to stay as a serious asset class.” In a report, Sharma noted that some investors might think that Bitcoin is currently in a “bubble.” However, several others including Morgan Stanley believe that the current price is an indication that Bitcoin is “following the natural path of new inventions, in which investor interest comes first from venture capital, then from hedge funds, and finally — about 10 years on — from traditional Wall Street players.”

Sharma added that there are many reasons why cryptocurrencies are a serious asset class. The first one is the increasing distrust in fiat currencies because of the excess printing of money by central banks. The second is that younger people generally see cryptocurrencies as exciting progress as opposed to traditional fiat currencies, which come in the form of coins and notes.

Thirdly, the “unflinching demand from millennials has helped lower the volatility of Bitcoin, even during the pandemic”. Sharma said that in emerging markets, the level of distrust of central authority is even greater than that of millennials.

Although he acknowledged that Bitcoin is not going to “topple the dollar any time soon”, the strategist pointed out that “traditionalists continue to dismiss the seriousness of the crypto challenge at their own risk”.

An excerpt from the report reads:

So even if Bitcoin’s price pops, as it has before, the rush of 2020 can’t be dismissed as an irrational mania. Cryptocurrencies are still young, they still face growing pains. But they also promise speed, transparency, and low fees that traditional payment channels cannot match. They satisfy a growing demand for a digital alternative to gold, an asset likely to protect investors from massive money printing and the threat of inflation.

The Bitcoin price is going to reach the $50,000 mark before it faces bearish corrections.