Over the last four days, the Bitcoin price has managed to flip the $49,000 psychological level from resistance to support. Due to this bullish climb, the RSI has now been creeping along the edge of the overbought zone. Any sudden bullish movement could make BTC even more overpriced, which may trigger bearish correction.

Bitcoin miners are accumulating more BTC while long-term investors are realizing profits, according to Glassnode. Despite miners’ heavy selling in January, Glassnode’s report shows that miner outflows have dried up during February so far. 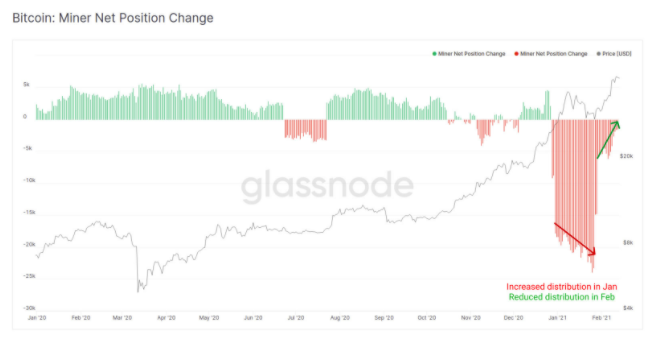 According to the report, miners and longer-term investors are the two main sellers of Bitcoin during bull markets. Glassnode noted that declining miner outflows can be inferred as bullish, with miners either having already covered their costs of operation or stockpiling coins. The latter could be in response to Tesla’s $1.5 billion Bitcoin investment.

An excerpt from the report reads:

This suggests that miners have either completed adequate sales to cover costs, or could also mean they see Tesla's vote of confidence as fair reason to keep a strong grip on their treasuries.

With miners now holding onto their Bitcoin, Glassnode concluded the majority of coins being sold in the markets are being off-loaded by longer-term investors. The analytics firm also noted that Coin Days Destroyed (CDD) shows that older coins are getting redistributed. Glassnode concluded that long-term investors have been taking profits since October - when BTC moved past $12,000. CDD is a measure of economic activity giving more weight to coins that haven't been spent for a long time.

An Overview Of The Nigeria Crypto Ban

Blockchain Industry Coordinating Committee of Nigeria (BICCON), has joined other crypto industry players to assail the recent Central Bank of Nigeria (CBN) directive to banks. BICCON is a body that represents crypto and blockchain stakeholders in Nigeria. The CBN implemented the order on February 5 2021 and it seeks to detach crypto entities from the banking system.

In a recent statement, BICCON dismissed the CBN’s assertion that the new directive is just a “mere reiteration” of what it said back in January 2017. The directive has effectively banned financial institutions from providing services to people and/or entities transacting in digital assets.

BICCON also rebuked the CBN for failing to give “any adequate notice or court order of any court of competent jurisdiction.” The body also highlighted the hastiness and the improper implementation of the order. It went on to reveal how some crypto firms have been impacted by this decision.

Since 5 February 2021, a number of persons and entities accounts have been closed. In one strange and exceptional case, the funds in the two corporate accounts of a cryptocurrency exchange were wiped out and then eventually closed.

BICCON noted that the ban might face legal hurdles as “there is currently no legislation by the National Assembly criminalizing or illegalizing trade in cryptocurrency in Nigeria.” Before BICCON released its statement, some members of the Nigerian Senate had also expressed opposition to the CBN directive. According to reports, the Nigerian Senate wants the CBN to explain the decision.

Notably, Senator Sani Musa has come out in support of the CBN directive. Musa claimed that cryptocurrencies, especially Bitcoin, have made the Nigerian currency “almost useless.” The Nigerian Security and Exchange Commission also said that it endorses the CBN directive.

Bitcoin price will keep trending below the $50,000 mark. We believe that BTC is eventually going to flip $50,000 into a powerful support line.