Between July 16 and July 18, the Bitcoin price was sitting on top of the $31,300 resistance barrier. However, the bears won the battle of attrition and were able to take BTC down to $30,750 and break below the $31,000 psychological level.

The bitcoin price needs to defend the support wall at $29,000. As per the IOMAP, almost 76,300 addresses had previously purchased almost 48,000 BTC at this level. 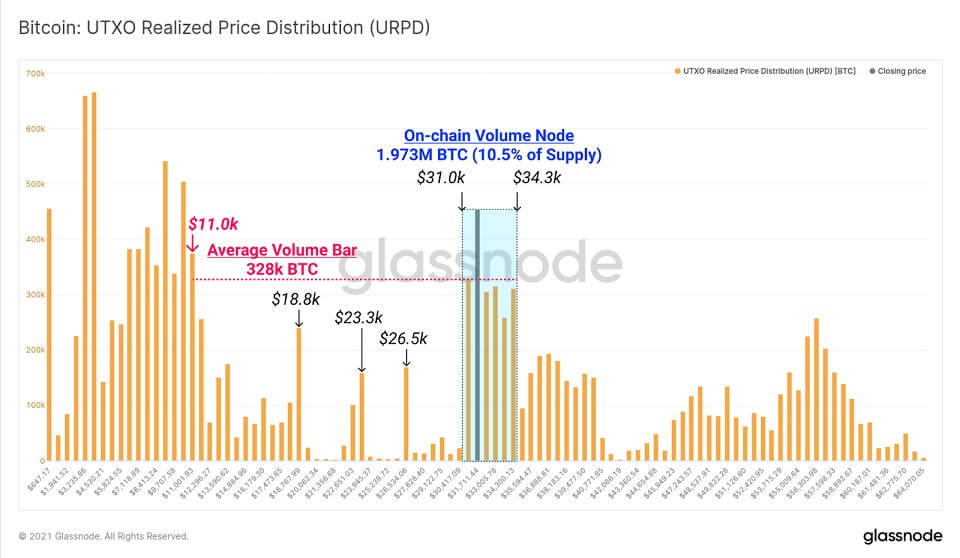 “Between $31.0k and $34.3k, coin volume equivalent to 10.5% of the circulating supply (1.973M BTC) have transacted, outsizing the previous high volume node established in the $50k-$60k range. However, the market is trading at the lower end of this support node and there are few comparatively few on-chain support levels below until $18.8k.” 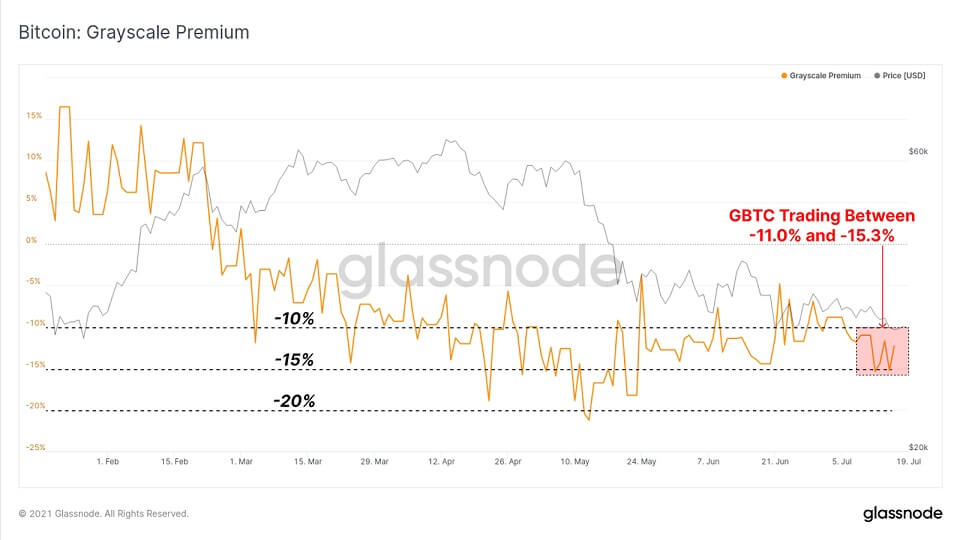 “The GBTC market price continued to trade at a notable discount last week, ranging between -11.0% and down to -15.3%. Whilst the discount has recovered from the absolute lows of -21.3% to NAV, any significant and persistent discount suggests lacklustre demand, and can also attract capital away from spot BTC markets.” 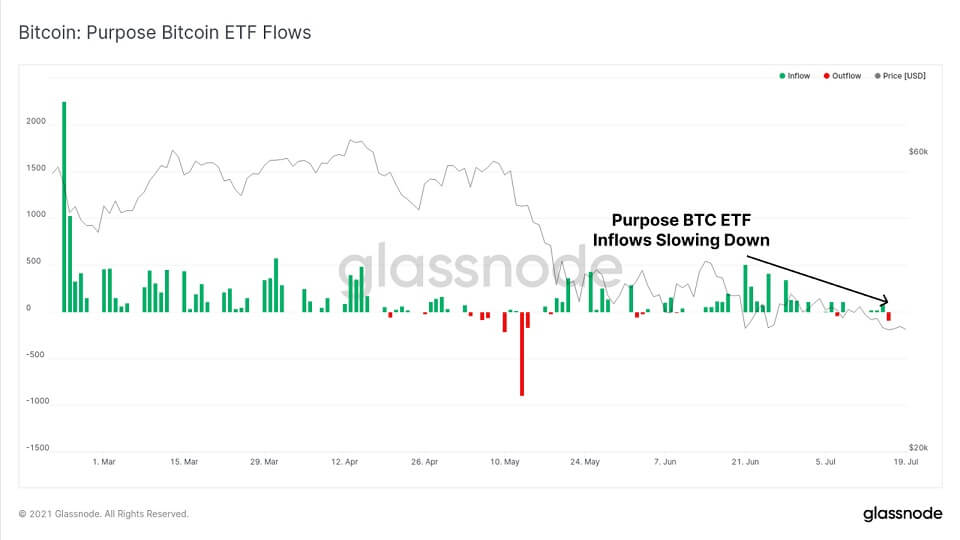 “The Purpose ETF has also seen a slow-down in net inflows this week, after a period of relatively strong demand through May and June. The week closed with the largest net outflow of -90.76 BTC since mid-May. Similar to the GBTC product, this indicates institutional demand remains relatively weak across these regulated products.” 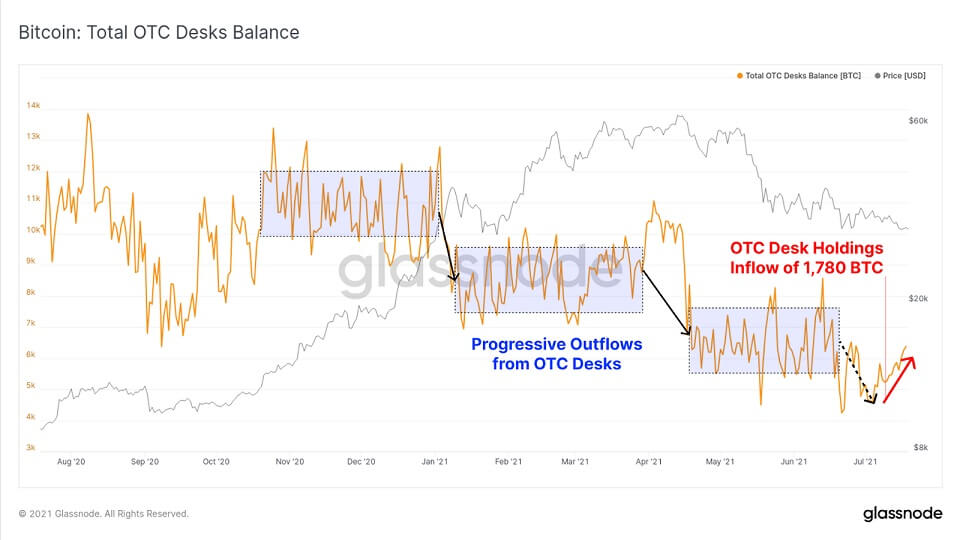 “Last on the institutional demand side, OTC desk holdings have seen a net inflow of around 1,780 BTC over the last two weeks, moving against the structural trend of outflows in place since November 2020. It remains to be seen whether this net inflow is just a short-term impact, or the early signs of a reversal in the balance of supply and demand.” 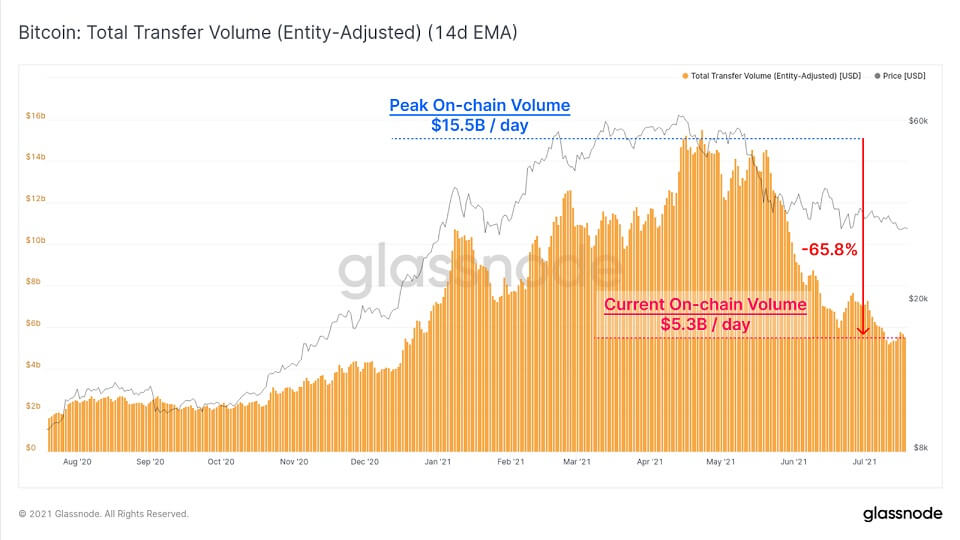 “Entity-adjusted on-chain volume (14-day EMA basis) remains down 65.8% from the highs in April. The Bitcoin network is currently settling $5.3B/day compared to the $15.5B in daily volume settled at the 2021 peak. This demonstrates relatively low demand for value settlement remains in place.” 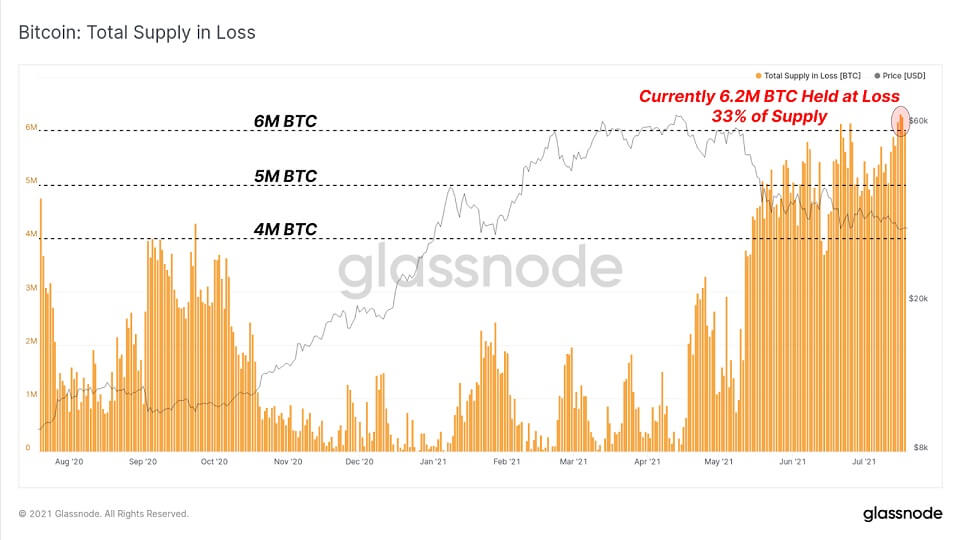 "We can also assess how much of the coin supply remains underwater to gauge how much supply may become additional sell-side pressure. The chart below shows that approximately 6.2M BTC, equivalent to 33% of the circulating supply is currently holding an unrealized loss."

According to a recent press release, the Crazy Horse 3 gentlemen’s club in Las Vegas, Nevada, has started accepting Bitcoin payments through the Lightning Network. The world-renowned strip club claims to be the first major entertainment venue in Las Vegas to accept Lightning payments.

The release said the club has integrated with OpenNode, a Bitcoin payment processor which allows guests to securely purchase “VIP bottle packages” using BTC through the venue’s website.

Crazy Horse 3 publicist Lindsay Feldman said the club was committed to a “modern-day” experience for guests and noted that Bitcoin offered “convenience, first-class hospitality and an added level of anonymity.” She added:

"The club’s partnership with OpenNode allows us to cater to our tech savvy customers’ needs by offering an innovative form of payment that’s both seamless and secure. With the new Allegiant Stadium just feet away from our front door, this crypto power move allows us to give our customers, including global travellers flying in for conventions, concerts and sporting events, more purchasing power."

A break below the $29,000 support will take Bitcoin price to the $27,000 psychological level. During the process, BTC will reverse the parabolic SAR from positive to negative. The upside for BTC is blocked by the $31,500 resistance, 20-day SMA, and the 50-day SMA.