Over the last two days, the Bitcoin price rose by $2,000 to reach $50,300 as of press time. However, the February 22 dip made sure that BTC reversed the parabolic SAR from bullish to bearish. This shows that the current market sentiment is negative.

Looking at the 4-hour Bitcoin price chart, we can see that the MACD is about to reverse from bearish to bullish, which shows that BTC is going to recover even more.

A US Congress subcommittee is currently examining if domestic extremists are using crypto as a source of funds for their activities. The Subcommittee on National Security, International Development, and Monetary Policy is holding a hearing today titled “Dollars Against Democracy: Domestic Terrorist Financing in the Aftermath of Insurrection.”

A committee memorandum stated that “as scrutiny by traditional banks and payment platforms increases, extremists are turning to solicitations of cryptocurrencies.” In the memorandum, two main incidents are cited to imply that crypto may have helped fund the Capitol insurrection.

First, on December 8, a French extremist who committed suicide sent 28.15 BTC (worth $522,000 at the time) to 22 addresses. Some of these 22 addresses belong to known far-right activists and internet personalities. More than $250,000 of the BTC he transferred went to activist Nick Fuentes who was identified as being at the Capitol during the insurrection. However, he has expressly denied entering the building.

Second, the memorandum referenced a live video of the Capitol protest in which the streamer received approximately $222 in cryptocurrency tips. According to the document, the video streaming platform Dlive paid “hundreds of thousands of dollars to extremists since its founding.” The platform was purchased by BitTorrent - owned by the Tron Foundation.

The committee believes that as traditional finance is increasingly regulated, future insurrectionists are likely to turn to non-traditional ways to finance their activities. It added that “some of the arrests related to the Jan. 6 attack,” were successful because of the reporting methods that banks and other regulated financial institutes use.

Crypto investor who goes by the name “The Crypto Monk” said that even Pokemon cards would be better for payment than Bitcoin due to the coin’s ability to trace funds. 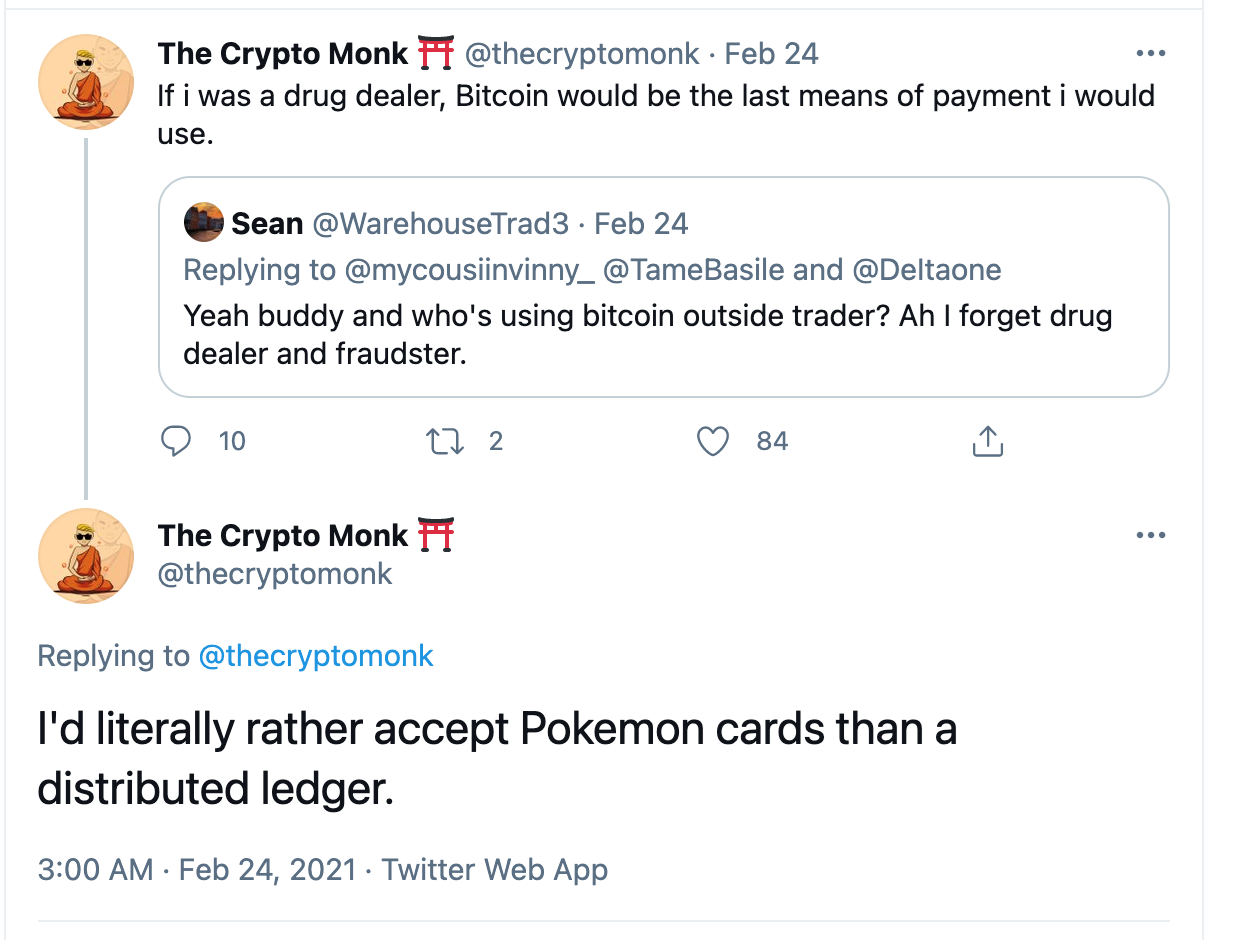 Micheal Saylor, the CEO of MicroStrategy, recently said that Bitcoin’s market value will exceed $100 trillion in the future. He added that the flagship crypto will become a “stabilizing influence” for the global financial system.

Speaking on CNBC’s “Squawk Box,” Saylor said that Bitcoin will surpass the market capitalization of gold.

Then it’s going to subsume negative yielding sovereign debt and other monetary indexes until it grows to $100 trillion. Once it gets to $10 trillion, its volatility will be dramatically less.

He added that as BTC surges to $100 trillion, growth rates and volatility will drop, as the coin will become “a stabilizing influence in the entire financial system of the 21st century.” Saylor’s comments come amid a crypto market correction that saw BTC’s price fall by 20% from a new high of $58,000.

Saylor revealed that apart from MicroStrategy’s notable BTC holdings, he has also invested in the largest cryptocurrency himself. As per the CEO, Bitcoin demand will surge in the next few years, not only from institutions but from retail investors as well.

He added that we can expect to see “a billion people storing their value, in essence, a savings account, on a mobile device within five years and they’re going to want to use something like bitcoin.”

Financial services company Square recently announced that it has acquired additional Bitcoin. In a public statement, the company noted that it “has purchased approximately 3,318 bitcoins at an aggregate purchase price of $170 million.”

Combined with Square’s previous purchase of $50 million in bitcoin, this represents approximately five percent of Square’s total cash, cash equivalents and marketable securities as of December 31, 2020.

In the last few days, Bitcoin has fallen significantly from its new all-time high price. Based on the $170 million that Square paid for about 3,318 BTC, it appears to have paid an average of $51,235 per coin.

Square added that it believes cryptocurrency is an “instrument” of economic empowerment as it provides people with a way to participate in a global monetary system and secure their financial future. It also noted that the recent investment is a part of the company’s ongoing commitment to Bitcoin. Square bought $50 million worth of Bitcoin in 2020, which it announced last fall.