The Bitcoin buyers have encountered a strong resistance barrier at the $24,000 psychological level. Having faced repeated rejections at this level, can we expect BTC to go through a price crash similar to BCH? Let’s take a look.

The premier cryptocurrency is currently oscillating around the $23,000 psychological level. The MACD shows that the bulls are losing their advantage, so we could expect a further price drop soon. If that is indeed the case, the buyers will need to defend the 20-day SMA ($22,670) with everything they have got.

Dan Morehead, the CEO of Pantera Capital, said that a “Bitcoin shortage is driving the recent price action.” He claimed that institutional interest is causing BTC to get purchased quicker than it can be mined. According to Morehead, the price movement that took the flagship coin above $20,000 is entirely different from the one that took the asset to its prior all-time high back in 2017.

Bitcoin hasn’t dipped below $22,000 since December 16. In a recent interview with CNBC, Morehead attributed the price-performance to a “Bitcoin shortage.” PayPal and other major companies are buying Bitcoin faster than miners can create it. In the CEO’s opinion, this has apparently caused the ‘price to squeeze up.’ 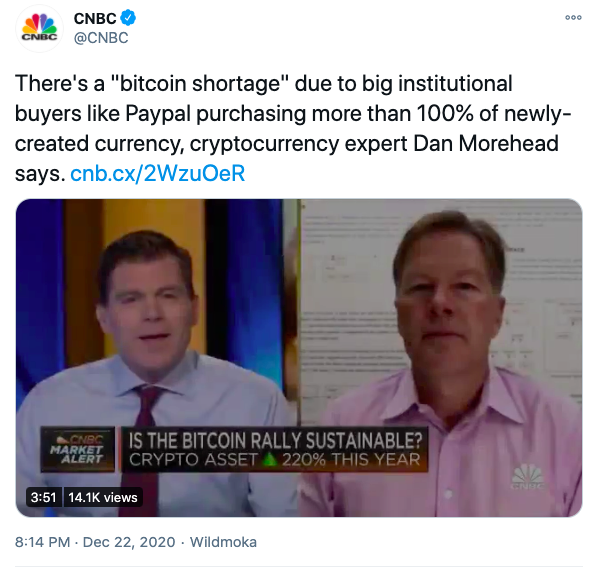 Several large institutions have increased exposure to Bitcoin in recent times. Some enterprises like PayPal and Grayscale are buying Bitcoin to provide exposure to their customers' crypto assets. Other firms like Square and MicroStrategy have added Bitcoin to their treasury reserves. Those doing so frequently cite growing macroeconomic uncertainty as driving the decision.

Morehead also acknowledged the risks associated with the asset class. When asked about recent bearish developments such as the SEC actions against Ripple and the Ledger data breach, he said:

It’s very, very early days for a brand new asset class so there’s going to be volatility on both sides.

However, the Pantera CEO says that the media is less likely to report on the growing numbers of people worldwide that find BTC useful.