Bitcoin Price Analysis: BTC jumps past $23,000, but is it all sunshine and rainbows?

Bitcoin has managed to break past the $23,000 barrier and is trending in levels never seen before. The last few days have been legendary for BTC and, for many investors, this seems like the start to the next BTC market jump. However, is the premier cryptocurrency chewing off more than it can swallow? Let’s take a look.

Bitcoin bulls have remained in control of the market for seven straight days, during which it climbed up from $18,000 to $22,860. The moving average convergence/divergence (MACD) shows that the market momentum is getting increasingly bullish.

The support line that we have drawn in the daily chart is in line with the strong support zone as visualized in IntoTheBlock’s IOMAP (In/Out of the Money Around Price). It seems like investors have used the $20,500 psychological to hop on the BTC bandwagon.

However, this support zone seems strong enough to absorb an immense amount of buying pressure. Looking at the 4-hour chart, it looks like there is short-term resistance at $23,400, which has held the price down.

Billionaire hedge fund manager Alan Howard is backing a new institutional-focused investment firm. The company plans to allocate as much as $1 billion to Bitcoin (BTC) and Ether (ETH) by early next year.

Eric Peters, the CEO of One River Asset Management, has set up the new company to capture institutional interest in the two leading digital assets, as per a Bloomberg report. He noted that he has purchased "more than $600 million" worth Bitcoin and Ether in November.

Howard is playing a number of supporting roles. In addition to investing in One River Digital’s funds, he’s also buying a stake in the business. A company he controls, Elwood Asset Management, is providing One River Digital with trading services, market analysis and technical support.

The report further added that the Northern Trust would serve as the fund's administrator and Coinbase as its initial trade execution and custody partner. Notably, Ruffer LLP is also backing One River. The former is a British investment manager who recently confirmed that it had obtained Bitcoin exposure worth about $700 million.

According to The Block report, a spokesperson for Ruffers said:

Ruffer portfolios aim to preserve capital and deliver good all-weather returns, and they now have an allocation to bitcoin to help us meet that objective.

Bitcoin has successfully moved past the $20,000 threshold recently, marking an important milestone. The price pattern could be a sign of long pent-up demand for the cryptocurrency. 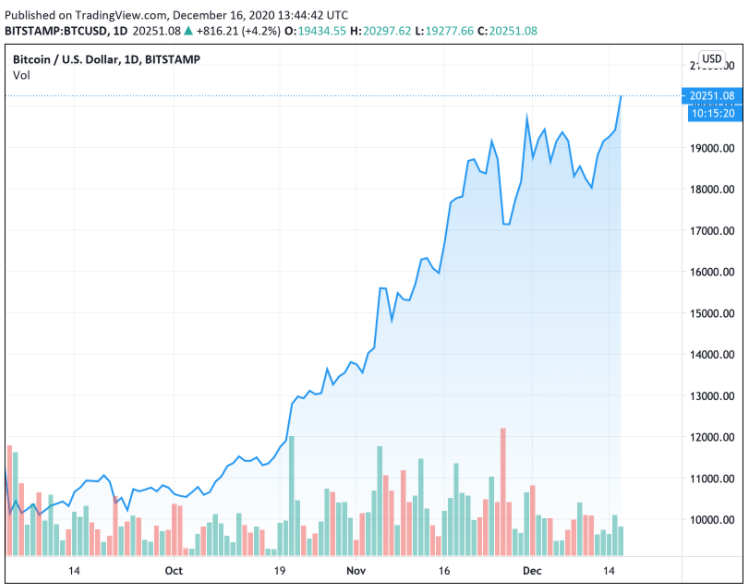 According to CryptoQuant, there was an unusual spike in the number of stablecoin inflow addresses for all exchanges, an indicator of “extreme buying power” on Wednesday.  Ki Young Jun, chief executive of CryptoQuant, told CoinDesk:

Many people were trying to deposit stablecoins to buy BTC.

It is currently unclear as to what caused this surge. Interestingly, the UK based Ruffer Investments confirmed it invested about $744.26 million worth of Bitcoin in November just recently. Some industry analysts are anticipating larger buyers in the coming months.

Looking forward to 2021, we should expect the outsized bids of institutions to have a much greater determining influence on the price of bitcoin and other cryptocurrencies.

Scott Minerd, the chief investment officer at Guggenheim Partners recently said that Bitcoin should be worth way more than its current price. He told Bloomberg TV that his company’s fundamental analysis shows that the coin should ideally be priced at $400,000.

This soaring high price target is based on two aspects, as per Minerd. The digital asset’s scarcity and its relative value to gold as a percentage of gross domestic product.

Bitcoin has a lot of the attributes of gold and at the same time has an unusual value in terms of transactions.

Minerd mentioned that he started allocating to BTC when the leading cryptocurrency was trading around $10,000. He added that investing in Bitcoin “is a little more challenging” now that the coin has crossed the $20,000 mark.

Is this a bit too much at once?

While no one is suggesting that this breakout is a bull trap, the fact remains that a period of correction often follows such a dramatic rise in price. Santiment noted on Twitter that the number of Bitcoin mentions had spiked dramatically over the last few days. 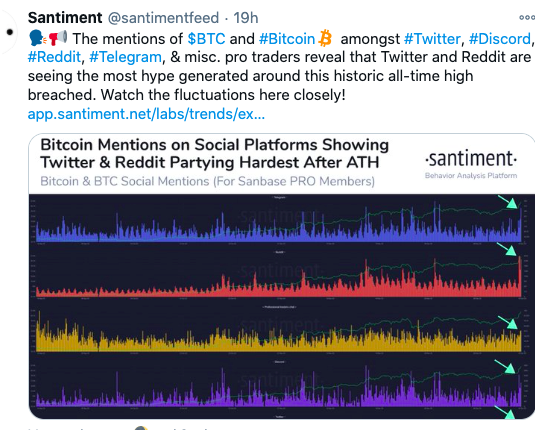 This isn’t particularly a good sign. A high spike in social activity equates to FOMO, wherein a lot of new and inexperienced investors enter the market. The problem with this is that they exit the market in the slightest chance of volatility.

Brian Armstrong, CEO and Co-Founder of Coinbase has also warned investors about this volatility.

"We believe that crypto is a truly game-changing innovation and, at Coinbase, we take a long-term view of the market. While it’s great to see market rallies and see news organizations turn attention to this emerging asset class in a new way, we cannot emphasize enough how important it is to understand that investing in crypto is not without risk."

"I do NOT think that from wherever a meaningful correction begins will be the absolute end of the BTC bull market. I believe BTC is in a multi-year bull market. But vertical blow-offs cannot be sustained. I will take some profits at a long-standing target of 24087."