After crossing the psychological $50,000 mark, the Bitcoin price failed to push further after reaching a high of $50,814, instead of dropping back down to $48,837. BTC has had a few fairly muted sessions where the price has not moved much. After facing resistance at $50,000, it looked like the price would fall back to its support price. However, the buyers successfully flipped the market, and bullish sentiment propped up the price, which looks set to breach $49,000, thanks to the 20-day SMA, which could act as a line of support.

Bitcoin Price Chart Indicates BTC Could Push Past $50,000 Once More.

The Bitcoin price opened the current session at $48,323.67 after falling over 2% during the previous session. Positive sentiment due to the bullish cross allowed buyers to take control of the session, and it opened in the green, with the price currently closing in at $50,000 once again. At present, BTC is around $49,500. With overall market sentiment bullish, it was already anticipated that BTC could push past $50,000 again, and it potentially could in the next couple of trading sessions. 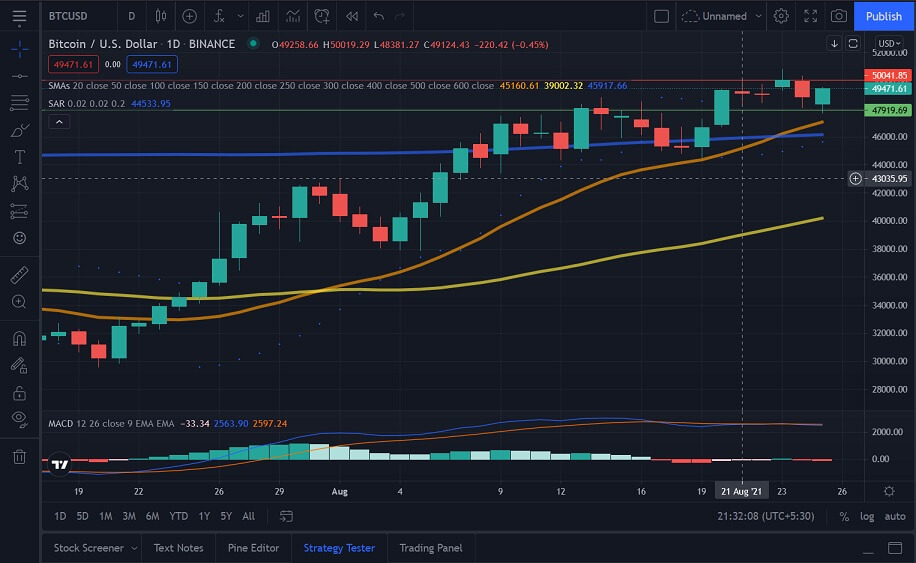 Looking at the 1-day chart, we can see that BTC is bullish with buyers in control. The bullish cross is one factor that could push BTC’s price back up again, with the 20-day SMA acting as potential support. Bulls stemmed BTC’s fall and pushed back, and with the Parabolic SAR also positive, we could see BTC breach $50,000. The MACD shows a bit of bearish sentiment, however with the overall bullish mood, we could see the MACD flip to a positive sentiment if BTC pushes past $49,500.

In the Bitcoin 4-hour chart, we see that the 50-bar SMA acts as support at around $47,900. This support allowed buyers to push the price up to 49,450, but with the 20-bar SMA acting as resistance, BTC faced pushback and is trading in the red during the current session. If BTC is unable to break the resistance, then we could see a pullback to where the 50-bar SMA is offering support. The bearish Parabolic SAR indicates negative sentiment, and it could be likely that we see the price pushed back from resistance. 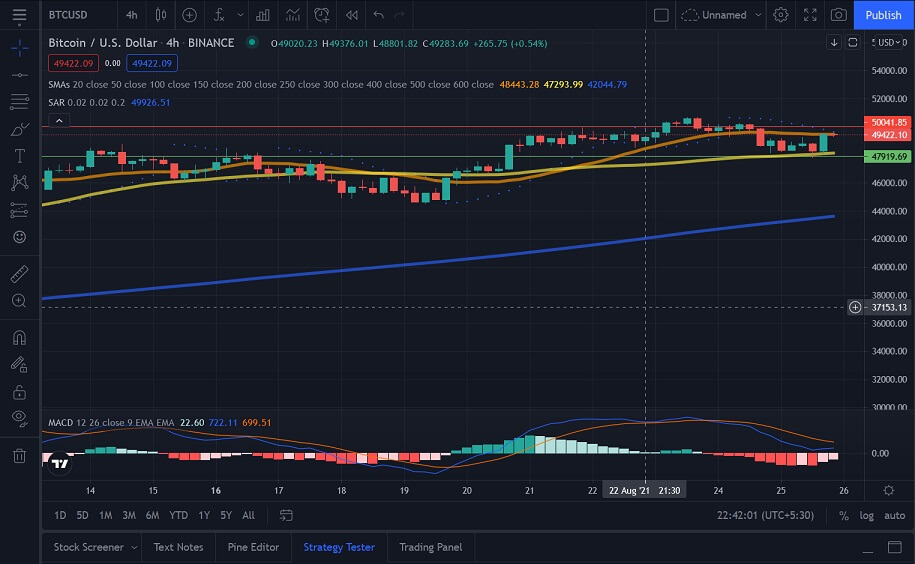 Data from analytics provider CryptoQuant says that Bitcoin hashrate made a remarkable recovery since it crashed earlier this year, following China’s crypto mining clampdown. It has now topped 150 Exahashes, or one quintillion hashes, per second. As of August 24, the hashrate was 152EH/s which tripled since it bottomed out this year on June 28 at 52 EH/s.

The recovery of the BTC hashrate implies that the network is even more secure and resistant to attacks now. According to Bitinfocharts, the average Bitcoin hashrate hit an all-time high of 197.6 EH/s on May 13. If the trend continues, it could hit a new all-time high in the next couple of months. 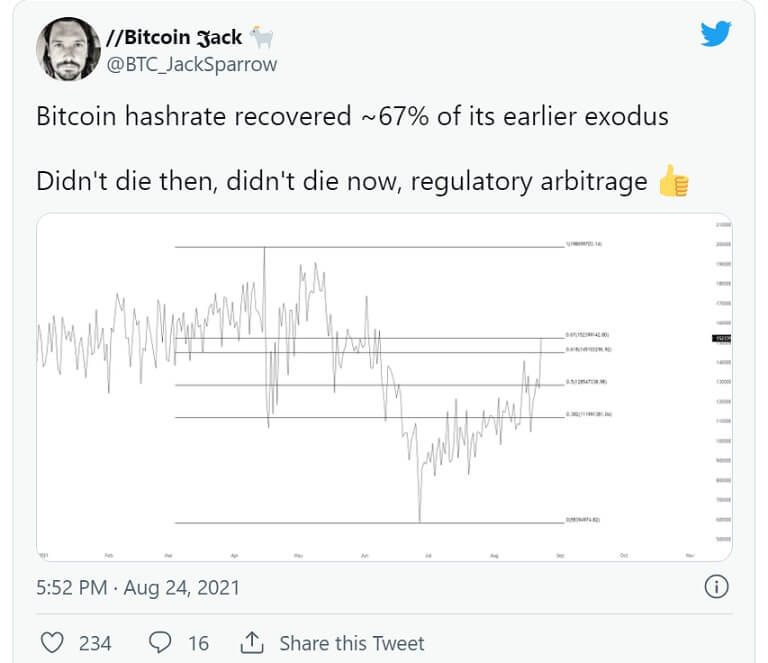 The recovery of hash rate indicates that the miner migration is almost complete. This has also increased difficulty as the next one is due any time now. It means higher computation costs for miners as more of the formerly China-based operations come back online to compete for blocks. However, miners operating in countries like the United States were able to rake in bigger profits since the migrating operations were offline in June and July, lowering the difficulty.

As per reports from Cointelegraph, the U.S. mining firm Riot Blockchain announced record revenue for BTC mining during the second quarter.

The Bitcoin Price 1-day chart shows that with the 20-day SMA acting as support, we could see BTC push past $50,000 once again and potentially test the resistance at $50,041. If BTC does push past resistance, we could see the price settle at around $50,500.