The price of Bitcoin expected to reach $50,000 before facing correction

Monday turned out to be a memorable day for Bitcoin price. The Elon Musk-led Tesla announced in their SEC filing that they had purchased $1.5 billion worth of Bitcoin. As soon as the news came out, the BTC price immediately reacted and reached a new all-time high of $47,131.35.

Tesla Purchases $1.5B Worth BTC

Tesla Inc, the Elon Musk-led electric vehicle company, recently purchased Bitcoin worth $1.5 billion, according to its annual report filed with the US Securities and Exchange Commission (SEC). Carl Quintanilla from CNBC shared an excerpt from the report on Twitter that has gotten the attention of the crypto community.

“TESLA 10-K: ".. we invested an aggregate $1.50 billion in bitcoin under this policy and may acquire and hold digital assets from time to time or long-term. Moreover, we expect to begin accepting bitcoin as a form of payment for our products in the near future ..

Soon after the news broke out, Bitcoin soared past the $40,000 mark again. Tesla’s CEO Elon Musk had added the hashtag #bitcoin to his Twitter bio a few days back. Just this was enough to push the coin’s price by 20%. Musk admitted that he is late to the Bitcoin party and should have bought BTC “eight years ago” during a clubhouse chat.

Another important factor to consider is MicoStrategy’s massive Bitcoin interest and investment in recent times. With over $1 billion investment in Bitcoin, MicroStrategy has been making headlines since last year. Just a few days back, the company hosted a major conference introducing Bitcoin and its use cases to institutions from all around the globe.

Notably, MicroStrategy’s CEO Micheal Saylor had a conversation with Elon Musk in December 2020 about Bitcoin. Musk had tweeted a provocative meme about BTC to which Saylor responded saying:

If you want to do your shareholders a $100 billion favour, convert the TSLA balance sheet from USD to BTC. Other firms on the S&P 500 would follow your lead and in time it would grow to become a $1 trillion favour.

Musk then asked Saylor if billion-dollar transactions are possible with Bitcoin. To this Saylor said:

Yes. I have purchased over $1.3 billion in #BTC in past months & would be happy to share my playbook with you offline - from one rocket scientist to another.

CoinShares CSO: Institutions Now Have To Allocate To Bitcoin

Meltem Demirors, the chief strategy officer at CoinShares, has warned that it is currently risky for institutional investors not to have Bitcoin in their portfolio. In an interview with CNBC, Demirors addressed concerns that Bitcoin’s bullishness has a time limit. Eventually, regulators like the US Treasury Secretary Janet Yellen will crackdown on the crypto space.

The executive noted a misconception that Bitcoin is unregulated, which he thinks is “certainly false.” He added that CoinShares spends a lot of time on compliance. According to Demirors, allocating funds to Bitcoin was a risk for investors in 2020. However, in 2021, he believes that “it is a risk to not allocate to Bitcoin.”

Commenting on the institutional adoption of Bitcoin, Demirors spoke about MicroStrategy, which has more than doubled its treasury reserves due to its Bitcoin allocation. He also mentioned the recent Bitcoin conference event hosted by MicroStrategy with more than a thousand corporate treasurers in attendance. In Demirors’ opinion, nation-states are now starting to seriously look at what role Bitcoin could play in their economies' future.

Demirors added that this time, institutional interest is leading the Bitcoin bull run while retail traders are more focused on smaller crypto assets and meme coins.

A lot of the interest in Bitcoin is coming from institutions. When we look at trends on the trading side, from the structured product side where we operate and manage $4 billion in assets for our clients, a lot of the inflows are coming from institutions who are allocating through publicly listed exchange-traded products or funds. There is retail participation, but it’s nowhere near what we saw in 2017.

Where we are seeing the retail participation is in things like Dogecoin (DOGE) and other sorts of smaller market cap cryptocurrencies that lend themselves more to ‘memefication’ and what we call ‘meme coins’ or ‘meme stocks,’ if you look at GameStop and AMC. Really what’s driving Bitcoin in my view is the fundamental shift in sentiment.

Ari Paul, the CIO of BlockTower recently said that he believes Bitcoin could potentially achieve over 10x gains in the next couple of years. Paul took to Twitter to note that the bull market may last until the end of 2022 with Bitcoin poised to grow between 153% and 915% from its present price.

In a Real Vision interview with Bitcoin bull Raoul Pal, Paul explained that while he’s long-term bullish on Bitcoin, he believes that altcoins will outperform BTC in the near future.

So if this bull market resembles those that came before it, and I think it likely will, the last third of the bull run, all coins, in general, are likely to outperform Bitcoin. And that’s happened every time in the past. It tends to happen in traditional markets, where you get– basically, lower-quality small caps outperform quality. And the reason is people’s risk tolerance grows.

Bitcoin Price Is Consolidating Above $45,000

If this correction does happen, the support barrier at $38,500 - wherein 708,500 addresses had previously purchased 390,000 BTC tokens - looks robust enough to absorb a lot of selling pressure.

The 4-hour Bitcoin price chart shows two positive signs – the parabolic SAR has reversed from bearish to bullish, while the MACD indicates increasing bullish momentum. All this tells us that BTC may creep into the $50,000 barrier before facing this correction. 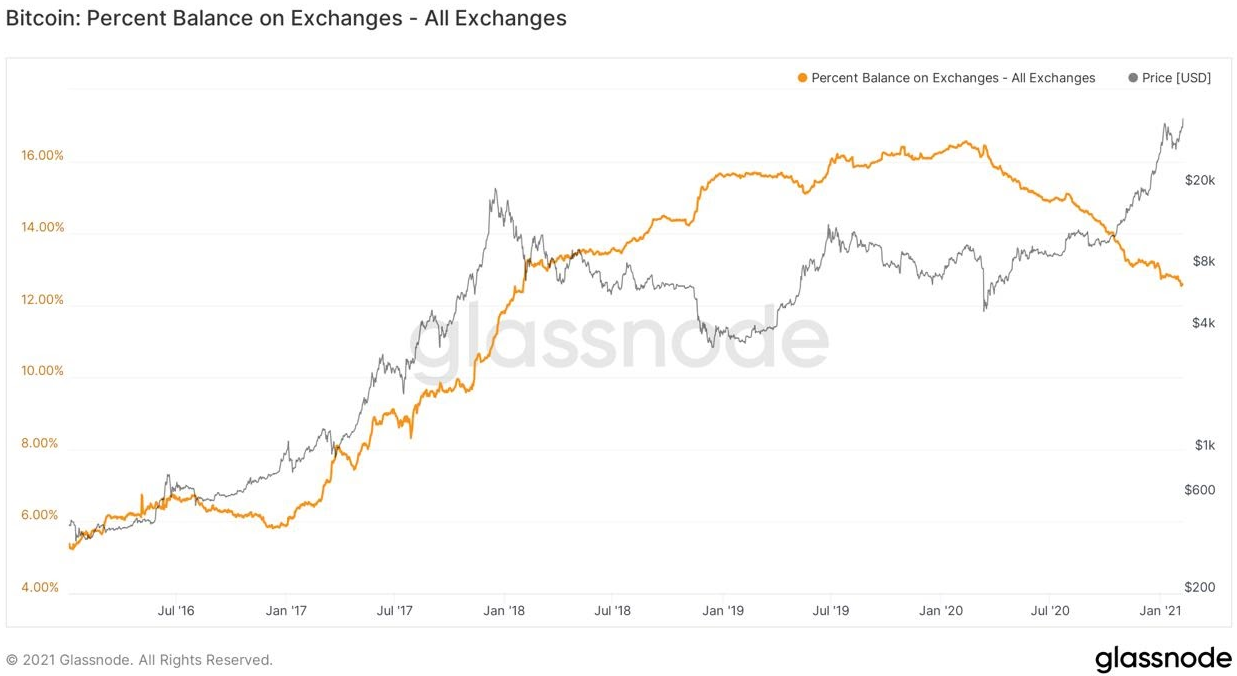 The supply of  BTC on exchanges has fallen to levels last seen in Jan 2018, right at the peak. Since then, another 1.8 million BTC have come into circulation, all of which have gone to strong hands accumulating. This is a positive sign for Bitcoin price as it shows that people are prioritizing holding over selling. 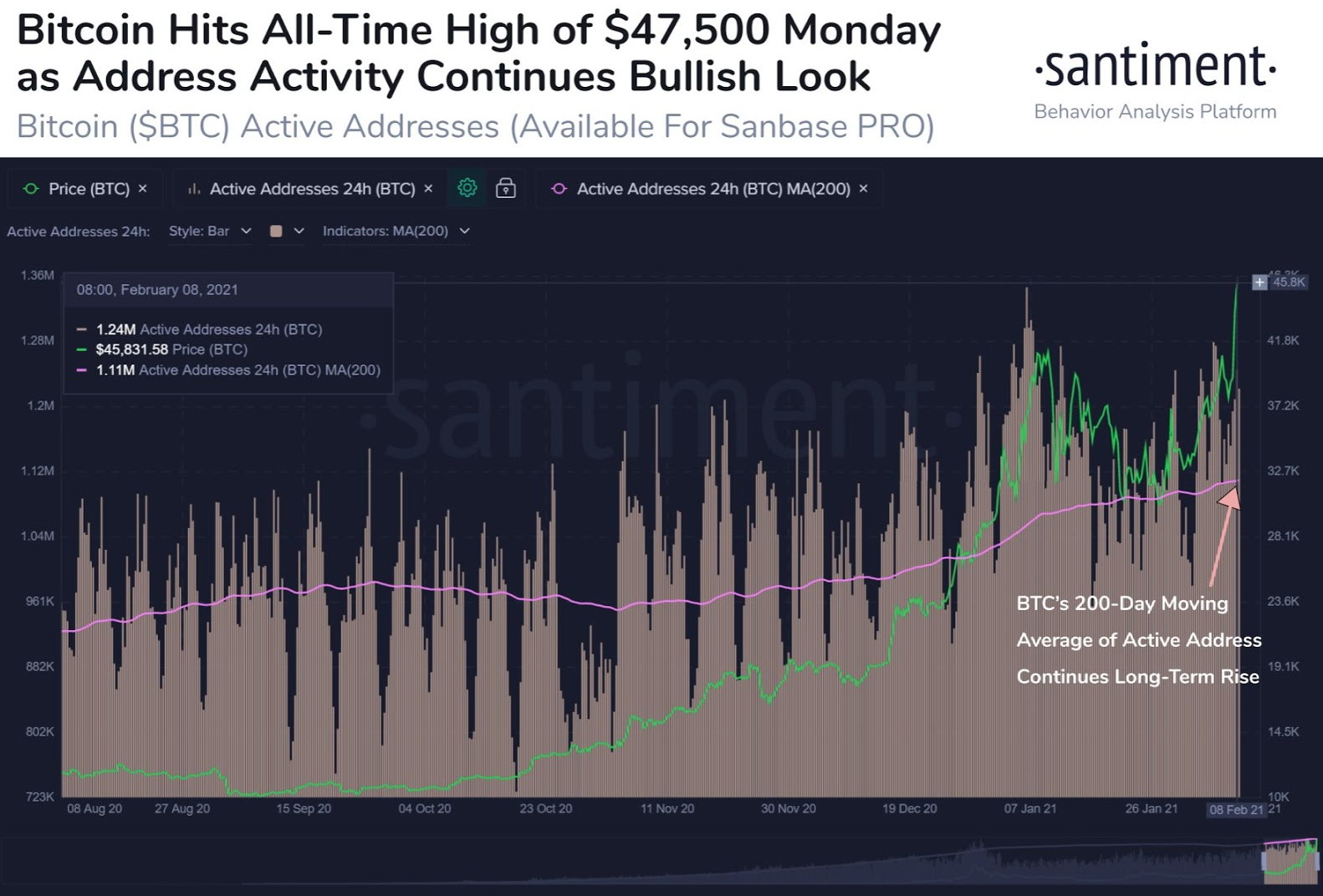 In the chart above, we see a consistent rise in the 200-day moving average for active addresses (unique addresses interacting on $BTC's network). This shows us that the Bitcoin network is getting steadily stronger.

We expect the Bitcoin price to reach $50,000 before facing correction. The technicals look pretty strong.