Bitcoin Price Analysis: BTC Remains In The Red Over The Weekend As Price Registers Marginal Drop

The Bitcoin price started the previous weekend on a bullish note, as it registered a marginal increase on Saturday. Sunday saw BTC push up significantly, as the price rose by over 3%, pushing above the 20-day SMA and settling at $63,683. The week started with the bullish sentiment persisting, as BTC rose by over 6% on Monday, settling at $67,541. However, after reaching this level, the price fell back in the red, registering a drop of 0.62% on Tuesday. Wednesday saw the price drop further, as sellers pushed the price down by over 3%, with BTC settling at $65,080. 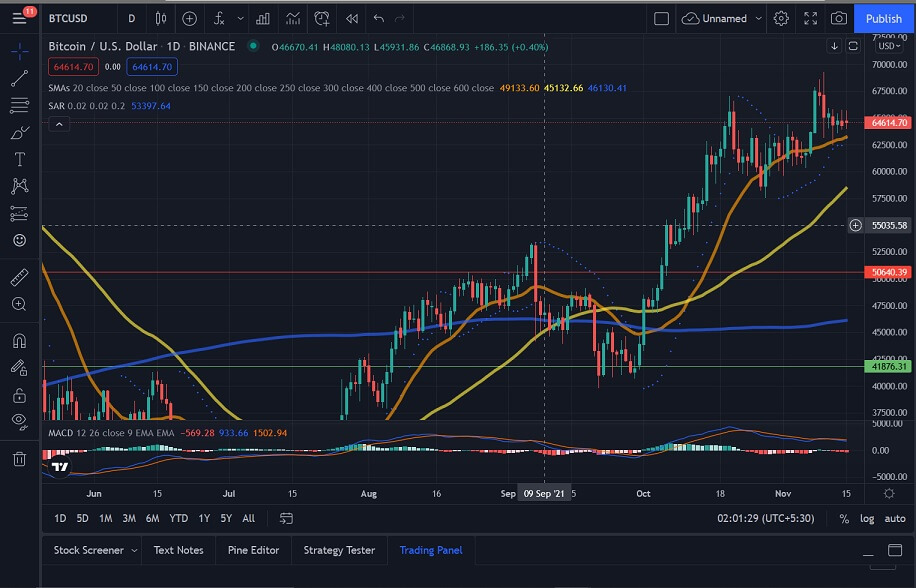 After dropping to $65,080 on Wednesday, The Bitcoin price posted a marginal recovery on Thursday. However, BTC was back in the red on Friday, as it fell by 1.55% and settled at $64,396. The weekend started with a marginal recovery, as BTC pushed up by 0.54% on Saturday but fell back on Sunday, dropping to $64,302. The current session sees BTC still in the red, and with the MACD currently bearish, we could see the price drop during the current session. If the price drops further, we could see the Parabolic SAR flip to bearish as well.

The 4-hour Bitcoin price chart shows that BTC had pushed above the 20 and 50-bar SMAs on the 7th. The price surged to $68,503 on the 9th but could not stay at this level and dropped to $66,580. BTC made a strong recovery from this level but dropped drastically after reaching $68,302, with the price slipping below the 20-bar SMA and settling at $65,122. The price pushed up marginally from this level, rising to $65,535 before slipping below the 50-bar SMA and settling at $63,381. BTC pushed above the 50-bar SMA, rising to$65,031, but with the 20-bar SMA acting as resistance, the price dropped to its current level of $64,480. We can see that the Parabolic SAR is bearish while the MACD is bullish. However, if the price fails to recover and continues to drop, we could see the MACD flip to bearish. 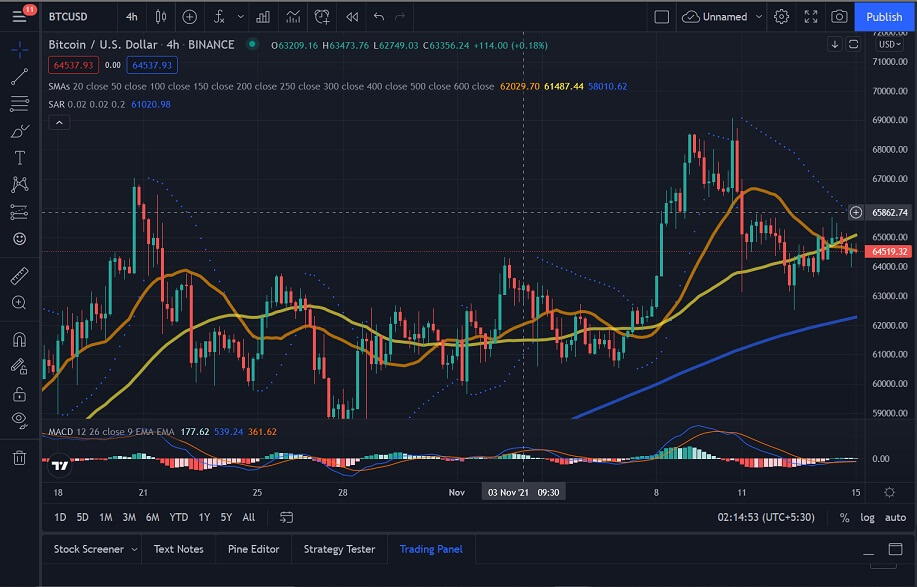 Asian Cryptocurrency Holdings To Get Insurance From HK Firm

Third-party insurance covers physical damage to wallets caused by natural occurrences, cybersecurity risks such as outside hacking or malware attacks, and employee intentional or fraudulent acts.

"With over 1,800 licensed asset managers, Hong Kong is home to over US $3 trillion in assets under management. We want to help asset managers enter this market in ways that enable them to also fulfill their fiduciary duties to their end investors."

The company said it is creating more technological solutions to assist crypto market participants in avoiding risks. In addition to its in-house cybersecurity platform Cymetrics, the tools will help clients assess their cyber risk and manage it.

Miami will soon start giving Bitcoin to its citizens, its mayor Francis Suarez announced on a CoinDesk TV interview recently. When asked if he envisioned Bitcoin being used as cash, Suarez responded positively.

"I do see very quickly a world where the Satoshi system is what is used to make payments; we need to make that leap. We need people to understand that bitcoin is increasing in value and yes, we want you holding bitcoin. But at the same time we need to increase the utility of Bitcoin which increases the value even more and also creates more functionality so people can be in a better currency, frankly."

Suarez has been strongly pushing an agenda to create a comprehensive Bitcoin ecosystem in Miami and announced earlier he would take his entire salary in Bitcoin.

The mayor also wants to enable city employees to get paid in BTC and allow residents to pay for city fees and taxes in the decentralized currency. The mayor later added that the city plans to launch a digital wallet in partnership with bitcoin exchanges to airdrop bitcoin earned through staking MiamiCoin in the Stacks protocol to its residents.

Suarez ultimately hopes to enable citizens to use bitcoin and MiamiCoin as they choose, either to HODL or to spend in regular merchants on the street.

"MiamiCoin is based on the Stacks protocol that stacks on the Bitcoin blockchain, so there's all kinds of nexuses and involvement between one and the other."

Looking at the Bitcoin price, we can see that BTC has been quite bearish over the weekend. If the current sentiment persists, then we could see BTC drop to $64,000.