Since May 9, the Bitcoin price has crashed from $59,000 to $40,000 – losing almost $20,000 in the process. The main cause of this recent dump, along with Tesla kicking out Bitcoin payments, is the fact that Chinese government has officially banned financial institutions from servicing businesses that deal with cryptocurrency payments. Three industry bodies said in a joint statement:

"Recently, crypto currency prices have skyrocketed and plummeted, and speculative trading of cryptocurrency has rebounded, seriously infringing on the safety of people's property and disrupting the normal economic and financial order."

The Bitcoin Price Sits On Top Of 200-day SMA

According to the Kostas Flow chart, “Total Exchange outflows at highest level since 3/2020. Someone is buying the dip.”

Plus, according to “Dilution-proof” a well-known crypto analyst:

Elon Musk recently denied rumors that Tesla has sold its remaining Bitcoin holdings. The comments came after his second attack on Bitcoin, where he called out the dominance of Chinese mining pools in a now-deleted tweet.

Last week, Musk announced his firm would no longer accept Bitcoin as payment for its electric vehicles. The reason he gave was a growing concern about the use of highly polluting coal by miners. This coincided with a mass sell-off in which Bitcoin's prices were impacted, closing the day down 13% to $49.5k.

Musk took to Twitter again to say that Bitcoin is highly centralized due to the small number of mining pools that control the network. He noted that coal is a significant power source for miners, despite counter claims that the network runs mostly on renewable sources.

A single coal mine in Xinjiang flooded, almost killing miners, and Bitcoin hash rate dropped 35%. Sound decentralized to you?

Musk's tweet received many responses. Analyst "@CryptoWhale" suggested that Tesla will sell their Bitcoin holdings. They added that if that happened, Bitcoiners would only have themselves to blame. He was referring to the outpouring of hate directed at Musk. 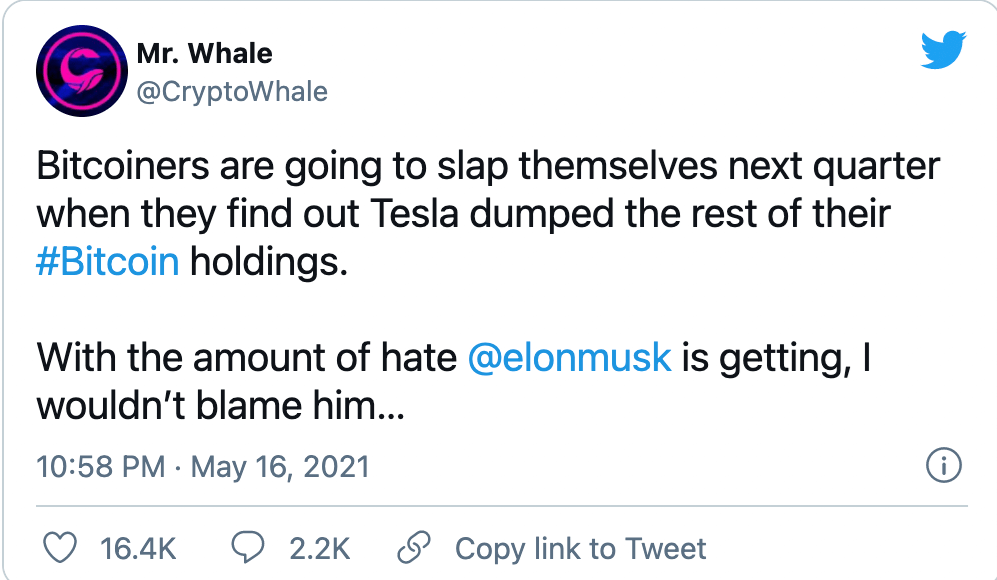 Musk replied to the tweet with a response of “indeed.” Some publications interpreted this as confirmation that Musk had already dumped his Bitcoin holdings. But he later clarified that Tesla has not dumped its BTC holdings.

To clarify speculation, Tesla has not sold any Bitcoin.

The Bitcoin price could drop below the $40,000 psychological line and the 200-day SMA, if the current bearish market sentiment continues. If this does happen, all eyes will be on the $35,500 support barrier.