Bitcoin buyers managed to rally hard after two straight bearish days as the price bounced up from $18,320 to $18,600. However, how far can the price really go? Is this the start of a new bullish rally or is it nothing more than a false positive? Let’s take a closer look.

BTC trapped between a rock and a hard place

After repeatedly failing to break past the $19,500 resistance barrier, the sellers managed to take control and push the price down from $19,400 to $18,300 over the last two days. However, this downtrend has been paused for now by the 20-day exponential moving average (EMA). The 20-day EMA had previously provided support for the bulls on 28th November.

However, this bullish elation was a bit short-lived as the price has failed to cross above the 20-day SMA. Repeated rejections at the 20-day SMA could trigger a break below the 20-day EMA and down to the $17,000 support wall. The weekly chart also shows us that the price correction is far from over.

The weekly chart had already flashed the sell signal in the form of a green-nine candlestick in the TD indicator a couple of sessions back. Following rejection at the $19,500 resistance line, the price has started to drop. Looking at the price history, healthy support lies at $16,000. A further break could take the premier cryptocurrency down to the 20-bar SMA ($13,300). The relative strength index (RSI) is still trending in the overbought zone, which hints at further price correction.

Sold off BTC will probably end up with institutional investors

This recent drop in BTC's price is probably the result of retail traders taking profits at levels between $18k and $20k.

According to Glassnode, 75% of long term BTC holders were in a state of profit when the coin was trading above $19k. The company noted that some of these people could have decided to offload a part of their holdings at these levels in a bid to protect their gains.

Analyst PlanB (@100trillionUSD), however, said that a part of the Bitcoin being sold now is likely to end up in the custody of institutional investors like PayPal, Grayscale, Square, and MicroStrategy. PlanB also warned their followers that once the institutions scooped up this BTC, they will lock it up in cold storage forever. 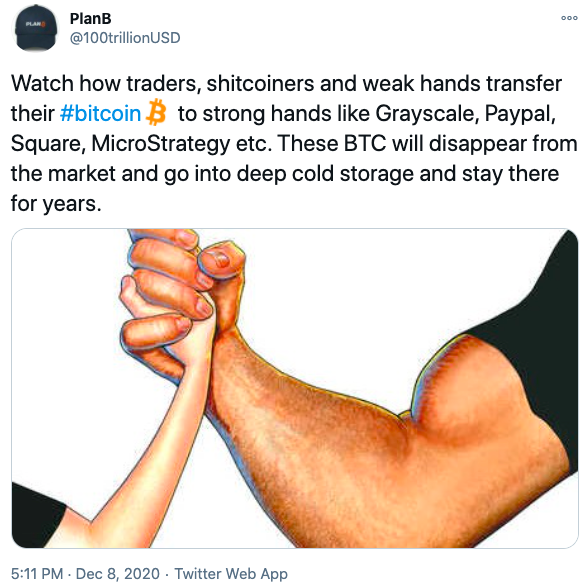 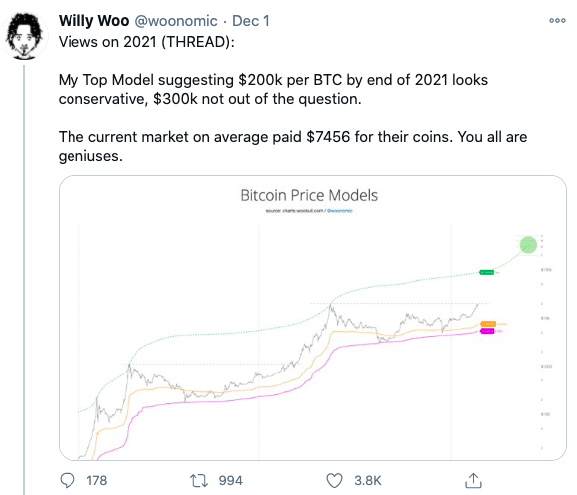 Woo also points out that the dollar gain in market cap for every dollar invested has increased significantly, which is a positive sign. 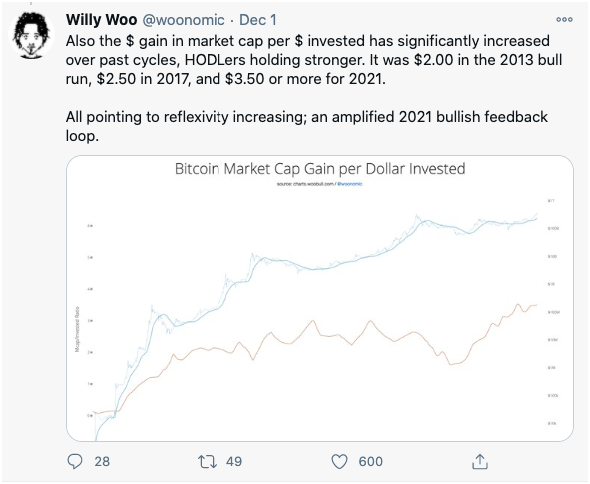 As of now, the most important level to watch out for is the 20-day SMA ($18,600). If the price fails to break past this level, then a drop to the $17,000 support wall is expected. However, if it does manage to break through the 20-day SMA, then it will be interesting to see if the price breaks past the $19,500 resistance barrier.