The Bitcoin price jumped from $51,200, on March 26, to $59,050 – gaining almost $8,000 in the overall valuation. During the upward surge, BTC managed to flip the 20-day SMA from resistance to support. Let’s take a closer look with technical analysis.

Bitcoin Price Is Moving Horizontally Below $60,000

Over the last three days, the Bitcoin price is trending horizontally around $59,000. Plus, BTC has also flashed two more bullish signals in this timeframe:

In April 2013, Bitcoin closed at roughly $140 after posting six green monthly candles. While the asset retraced to less than $100 over the next two months, Bitcoin went on to surge 700% over the following six months, hitting $1,000 for the first time. 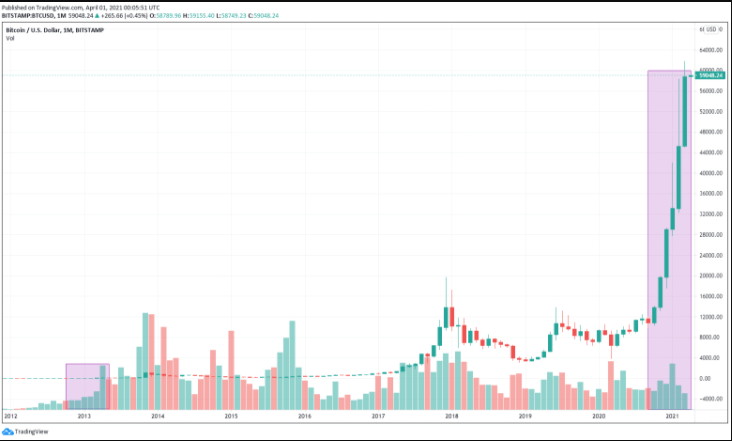 Bitcoin posted a similar pattern in the lead-up to its parabolic bull run in 2017. The flagship crypto posted five consecutive green monthly candles heading into September. While September saw BTC display range-bound consolidation, it skyrocketed into new all-time highs in October. Bitcoin rallied from $5,000 to almost $20,000 by the end of the year.

According to Bloomberg strategist Mike McGlone, Bitcoin could be trading for more than $400,000 by 2022 if BTC follows these trends. McGlone recently claimed that Bitcoin is "well on its way to becoming a global digital reserve asset."

Market analyst Peter Brandt predicted that BTC could gain an additional 250% to break above $200,000. He said:

I think we're in that midpoint pause where in 2017 Bitcoin swirled around for a month or two before we saw the final move up.

However, past trends do not always guarantee future performance. Despite Bitcoin posting five green monthly candles in a row during late 2015, BTC crash by 20% in early 2016 before producing several months of tightening consolidation.

In a recent Forbes interview, US SEC Commissioner Hester Peirce shared her views on the crypto ecosystem. Peirce, popularly called a “Crypto Mom,” answered many crypto-related questions that the community wanted to know.

When asked about the possibility of a Bitcoin exchange-traded fund (ETF), Peirce acknowledged that the US should have approved a Bitcoin ETF a long time ago. She added that the standards set for BTC ETF proposals could have been too high.

My view has been that we’re overdue on approving one of these things. I also think we’ve dug ourselves into a bit of a difficult hole by setting standards for approval that are difficult to figure out how to satisfy. So I really don’t know where we’re going to go.

The commissioner reminded people that the price of Bitcoin does not affect the decision-making process. According to a few reports, the SEC acknowledged VanEck’s Bitcoin ETF, which is now awaiting a final verdict in April.

BlackRock Has Been Stealthily Trading Bitcoin

A recent SEC filing has revealed that the BlackRock Global Allocation Fund held 37 BTC futures contracts from the Chicago Mercantile Exchange worth roughly $360,458. The amount represented 0.0014% of the fund's overall assets. The contracts expired on March 26.

With nearly $9 trillion in assets under management (AUM), BlackRock is one of the largest investment management firms. In 2018, BlackRock CEO Larry Fink said that the firm's clients weren't interested in crypto exposure. He had told Bloomberg:

Right now I can tell you, worldwide, I have not from one client who said “I need to be in this.”

Institutional interest in Bitcoin has been surging in recent times. While Fidelity recently filed paperwork for a Bitcoin ETF, BNY Mellon commented in February that it would add Bitcoin custody services. JPMorgan Chase is creating a cryptocurrency basket so investors can purchase shares in firms exposed to Bitcoin.

The Bitcoin price is going to keep trending along the $59,000 line.