Bitcoin price has been trending horizontally for the last five days above the $32,000-mark. Despite these uninspiring price movements, the on-chain analytics of BTC remains very bullish. Let’s take a closer look with technical analysis.

As per IntoTheBlock’s IOMAP, the $33,000 resistance barrier is extremely strong. Previously, at this level, 708,000 addresses had purchased 396,600 BTC tokens. This zone is strong enough to absorb a considerable amount of buying pressure. Even if the price manages to break above this, there is another strong resistance at the 20-day SMA ($35,000).

Glassnode, a crypto data aggregator, has a helpful metric called adjusted Spent Output Profit Ratio or aSOPR. This metric represents the profit-ratio of coins based on the price of Bitcoin when they were last moved on-chain. 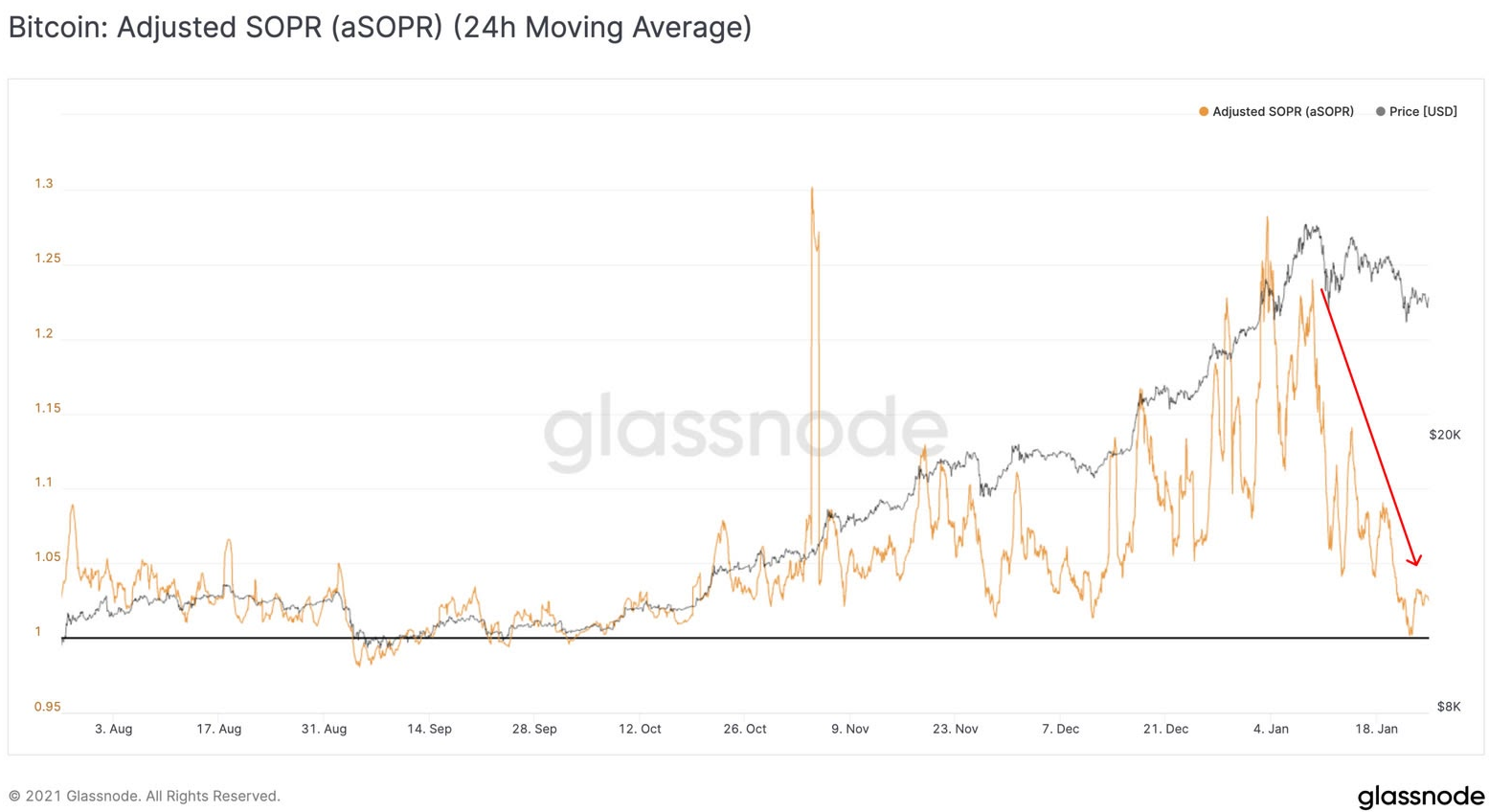 The metric suggests that the price correction may be coming to an end since for the SOPR to go any lower, investors will have to sell at a loss, which is highly unlikely.

Santiment, a behavior analysis platform, tells us that Bitcoin's address activity's long-term trend continues climbing. Both the 50-day and 200-day moving average for addresses interacting on BTC's network continues to show a steady climb. This is one of the leading indicators that show that the Bitcoin price is most likely growing to grow. 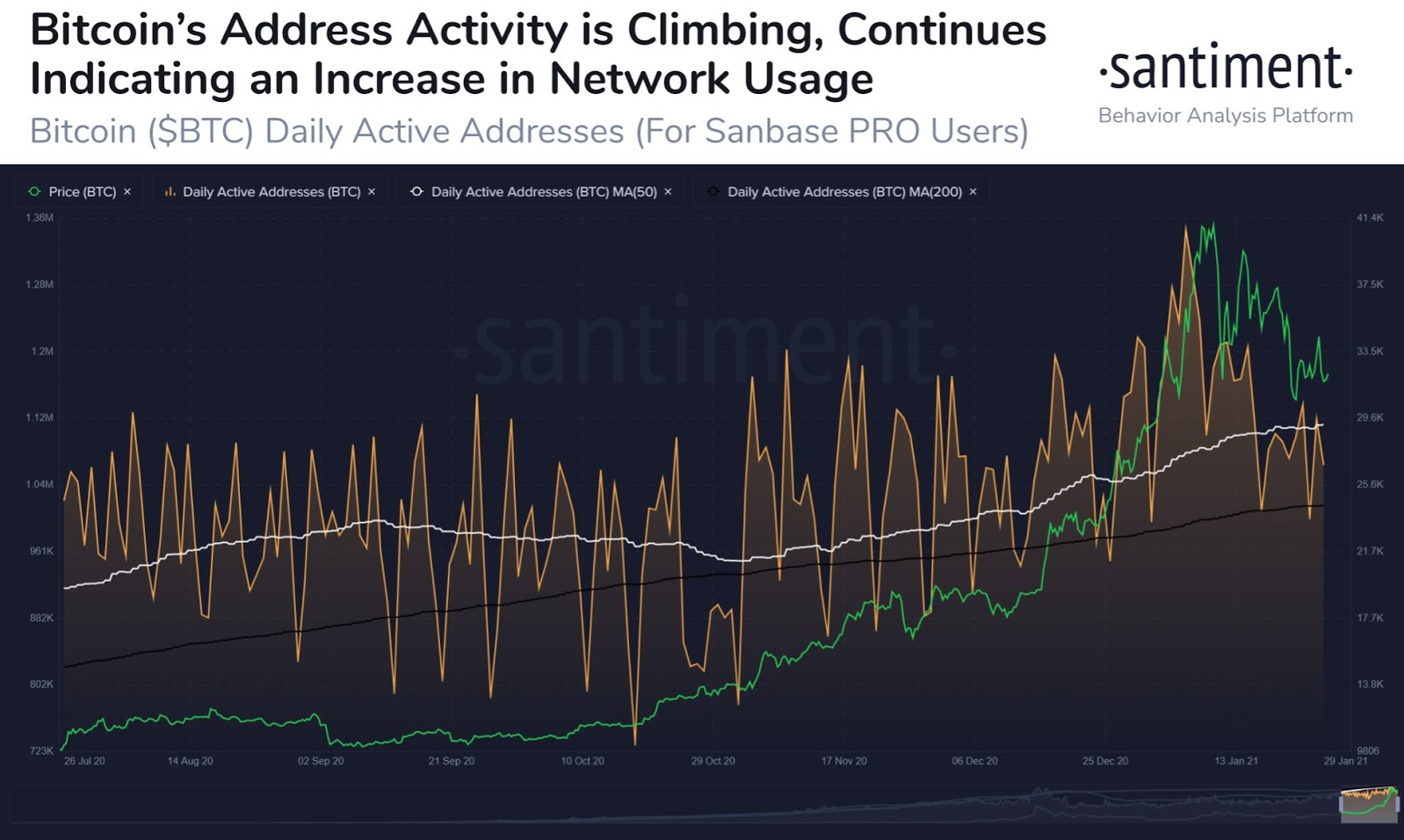 Speaking of Santiment, there is another interesting metric that tells us that despite the recent drop in Bitcoin price, the number of unique $BTC moving between addresses remains very bullish. As Santiment notes:

“Our NVT Token Circulation model indicates that a bullish divergence remains clear for a 4th straight month at these price levels.”

Anthony Scaramucci: Bitcoin Is “As Safe As bonds And Gold”

Anthony Scaramucci, the co-founder of SkyBridge Capital, spoke about Bitcoin in a recent opinion piece. Scaramucci made headlines earlier this month when his company unveiled its Bitcoin Fund LP, which holds over $310 million worth of BTC. Of the $310 million, $25 million is from the company’s own holdings.

Investors are scooping up Bitcoin, which, because of its very nature, is impervious to inflation. By the law of supply and demand, that makes Bitcoin a limited—and in-demand—asset.

The millionaire added that Bitcoin’s rapid growth caused governments and regulatory bodies to notice where the digital asset was ultimately heading towards. According to him, they are now paying attention to the asset from both a regulatory side and a protectionary side (reducing illicit crypto activities).

Scaramucci noted the US Office of Comptroller of Currency (OCC) has now authorized banks and custodians to provide crypto services, a move unthought-of four years ago. This news, according to him, eliminated several trust issues pertaining to the crypto market.

Until recently, as an investment, Bitcoin has had unique and pronounced risks, but that’s changing, with new rules and regulations that have spurred wider institutional adoption.

He further said that financial institutions like Fidelity’s recent venture into the Bitcoin space has made investing (for retail and institutional investors) “as safe as owning bonds and commodities like gold.” Concerning Bitcoin’s volatility, Scaramucci attributed it to the asset class's newness and lack of regulation.

Uncertainties surrounding Tether (USDT) have worried many market participants in recent times. However, Micheal Saylor, the CEO of MicroStrategy, maintains his strong belief in Bitcoin. In a recent interview, he said that Tether was “totally irrelevant” because of the way corporate Bitcoin investments work. To clarify, the uncertainties are based on the premise that USDT is an effective on-ramp for inflows into BTC.

I have talked to hundred-billion-dollar entities. I know at least ten of them that have bought at least 500 million or more bitcoin. They all wired cash into regulated exchanges. They buy the bitcoin, then it goes into cold storage.

On the other hand, many believe that shutting down Tether may have disastrous effects on the entire cryptocurrency market. With a market cap of $25 billion, it has become the biggest stablecoin. This could be why many cryptocurrency investors see it as a lifeline for the survival of crypto exchanges.

Saylor has said that he sent the Bitcoin he purchased through cash into cold storage. He added that Tether is insignificant in the grand scheme of things, adding that “nobody is using Tether.” According to him, the asset is merely a “successful FUD” and will not affect Bitcoin if taken down.

He noted that stablecoins exist mainly for offshore exchanges to carry out settlement. In his opinion, corporate investors purchase the flagship crypto with actual dollars they already have.