Bitcoin Price Analysis: Bulls Stalled In Their Path To $56,000

Prior to today, the Bitcoin price jumped from $48,600 and $55,000 over five straight bullish days, gaining almost $6,400 in overall valuation. This Wednesday, the buyers even attempted to touch the $56,000 line but failed to go up any further.

Bitcoin Price Goes Down After Facing Rejection At $56,000

The parabolic SAR for the daily Bitcoin price shows that the presently market sentiment is bullish. During its upward surge, the Bitcoin price had managed to flip the 20-day SMA from resistance to support. It seems like the recent bearish correction prevented BTC from getting overvalued.

Looking at IntoTheBlock’s IOMAP, there is a lack of strong resistance levels up top. The only notable on is at $56,000, wherein 133,500 addresses had previously purchased 77,250 BTC tokens.

According to Glassnode, the amount of Bitcoin steadily leaving exchanges is increasing, so that’s a very positive sign. 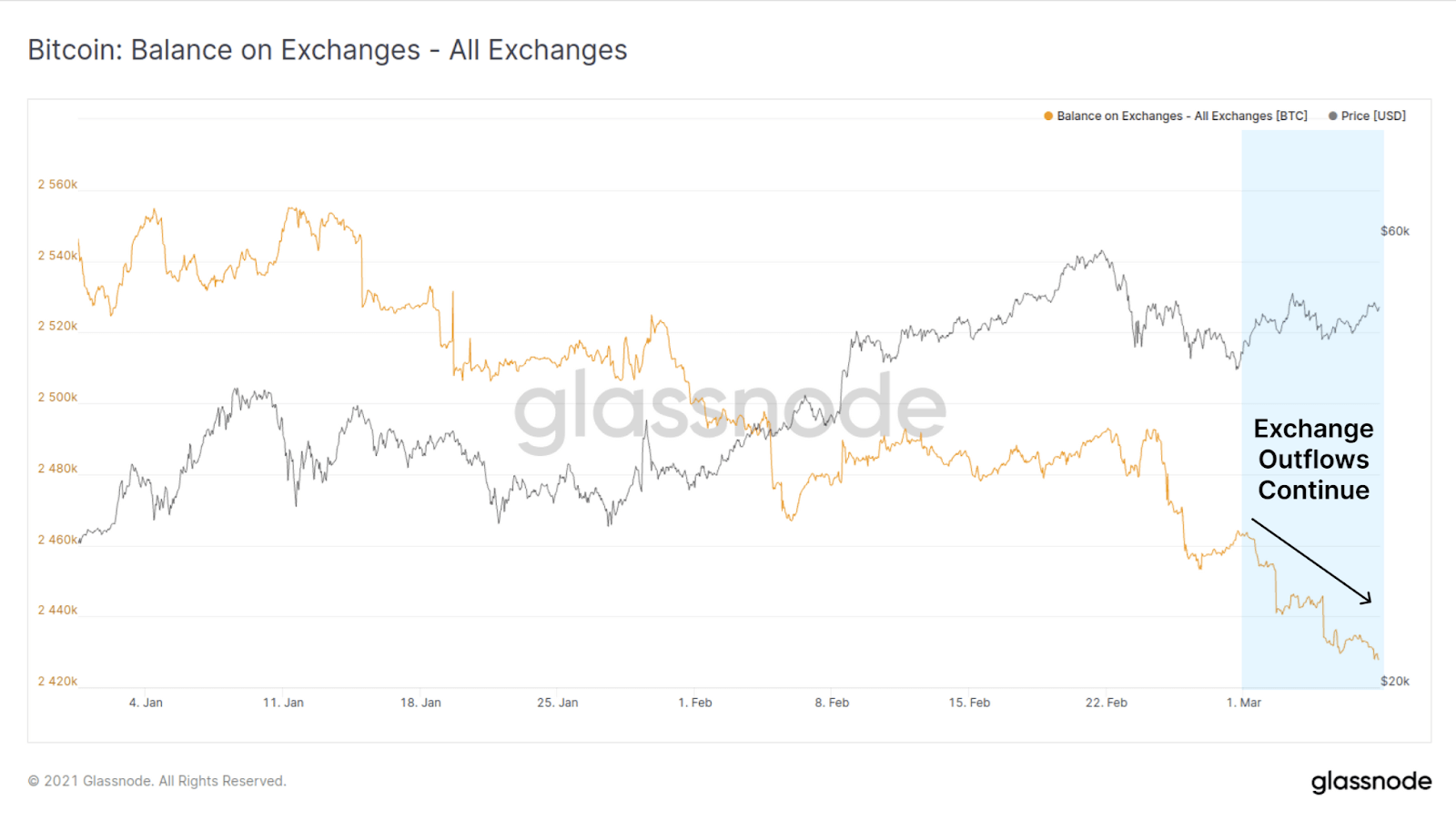 “BTC Balance on Exchanges continues its uninterrupted march downwards with another 35,200 BTC withdrawn this week.”

Now, when looking at the Miner Position Change metric, we can see that the miners have stopped selling off their tokens. 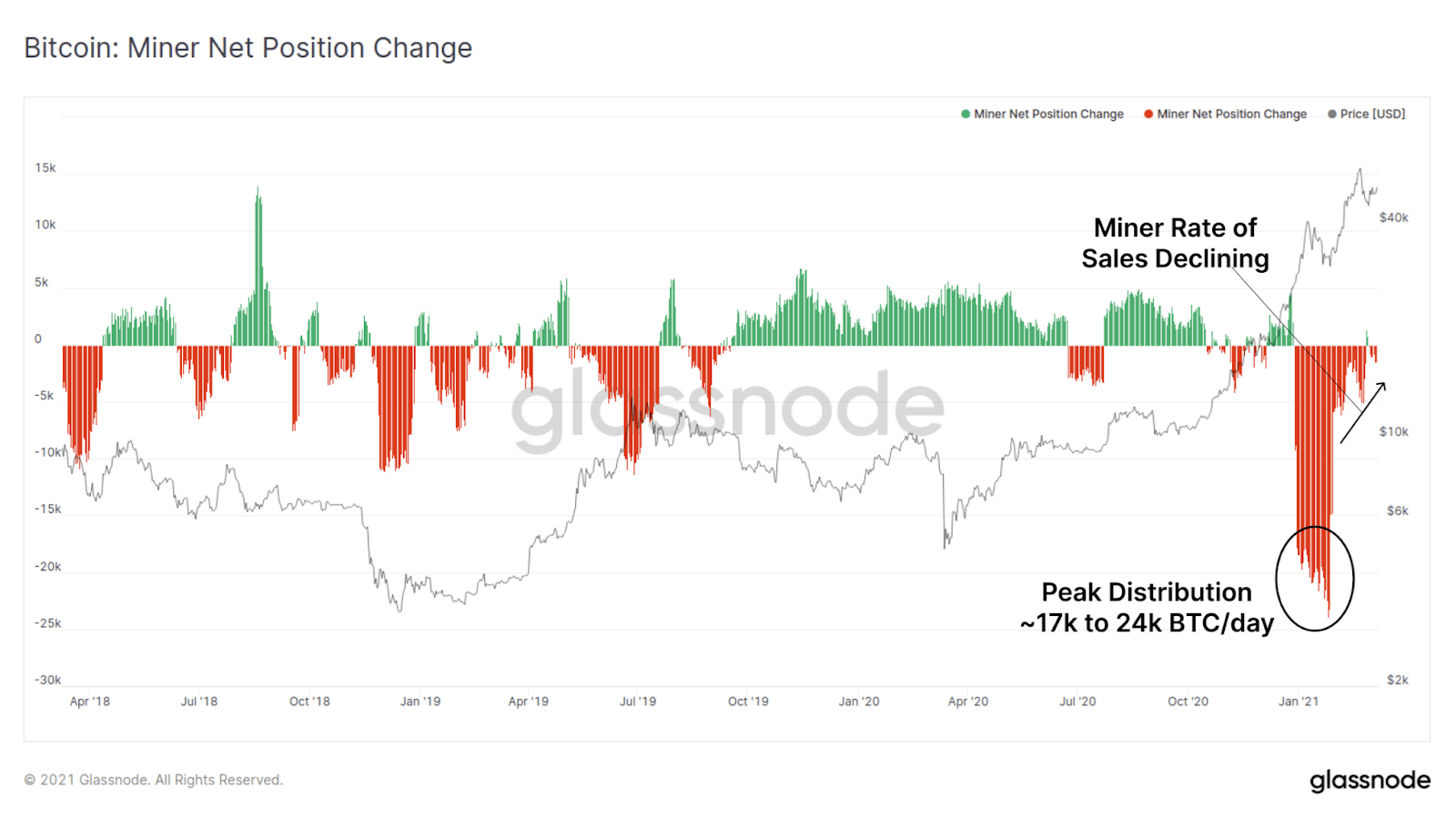 “Throughout February however, we can see the rate of miner sales is declining, where today, it is almost net neutral. Despite newly minted coins representing only a fraction of daily trade volume (i.e. miner selling is a small net force these days), it appears that even miners are returning to neutral or accumulation mode.”

Aker AS, a Norwegian industrial giant, announced recently that it has established Seetee AS, a new company dedicated to investing in projects and companies throughout the Bitcoin ecosystem.

In a press release, Aker said that Seetee will retain all its liquid investable assets in Bitcoin and will initially be capitalized with NOK 500 million. The venture will focus on investing and owning Bitcoin in addition to establishing partnerships with leading players.

Aker noted that the new venture aims to launch Bitcoin verification operations as well as invest in innovation projects and companies in the blockchain ecosystem. The company added that Seetee will actively partner with other companies to focus on mining operations.

Øyvind Eriksen, President and CEO of Aker ASA, had this to say:

With the launch of Seetee, the Aker Group makes another move into software and fintech. We are very excited about the industrial opportunities that will be unlocked by Bitcoin and blockchain technology, and want to contribute forcefully to that effort. These technologies have the potential to reduce frictions in our day to day lives, enhance the security of our digitally driven economies, and unlock new business models for innovation. We look forward to addressing these and other applications together with Blockstream and other partners.

Norwegian billionaire businessman Kjell Inge Røkke, the Chairman of Aker, highlighted Bitcoin’s significant rally and noted that the asset is fast becoming a “mainstream investment.” The executive mentioned the institutional interest that Bitcoin has garnered, citing Tesla, MicroStrategy, Square, etc as examples of corporations now venturing into Bitcoin. He said:

Bitcoin price will likely attempt to touch and cross over the $56,000 resistance barrier.