Bitcoin's popularity had a significant influence on the cryptocurrency market. It's popularity and market capitalization have made it an important investment asset, which is why it is crucial to keep an eye on the price of Bitcoin.

The cryptocurrency market is relatively volatile, and the prices of Digital currencies can change quickly depending on market conditions. Let us look at the Bitcoin price prediction for 2021 and beyond to see if Bitcoin prices could rise further or have peaked.

Bitcoin was invented in 2009 by the pseudo-anonymous Satoshi Nakamoto. The real identity of Satoshi remains a mystery to this day. Since its inception, Bitcoin has gone on to become the most popular cryptocurrency in the world and the largest by market capitalization.

Bitcoin is a completely decentralized cryptocurrency, keeping it free from a central authority's influence and giving users control of their money. Transactions on Bitcoin are done between two individuals directly, without any third-party involvement. This drastically reduces the transaction fees. Bitcoin's decentralized nature also has another advantage, which is that if part of the network goes down, transactions on the Bitcoin network can still go through.

Bitcoin has had a reasonably volatile price history since its inception. Initially, Bitcoin traded for almost next to nothing, with the currency witnessing its first real price rise in July 2010, when the value of 1 Bitcoin went from $0.0008 to $0.08.

Bitcoin's real increase in value came in 2013 when the cryptocurrency's price increased to around $13.50. Bitcoin's price saw a sustained increase, and it reached $220 before falling back to $70. This was the first time in its history that Bitcoin experienced a rally and a crash.

Bitcoin remained relatively stable until October 2013, when it rallied again, trading at around $100 and reaching $195 by the end of the month. By November, the cryptocurrency's value went from $200 to over $1000, trading at $1075 at the end of November 2013. This rally was attributed to new Bitcoin exchanges and miners based in China who had entered the market.

After Bitcoin posted these gains, its price faced a lot of volatility. This was due to rumors of poor security and poor management at Mt. Gox, which was involved in 70% of all Bitcoin transactions. These rumors made the markets very nervous and Bitcoin, which had reached a high of $1079 on December 4, 2013, dropped to $760 by December 7, 2013. A fall of over 29% in two days.

The price of Bitcoin stabilized in early 2014 but crashed again when Mt. Gox filed for bankruptcy protection. 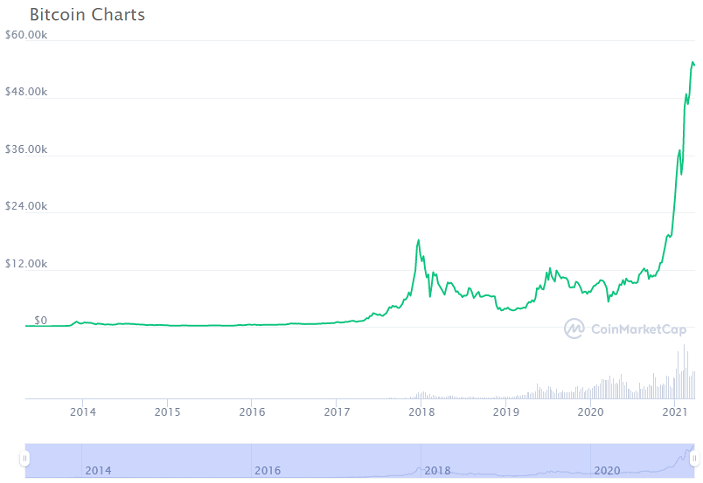 However, 2020 saw the cryptocurrency experience sustained growth thanks to renewed interest in Bitcoin by investors. Investors with more than 1000 bitcoins increased drastically, and the currency was also attracting interest from institutional investors. This is because more and more institutions recognized Bitcoin's potential as a store of value during the rapid inflation faced by the Dollar because of the Covid-19 stimulus package.

The Bitcoin price prediction for 2021 states that the cryptocurrency will continue to perform well and is expected to be bullish for most of the year.

Investors are buying Bitcoin and using it as a hedge against inflation, and this trend is set to continue. Bitcoin's current bull run is not dependent on institutional adoption.

Institutions and individuals using it as a hedge against inflation is helping it retain and increase its value.

Another factor predicted to influence the price of Bitcoin in 2021 is the fact that countries like Japan, the USA, and South Korea are looking at integrating the cryptocurrency into their economy. According to Gov Capital, Bitcoin's price could reach $39,169 by the end of 2021. However, since we are already past this level, we can be more optimistic and expect BTC to reach $41,000, aka its recent all time high, again.

The Bitcoin price prediction states that Bitcoin will continue to see rapid adoption in 2022. Most predictions state that the rate of adoption will triple in 2022. Bitcoin will give serious competition to traditional stores of value, with BTC price expected to breach the $50,000 psychological level in 2022.

The Bitcoin price prediction 2023 states that Bitcoin's price will continue to increase in 2023. The price of Bitcoin will consolidate in and around the $55,000 zone and then reach the $75,000 mark. This can be attributed to institutional adoption and investors using Bitcoin to hedge against inflation.

Bitcoin expects to continue to see significant growth in 2024 due to the decreasing amount of circulating supply and the supply crunch coming from institutions lapping up the coins due to FOMO. As such, this could potentially push the price towards $100,000 in 2024.

The fourth bitcoin halving, scheduled in 2024, could significantly increase the price of Bitcoin. Experts believe that the cryptocurrency could go up to $100,000, with some experts stating that it could even go past $400,000 in 2025.

Prime XBT states that Bitcoin will be valued at over $400,000 by the end of 2025. If this prediction holds true, then it will equal or surpass the market capitalization of gold.

Trading Beasts has been relatively conservative with its Bitcoin price prediction. By the end of 2022, they expect the price to be around $45000 while the expected price in 2023 is $70000.

Tim Draper, Bitcoin advocate and venture capitalist, predicts that the price of Bitcoin will reach $250,000 by the end of 2023. Draper firmly believes that Bitcoin can pose a serious challenge to traditional currencies.

Although it is difficult to predict Bitcoin's price accurately, almost every Bitcoin price prediction thinks that Bitcoin will have an overwhelmingly positive 2021, with the digital currency's value increasing even beyond 2021. Experts can have an idea of the currency's future performance by analyzing past price trends.

The most valuable cryptocurrency is expected to see a sustained period of growth until 2025. With investors increasingly realizing Bitcoin's value as a store of value and using it to hedge against inflation, the coin has the potential to grow even beyond 2025 and reach record price levels.

Is Bitcoin A Reliable Investment?

Given the recent developments with Bitcoin, it is safe to say that, yes, Bitcoin is a reliable investment. Bitcoin will always be an investment option as it is the first major cryptocurrency in the world. Recent investor interest is also likely to drive up the cryptocurrency's value.

It is difficult to answer this question as the value of a cryptocurrency depends on several external factors and market conditions, which can change at any time. However, most experts predict that the value of Bitcoin in 2030 could be over $500,000.

Will Bitcoin's Value Increase Or Decrease?

Experts and cryptocurrency enthusiasts believe that Bitcoin's value will increase in the future. According to them, the cryptocurrency will be bullish for the foreseeable future.

What Is Bitcoin Halving And How Will It Affect The Price?

Bitcoin halving controls the circulation of bitcoins, making the currency more scalable. The halving occurs each time 210,000 blocks are mined. There are currently 18.5 million BTC in circulation, with most predictions stating that BTC in circulation will reach 21 million by 2140. Bitcoin's first halving saw the currency rally an incredible 93%, and experts in the cryptocurrency space believe that the same could happen again when the next halving occurs.

Can Bitcoin Be Exchanged For Fiat Currency?

Bitcoin is an electronic currency, so to exchange it for traditional currencies, you will have to deposit it in an exchange and convert it to fiat currency. You can exchange your Bitcoin tokens for conventional currencies like USD and Euro.

What Is Bitcoin? A Beginner's Guide

Is Bitcoin A Good Investment In 2021?