Over the last three days, the Bitcoin price has been trending horizontally around $31,650 and is presently sitting on top of the $31,600 support wall. As per the TD sequential detector, BTC could have three more bearish sessions before flashing the red-nine candlestick. The MACD shows sustained bearish momentum, so a further drop is expected. 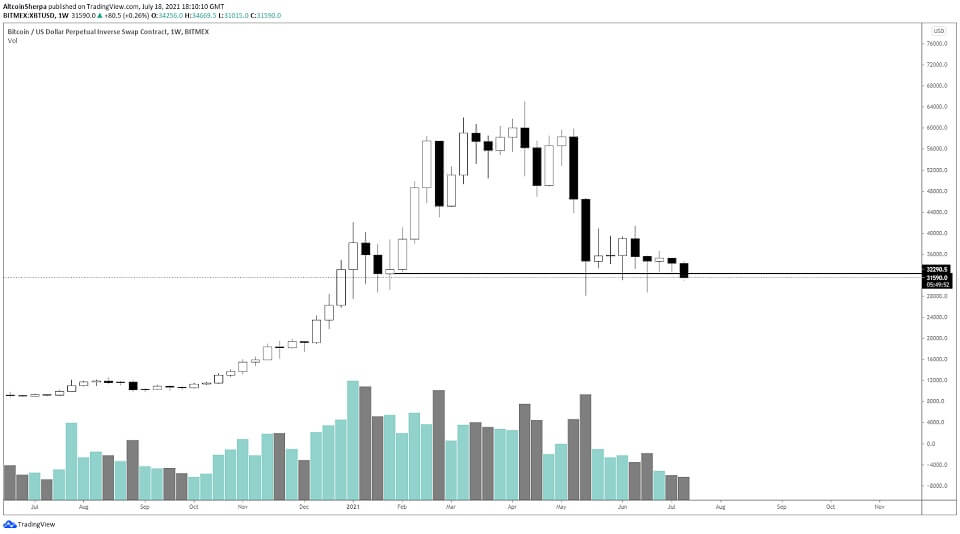 Crypto analyst William Clemente recently said that Bitcoin is entering its first major volatility squeeze, following the last one in April that pushed prices below their all-time high and triggered the bull rally in July of 2020.

According to the analyst, this is a rare occurrence that essentially signals a brewing bull market for Bitcoin. He noted that "a big move [is] coming.”

“William beat me to it! We’re officially in a volatility squeeze ladies & gentlemen”.

The volatility squeeze pattern surfaced after analysts pointed out that BTC was imitating the technical analysis approach. This is known as the Wyckoff accumulation semantics. Essentially, analysts had expected that Bitcoin hits $50,000 in the near term if it successfully follows through the fourth phase of the accumulation. But, ZeroHedge is convinced that Wyckoff has “broken perfect structure on Bitcoin,” implying that that chapter is done.

On the other hand, some analysts remain optimistic. Investor Lark Davis maintains that the fears are no different from the usual. He puts his faith in the long-term possibilities.

Crypto trader and analyst “RektCapital” took to Twitter to say:

“Despite the recent rebound, BTC is still threatening to lose its multi-month Higher Low. BTC needs to Weekly Close above ~$34600 to secure this Higher Low as support for an 8th week in a row."