After pushing past the $50,000 mark, BTC has been in a bit of a rut, with subsequent sessions seeing it try and fail to go past it again. We saw BTC fall in the subsequent session after pushing towards $50,000 again on the 25th of August, closing at $47,977. However, with the 20-day SMA acting as support, the price rebounded during the next session, rising by over 3%, ending the session at $49463. However, BTC could not carry this momentum into the weekend, and its price stagnated over the weekend before opening in the red on Monday.

After a weekend where the Bitcoin price did not move much, we saw BTC endure a bullish start to the week, with BTC opening in the red on Monday, and with bears in control of the session, BTC fell by almost 1.5% to close at $48,730. Tuesday saw BTC slip below the 20-day SMA and fall to its support level of $47,500. However, with the presence of strong support at this point, BTC rebounded in the very next session and went past the 20-day SMA. Whether BTC can maintain its current momentum remains to be seen. 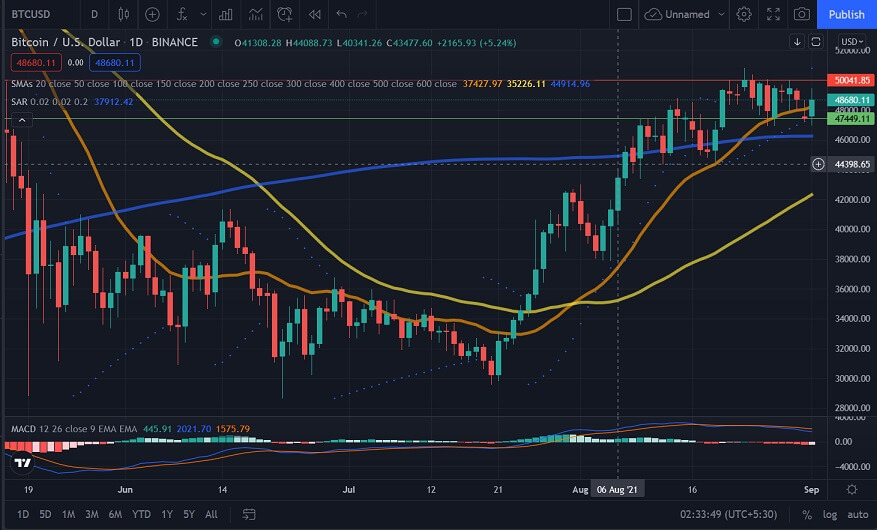 The Bitcoin price chart shows us that the buyers control the current session, who have pushed BTC beyond the 25-day SMA. While the current session is fairly bullish, we can see that both the MACD and the Parabolic SAR are bearish. However, we could see both flip back to bullish if the Bitcoin price could go past $47,900. There is also the possibility that sellers could push back the price, and BTC could fall back to $47,500.

Looking at the Bitcoin price 4-hour chart, we can see that after finding support at $47,500, BTC has had quite a few bullish sessions, which have seen it push past both the 20-bar SMA and the 50-bar SMA. Earlier, BTC had fallen $48342, to $47,500, with both the 50-bar and the 20-bar SMA acting as resistance. After breaking past the resistance, the MACD and the Parabolic SAR both turned bullish, as indicated by the chart. With BTC already $48,750, BTC could be pushing towards the $49,000 mark during the current session. 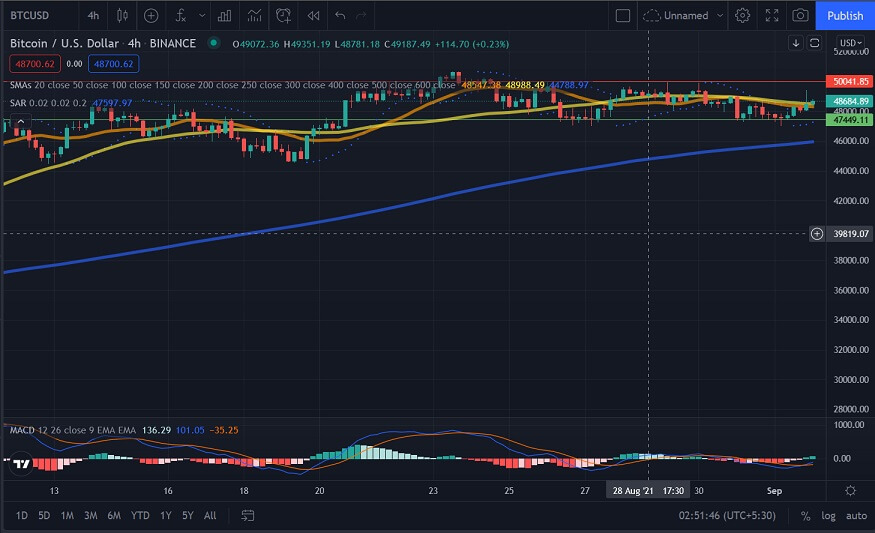 Genesis Digital Assets Are Buying Up To 200,000 Bitcoin Miners

Canaan, a lead supercomputing service provider and inventor of the first ASIC Bitcoin miner, recently announced that it has secured an option to sell 200,000 Bitcoin miners to Genesis Digital Assets. If executed, this would be the largest Bitcoin mining machine sale ever made.

Genesis Digital has previously purchased over $93 million of Canaan’s mining machines. Included in the renewed partnership deal was the sale of an initial 20,000 mining machines, which included the purchase option of up to an additional 180,000 machines. Chairman and Chief Executive Officer of Canaan, Nangeng Zhang, commented:

“Since we entered the long-term partnership with Genesis Digital Assets earlier this year, we have reached several great deals. This order with an option of future large purchases further solidifies our collaborations and reflects both parties’ confidence in the prospect of the cryptocurrency mining industry. All these mutually beneficial deals demonstrate the quality of our products and our endeavor to deliver for clients, despite the overall challenging supply chain condition. We remain diligent in helping miner clients expand their computing power while generating value for our shareholders.”

Genesis Digital Assets is already one of the largest Bitcoin mining companies in the world. They have brought over 300,000 miners online since 2013. As of August, the firm’s data center had a mining capacity of over 170 megawatts, a total hashrate of more than 3.1 EH/s, which is over 2.4% of the global Bitcoin mining hashrate.