As things stand, the Bitcoin price will aim to take down the $59,000 resistance barrier before making a jump towards higher levels. The RSI tells us that BTC still have room for growth before it gets overbought.

The IOMAP shows a lack of strong resistance barriers on the upside, which is a positive sign for the buyers. On the downside, the 20-day SMA ($56,000) provides healthy support since over 1.3 million addresses have bought >700,000 BTC tokens here.

Santiment shared the following pic while commenting on the age of dollars entering the market. 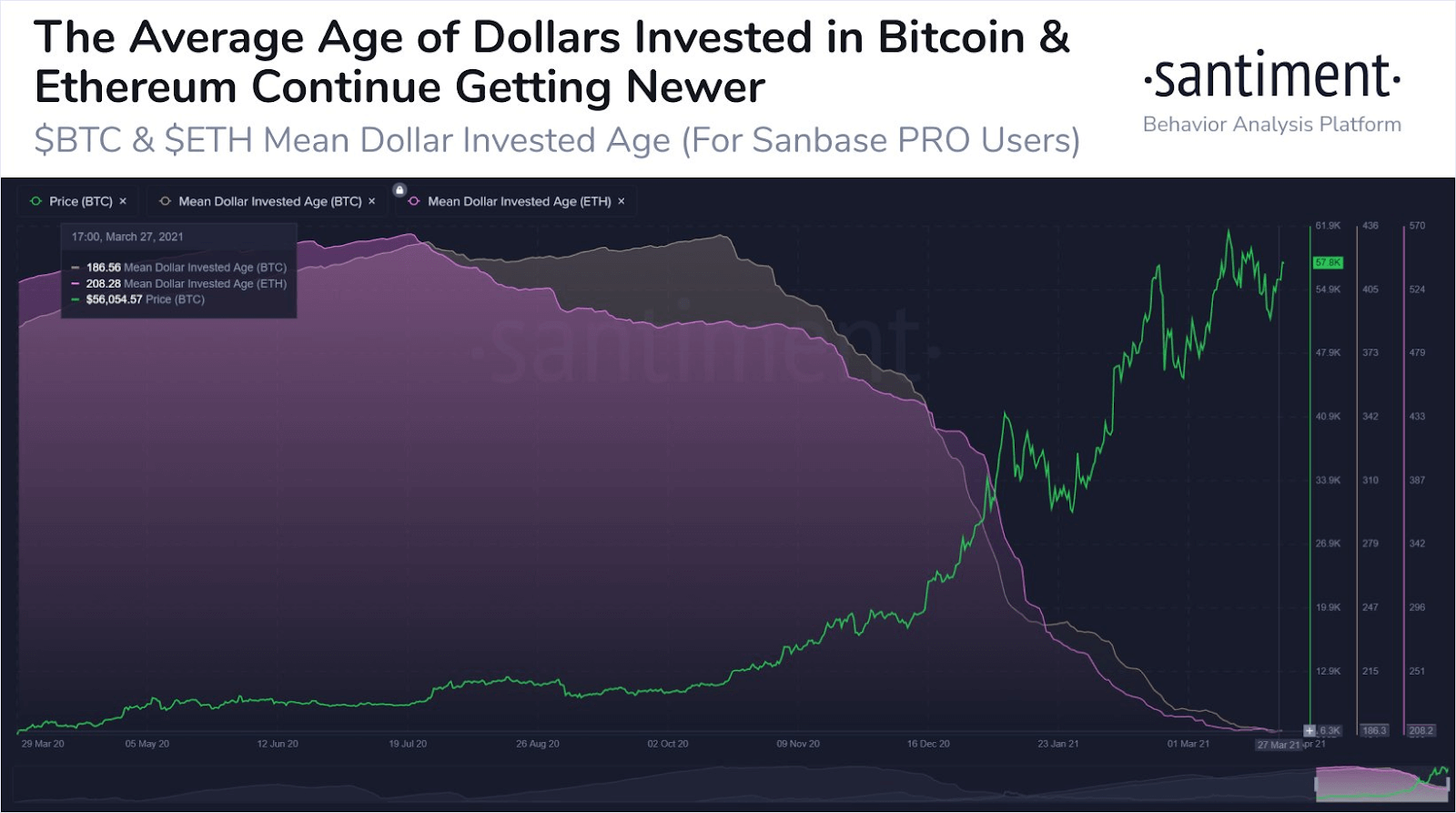 “Dormant $BTC and $ETH continues to cycle with many new individuals in the space bringing down the average age of investment for each. A younger and younger mean dollar invested age is an excellent indication of healthy utility for #Bitcoin & #Ethereum.”

Crypto analyst who goes by the name "PlanB" recently said that Bitcoin’s bull market is just getting started despite its recent struggle to stay above $60,000. 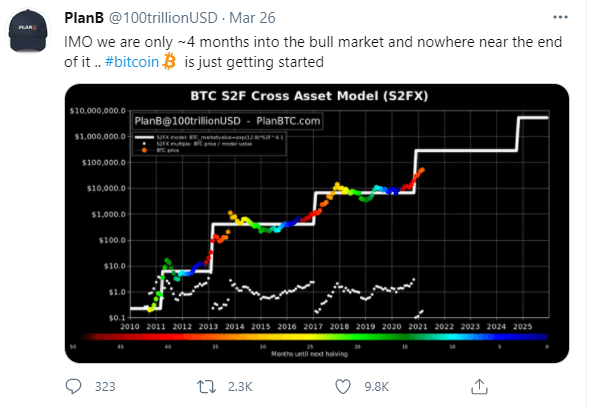 In my opinion, we are only about 4 months into the bull market and nowhere near the end of it. Bitcoin is just getting started.

To support their argument, PlanB considered Bitcoin’s historical performance in terms of momentum. According to the analyst, BTC’s relative strength index (RSI) has not yet reached its peak. RSI measures the pace of price movements for a given asset. 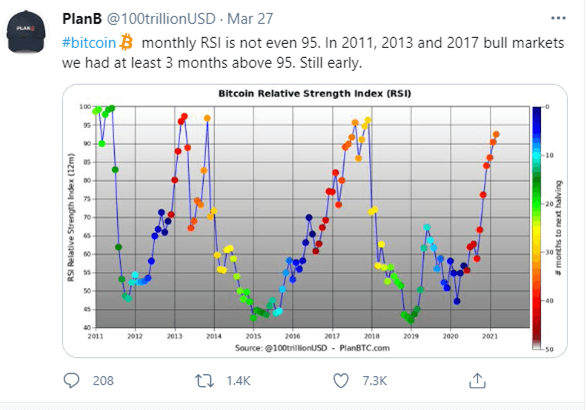 While PlanB is long-term bullish on the leading cryptocurrency, they believe Bitcoin is still facing headwinds. They added that a Bitcoin supercycle (where Bitcoin would ascend to $1 million) is currently out of the question as the analyst believes that most market participants are “not completely rational.”

Cathie Wood, the CEO of Ark Invest, recently praised Bitcoin and cited its limited supply and increasing demand as two main catalysts. In a video, she said:

..if we add all the potential demand relative to the limited supply, we come up with incredible numbers over the long term.

Wood predicted a significant increase in BTC’s market cap. She noted that the recent $1 trillion milestone is “nothing compared to where this ultimately will be.” The CEO said that the correlation of Bitcoin returns to other asset classes is low. She pointed out that the low correlation makes it an attractive investment choice as every asset allocator looks for non-correlated assets.

For the uninitiated, asset correlation refers to the degree to which two or more investments move in relation to each other.

Wood’s Bitcoin stance appears to be influenced by the increasing demand for the asset. Several major establishments have added BTC to their balance sheets in recent times. She advised investors looking to minimize volatility or maximize the Sharpe ratio to add some Bitcoin to their portfolios. She recommended investors allocate 2.5 to 6.5% of their portfolios to BTC.

Miami Mayor Francis Suarez recently said the US should mine more Bitcoin due to national security reasons as 90% of the activity happens outside the country. Suarez added that countries that account for most mining use dirty energy. The US holds the key to flipping the narrative, according to the mayor.

Due to the availability of necessary resources, Suarez opined that the US, led by Miami, can become a mining hub. He added that more mining in the US would benefit the cryptocurrency community because of clean energy like unlimited nuclear power. 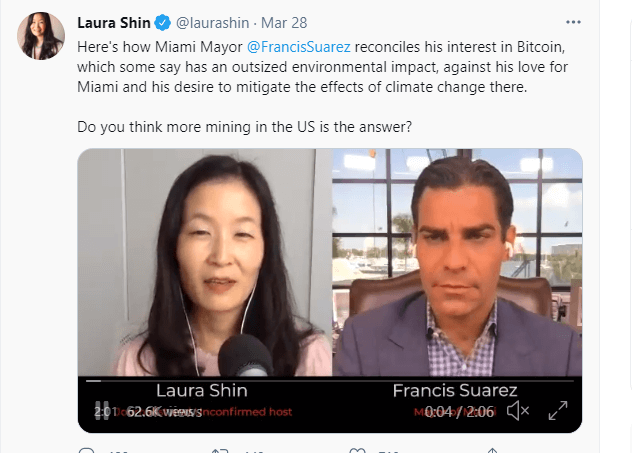 Here's how Miami Mayor @FrancisSuarez reconciles his interest in Bitcoin, which some say has an outsized environmental impact, against his love for Miami and his desire to mitigate the effects of climate change there.

Do you think more mining in the US is the answer?

The mayor is optimistic that we will overcome the environmental concerns caused by cryptocurrency mining as new technology emerges to ease mining power needs.

Suarez, a Bitcoin proponent, has made inroads to market Miami as global cryptocurrency capital. In February, he announced that Miami would pay municipal workers and accept tax payments in Bitcoin. He also revealed plans to invest city funds in cryptocurrency.

The Bitcoin price needs to overcome the $59,000 level before aiming for the all-important $60,000 psychological zone.