Bitcoin Price Prediction: BTC Attempts To Break Above The $46,5000 Resistance

As things stand, the Bitcoin price is hovering between strong resistance and support levels at $46,500 and $44,000. The parabolic SAR has reversed from positive to negative. This shows us that the market sentiment is negative. The RSI is trending in the neutral territory.

Did The US Government Just Promote Bitcoin?

Several Bitcoin pundits have predicted that Bitcoin will soon reach $1,00,000. In recent times, the flagship crypto has been getting promotional traction from the same organizations that steadily criticize its credibility. It appears that the US government in its usual fashion is helping BTC live up to analysts’ expectations with its advertisement.

According to the US government, a stimulus bill is needed to sustain the welfare of its citizens through the global Covid-19 pandemic. This increased inflation in the economy has proved to be very beneficial for Bitcoin’s price action and adoption. Last year, when the first check was sent out, the stock market took a hit as inflation forced investors to find shelter in Bitcoin. Gold dropped significantly too when people started to question its scarcity and its historic performance.

Just recently, the government announced that a $1.9 trillion stimulus package is set to be approved by the House and sent to the Senate. Following the announcement, Bitcoin tumbled upwards. Although the bullish recovery cannot be solely credited to the news, Bitcoin is bound to benefit from the result of the excess printing of the USD. Ironically, this comes shortly after Treasury Secretary Janet Yellen poked into the asset’s credibility. She had said:

I don’t think that Bitcoin is widely used as a transaction mechanism. It is a highly speculative asset and I think people should be aware it can be extremely volatile. I do worry about potential losses that investors can suffer.

Yellen’s skepticism towards Bitcoin may influence future policies going forward, but Bitcoiners are hopeful about seeing a positive turn out as she had previously spoken on the necessity of digital currencies.

Glassnode Shows That Miners Are Accumulating Bitcoin Instead Of Dumping

Lex Moskovski, the CEO of Moskovski Capital, recently shared a Glassnode chart, which says that Bitcoin miners have stopped selling their BTC and have started to accumulate it. 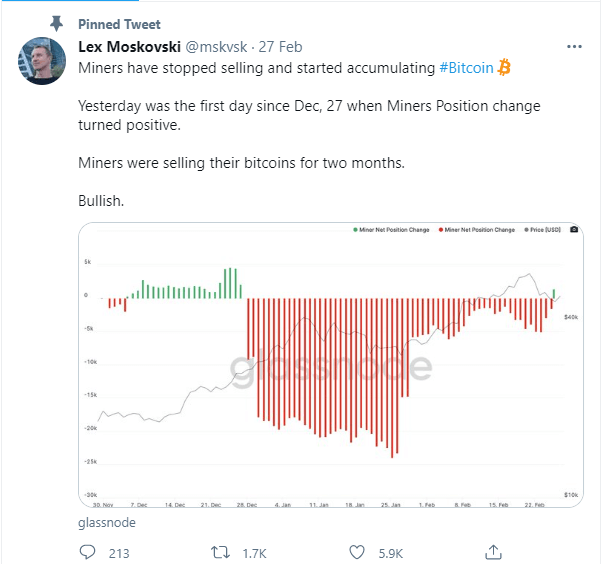 The chart indicates that for the first time since December 27, the Miner Net Positive indicator has gone green. Miners now are not in a rush to sell their Bitcoins but prefer to accumulate them after selling their holdings for around two months in a row.

Grayscale, one of the largest accumulators of Bitcoin and other digital currencies, lost a staggering $2.6 billion in a single day. The worth of Bitcoin held by Grayscale has shrunk by $2.1 billion – from $32.832 billion to $30.724 billion recently.

Bitcoin Is Expected To Reach These Levels

We expect Bitcoin price to continue trending horizontally along this level.