Today, the Bitcoin price has crashed below the 200-day SMA and nearly dropped to $30,000 and almost tested the 2021 yearly open of $28,250 before it retracted. The MACD shows increasing bearish market momentum, so it is very likely that the $35,500 support will be retested. 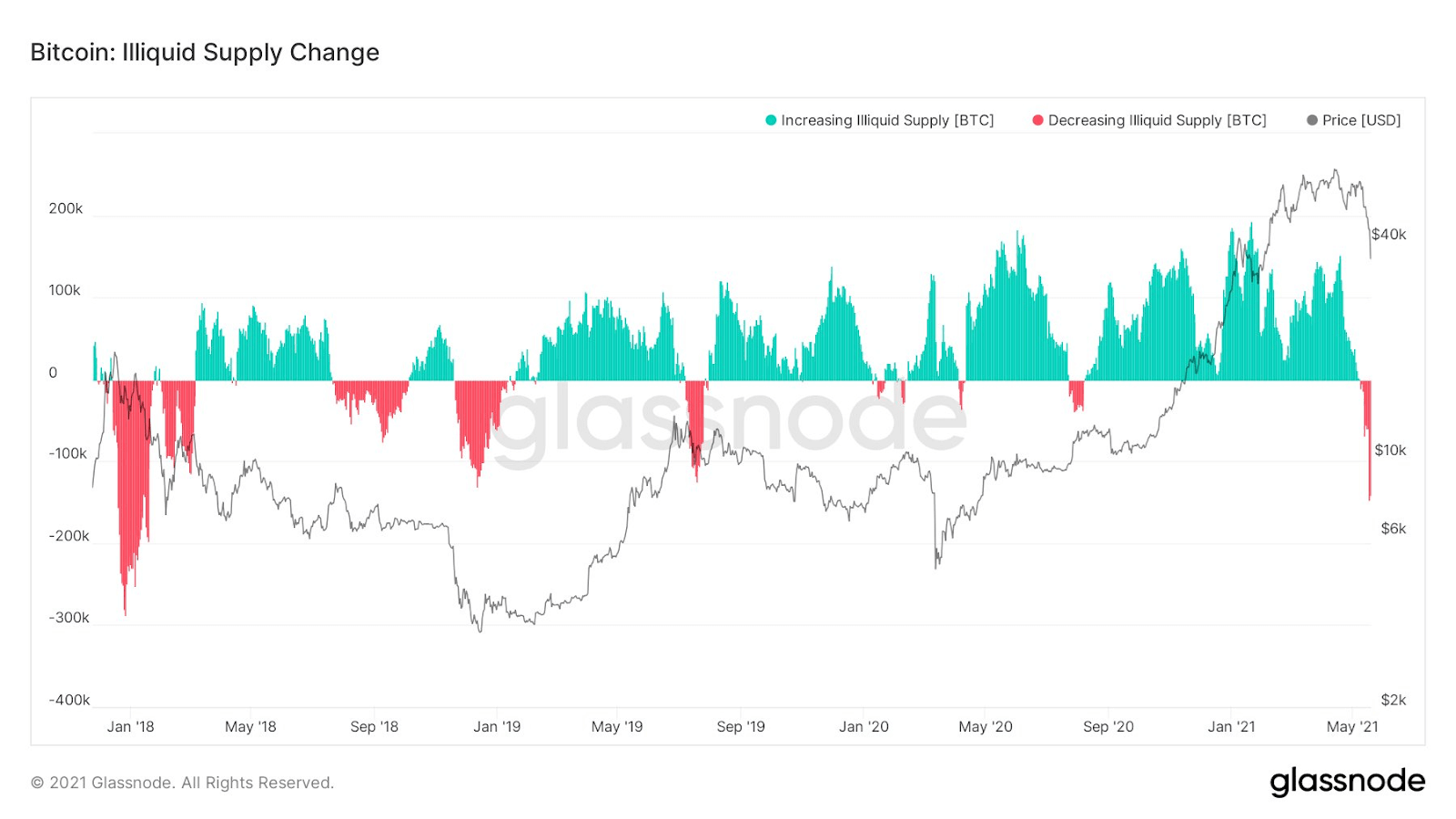 Glassnode noted that the investors are panicking as Bitcoin price experienced the biggest drawdown of illiquid supply since January 2018.

As a result, these guys are actually selling their BTC at a loss.

"70% of #Bitcoin Short Term Holders are now at a loss. Soon, panic sellers will run out of profitable coins to sell, at which point downward pressure will disappear."

Now let’s look at the unrealized profit and loss. 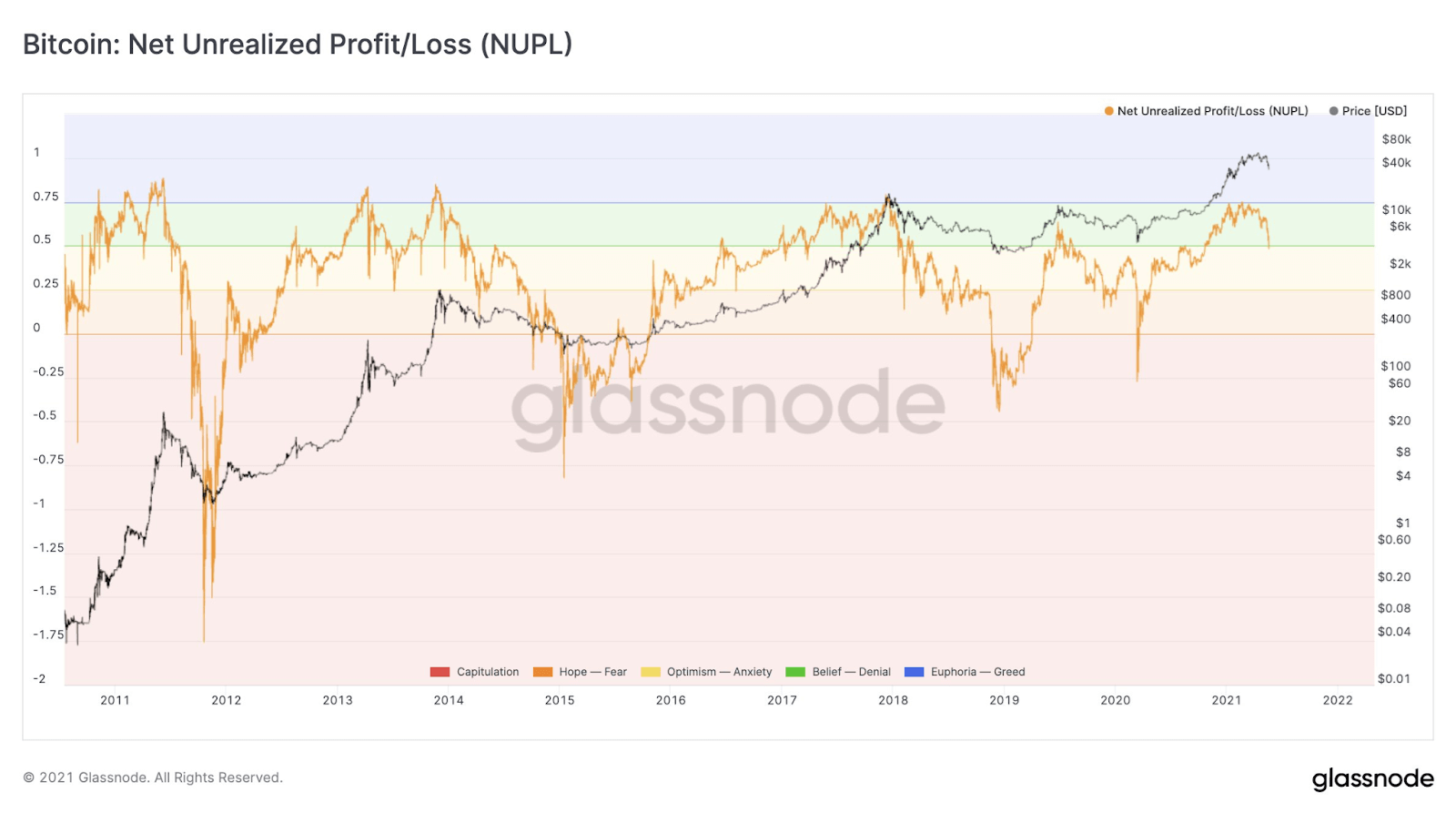 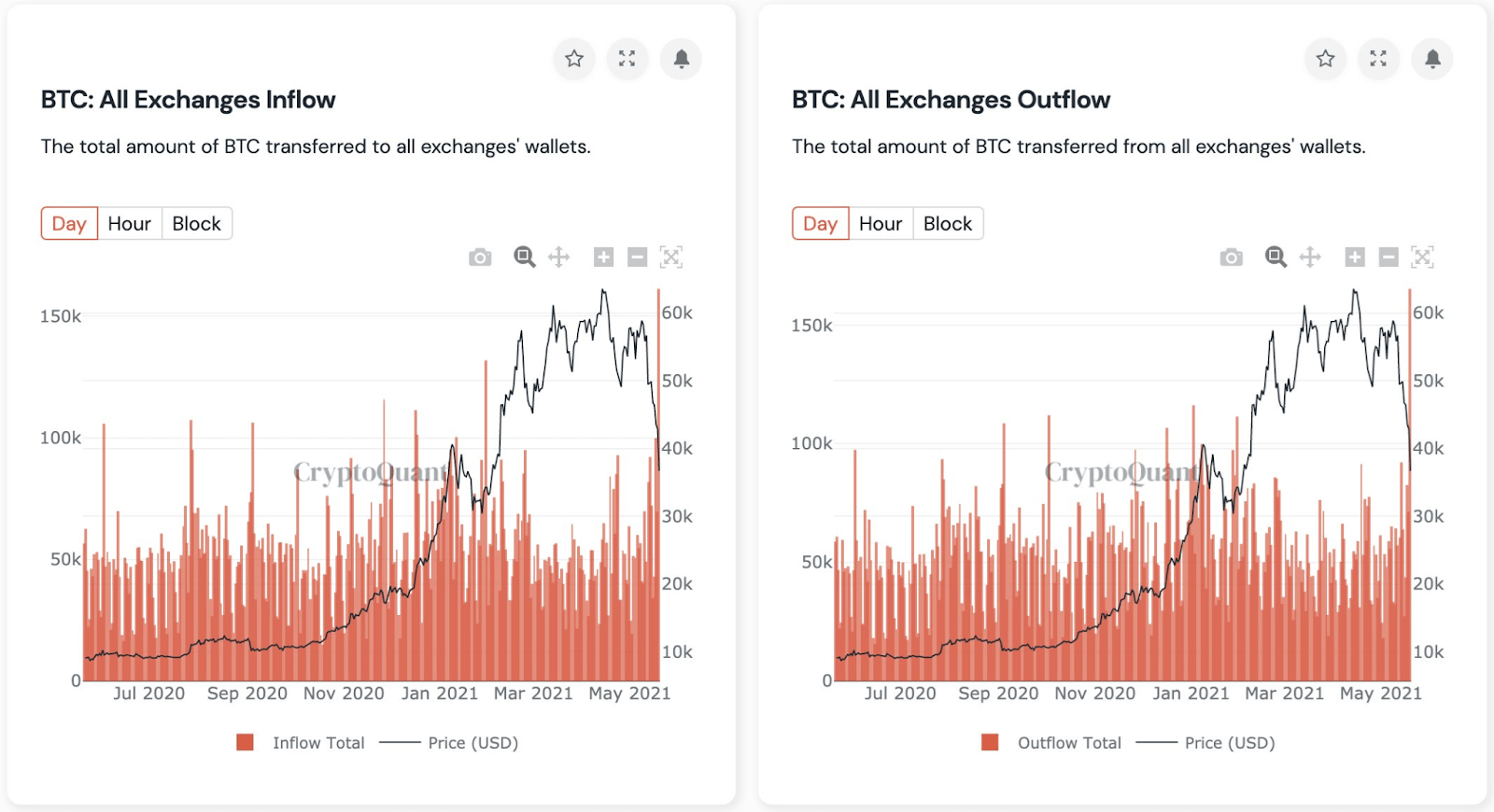 Overall exchange inflows and outflows are on the rise as more investors are selling and buying the dip. The overall netflow of the exchanges is negative, which shows that outflows are more than the inflows. 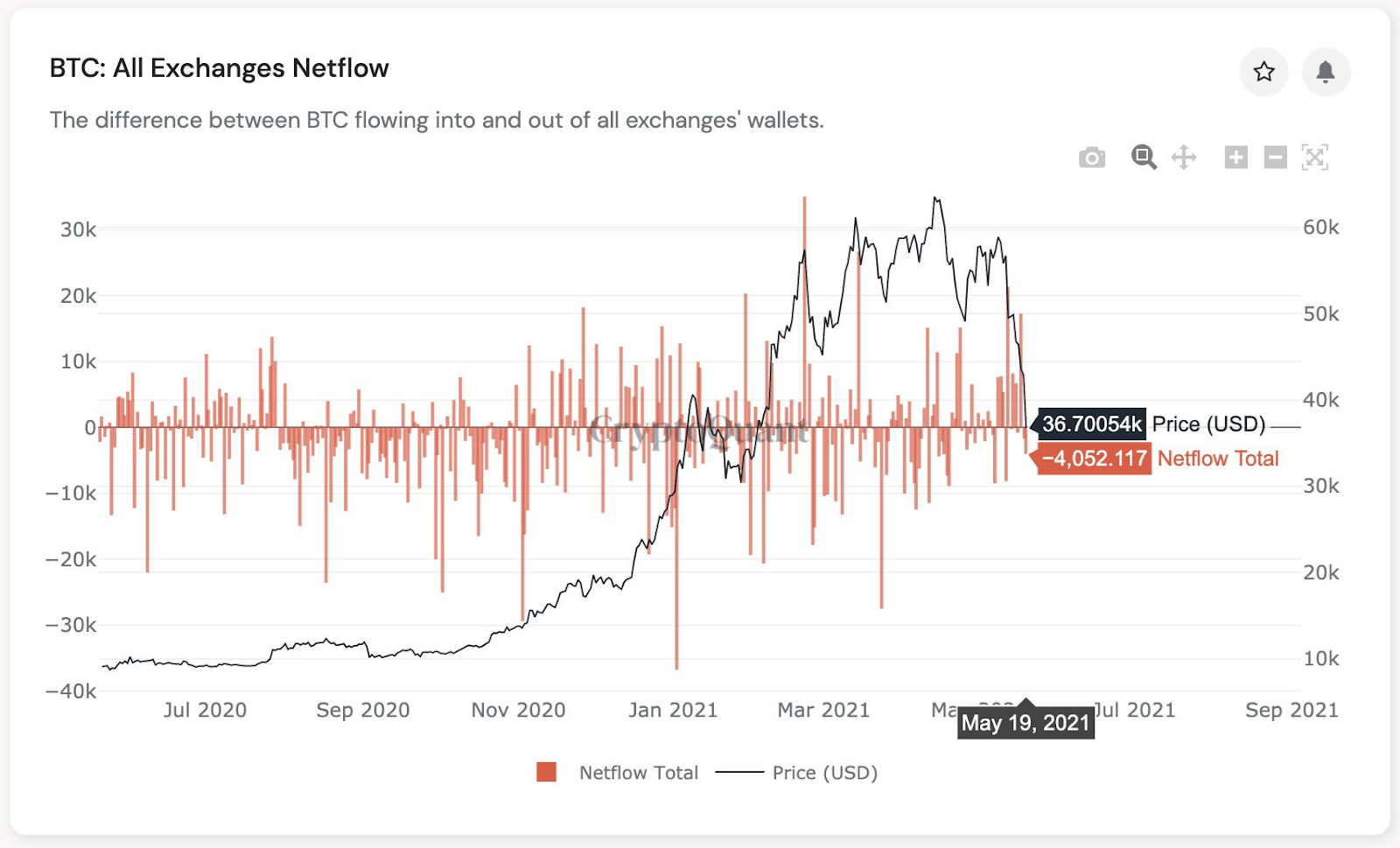 Having said that, the whales continue to dump their coins. 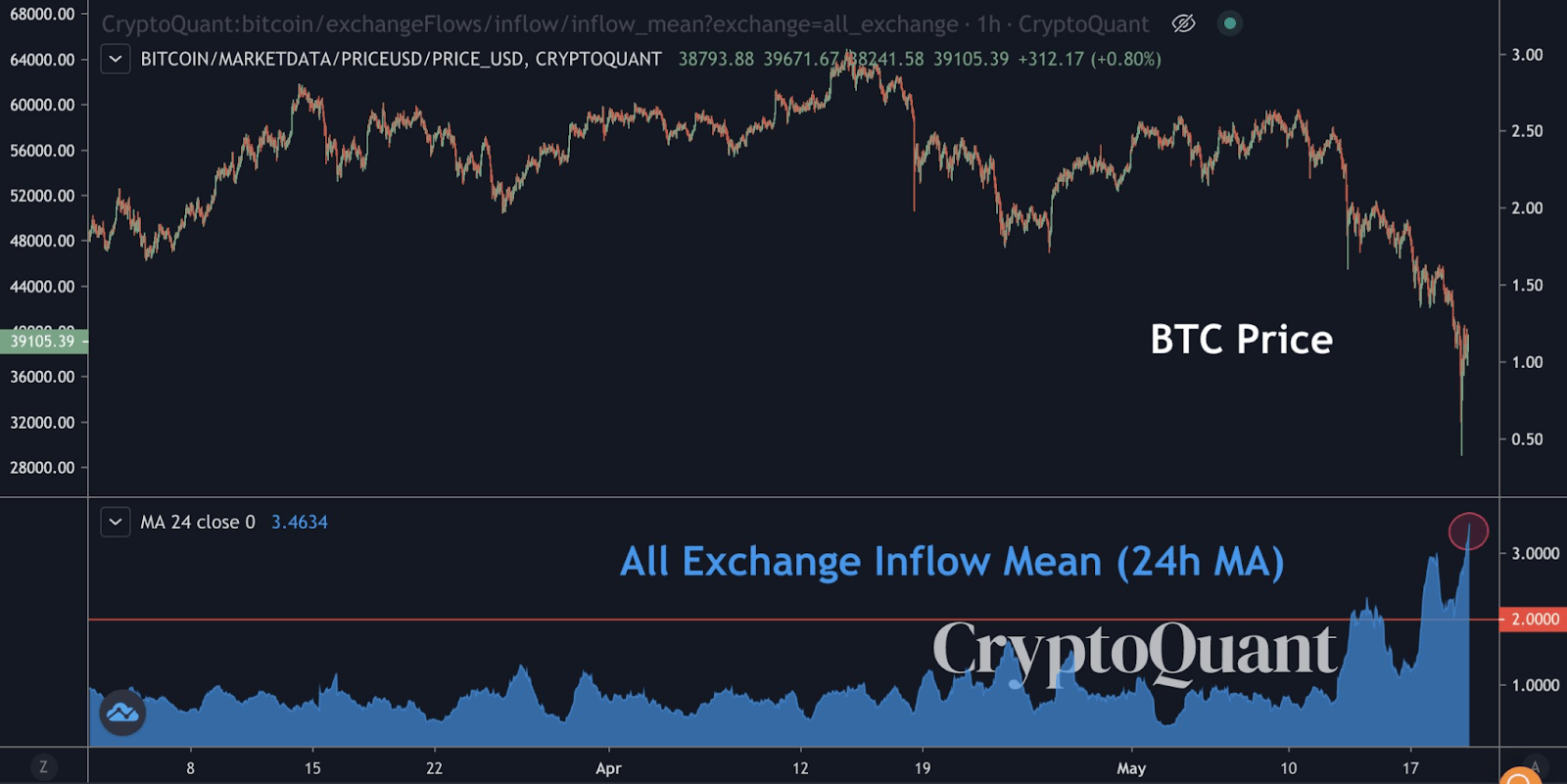 "This whale dumping indicator hit a year-high since the March great sell-off last year. Whales keep depositing $BTC into exchanges. If this is an orchestrated effort, it will go down again. If not, we may retest the bottom again at least."

The Indian government appears to be reconsidering its stance on cryptocurrencies with the creation of a new regulatory panel. A recent Economic Times report cited three sources privy to discussion on the formation of a panel of experts to regulate cryptocurrency trading in the country.

The report quoted an unnamed official with knowledge of the matter.

There is a view within the government that the recommendations made by the Subhash Garg are dated and a fresh look is needed at use of cryptos rather than a total ban.

The panel may investigate the use of blockchain for technological enhancement and suggest ways to regulate crypto assets separately from fiat currencies. It may also work closely with the Reserve Bank of India on any proposed digital Rupee project.

The report noted that Anurag Thakur, the Minister of State for Finance and Corporate Affairs, may be considered to join the new committee. Thakur and Finance minister Nirmala Sitharaman have both previously said that the government would prefer to take a careful approach to regulate crypto assets instead of banning them.

Back in 2018, the RBI had banned all banks from allowing customers to trade in cryptocurrency. However, this was overturned by the Supreme Court in February 2020 following a petition filed by Indian fintech entrepreneurs and experts. There have been many reports about a blanket ban since then.

The Cryptocurrency and Regulation of Official Digital Currency Bill 2021 were scheduled to be addressed in parliament in March but it was deferred for unknown reasons, the Economic Times report added. Sitharaman is likely to be briefed by her team later this month regarding ongoing developments in the cryptocurrency space.

Sony Interactive Entertainment recently published a patent released this month that could let PlayStation users bet on competitive esports events with Bitcoin. While the patent, titled “E-sports Betting Platform," doesn’t reference PlayStation exclusively, it does call out Bitcoin and crypto as a potential tool for wagers.

The patent was filed in 2019 but was only recently published. As with many patents, its future viability or likelihood to be implemented is indeterminable. The legalization of sports gambling continues to expand on a state-by-state basis in the US, with now 21 states allowing sports betting.

The implementation of the patent is speculative but could include machine learning to derive odds. Patent language also suggests the ability to bet against friends or against other spectators. Conventional stick-and-ball sports have seen increased sports betting companies integrate into traditional broadcasts. Sony’s patent verbiage suggests something similar here too, such as a “user interface overlay that could appear in the broadcast so that the user can place their bets.”

The Bitcoin price will likely break below the $35,500 support barrier. If that happens, the 2021 yearly open of $28,250 will be tested. A break below that could be very dangerous.