Bitcoin price surged from $33,150 to $36,000 as the buyers stayed in control of the market for three consecutive days. As the buyers make a charge towards the $37,000-level, let’s take a closer look and see what’s going on behind the scenes with technical analysis.

During this recent Bitcoin price surge, the BTC bulls managed to flip the 20-day SMA from resistance to support. The relative strength index (RSI) is still hovering inside the neutral zone, which means that the BTC price still has sufficient room for growth.

When we see the 4-hour Bitcoin price chart, there are three bullish signals that we can look into.

The price of the Grayscale Bitcoin Trust (GBTC) recently hit its lowest since April 2019, according to CryptoQuant. Despite Grayscale’s massive Bitcoin inflows, BTC/USD has not continued to gain.

The Trust’s purchase premium has been hovering around $6.50, having previously been as high as $40. According to a popular general theory, this coincides with BTC’s meandering price direction as large premiums equal large upside moves for Bitcoin.

An article from Hackernoon magazine (in December) explained this phenomenon as being tied to releases of GBTC shares, subject to a customary lock-up. Once they are released, Bitcoin tends to surge as customers put their profits back into the asset, while the time preceding such events corresponds to a lack of price action.

The article correctly predicted the BTC price behaviour for the second half of January. It summarised:

What's important to know is once these higher prices and premiums are realized after an unlocking, price goes on to consolidate. This lets the premium shrink again before its next unlocking event.

This voids enables premiums to shrink again just like the nine times before. And it'll keep shrinking until the next unlocking. Because of this I expect price to either consolidate or sag.

There is surging anticipation in the crypto community about continuing the Bitcoin bull run as the next unlocking is set for today (February 3). Meanwhile, Grayscale continues to expand its offerings as institutional interest broadly shows no signs of slowing investments. The company reopened its Ethereum Trust after being closed since December.

As a result of the recent Bitcoin outflows from Coinbase, CryptoQuant CEO Ki Young Ju is expecting a BTC bull rally to take place soon. The data analyst company pointed to over 15,000 Bitcoin (worth around $515 million) being taken out from Coinbase. Based on some factors, Ki Young Ju believes this is likely a part of over-the-counter (OTC) transactions from institutional investors. 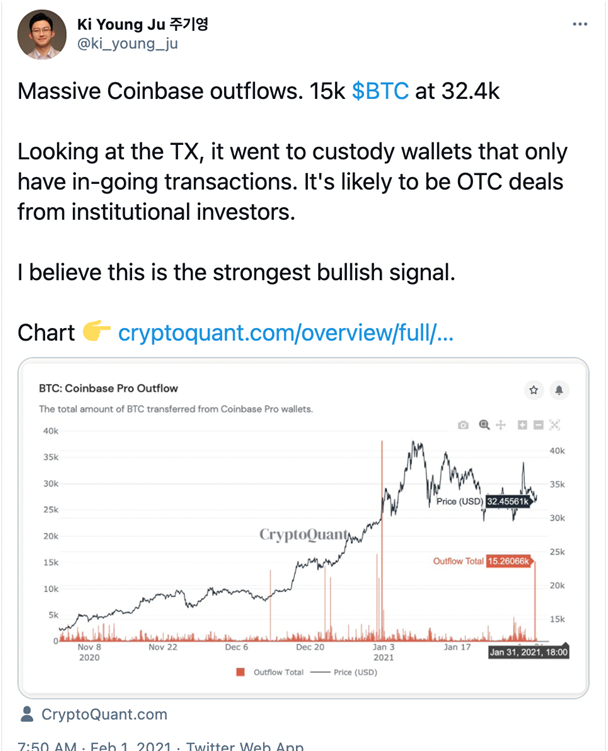 According to Ki Young Ju, the Coinbase outflows are a bullish sign for the crypto market as it shows that investors are moving their tokens to storage. If investors are moving significant amounts of BTC to storage (such as cold wallets), it means that they see the flagship crypto to be worthwhile holding on to rather than selling. With BTC in cold wallets, it won’t be traded or exchanged.

“We never know the OTC transaction volume under the hood by institutional investors, but there are on-chain indicators to estimate OTC deals.  And based on these indicators, large OTC deals are still going on. Potentially that institutions are continuing to buy BTC.”

Tokens Transferred is the number of Bitcoins transferred on the network. If this value goes up and the fund flow ratio for all exchanges goes down, it implies that huge OTC deals are on-going… This $BTC bull-run never stops as long as these OTC indicators keep saying institutional-buying.

Micheal Saylor, the CEO of MicroStrategy, said that the company’s “Bitcoin Educational Conference” has attracted an impressive number of CEOs. Saylor noted that attendees would benefit from MicroStrategy’s playbook on how to employ the BTC Monetary Network.

The conference (scheduled to take place in two parts on February 3rd and 4th) aims to educate enterprises on how they can take advantage of BTC investments or make it their primary treasury reserve asset. Some of the well-known corporations presenting at the conference include Fidelity Digital Asset Services, Binance, Coinbase, Grayscale, Kraken and more.

Saylor took to Twitter to highlight the tremendous interest received from executives.

“I have never seen so many CEOs sign up to attend one of our events. Send yours, or come join our sessions & report back to your team. Every company can benefit from plugging into the #Bitcoin Monetary Network.”

Saylor confirmed the increasing interest from executives in the crypto sector in a recent podcast, as per a CryptoPotato report. He noted that shortly after MicroStrategy announced the purchase of over $1 billion worth of BTC, he was contacted by various CEOs for further information.

Bitcoin price currently has the positive momentum required to surge past the $37,200 resistance barrier and break into the $38,000 psychological level.