Bitcoin price rose from $48,500 to $53,000, gaining over $5,000 in overall valuation in the last 5 days. During this rise, the BTC managed to flip the 20-day SMA from resistance to support. Prior to this, the premier cryptocurrency has been trending horizontally below the 20-day SMA.

With the buyers in full control, the Bitcoin price managed to cross over the $50,000, $51,000, and 52,000 psychological levels every easily over the last three days. The relative strength index (RSI) shows that the asset is no longer overpriced, which gives BTC more room to grow.

But where will the Bitcoin price grow? IntoTheBlock’s IOMAP shows a moderate resistance level at $56,000. As per this indicator, 144,000 addresses had previously purchased 78,600 BTC tokens here. 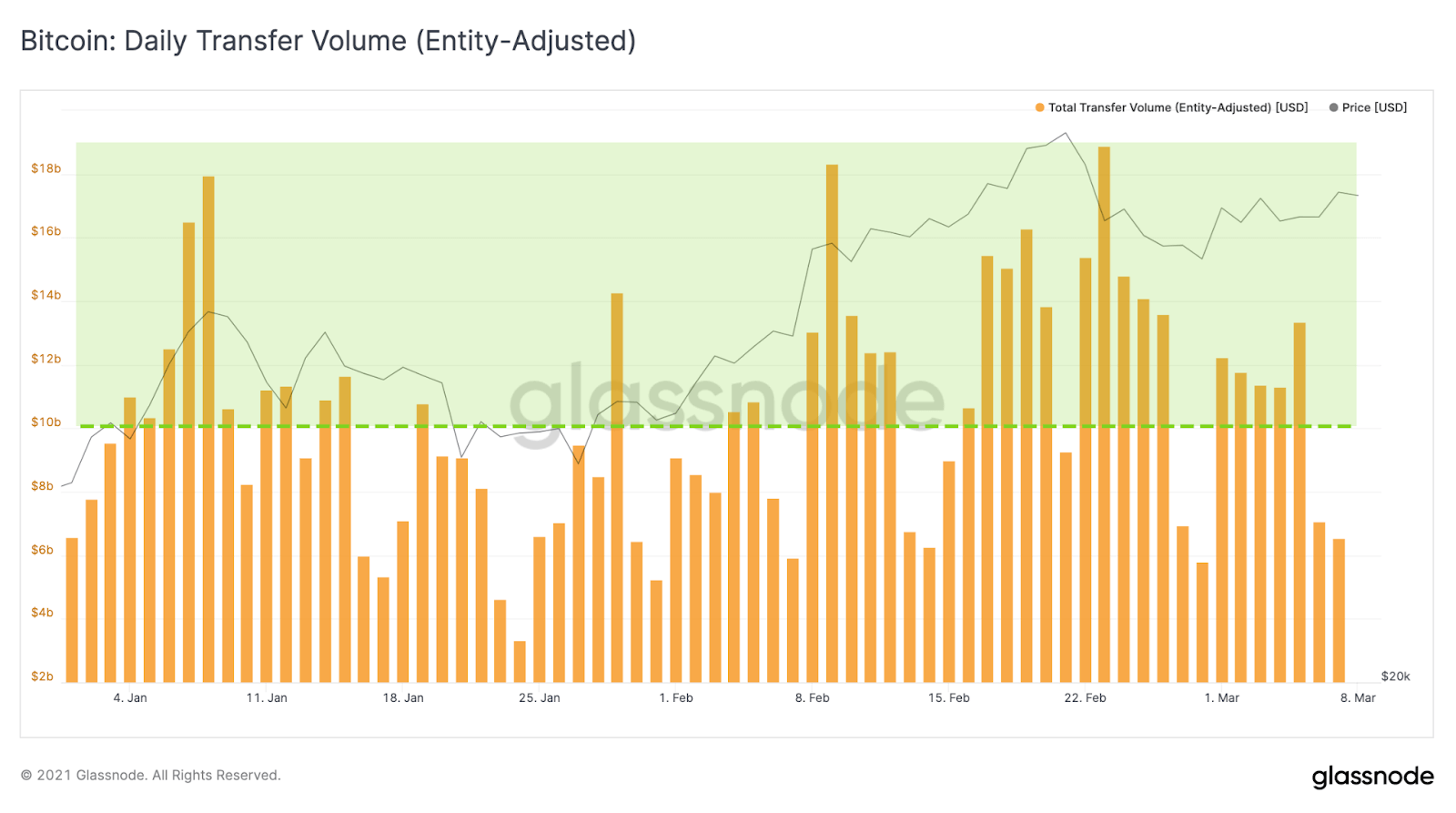 As per Glassnode, the amount of Bitcoin changing hands on a daily basis is still very high. Glassnode tweeted the following:

“In 2021, the #Bitcoin network settles on average more than $10 billion (!) USD every day. This number refers to BTC actually changing hands – it adjusts for change volume and transactions between addresses of a single network participant.”

George Ball, the chairman of Sanders Morris Harris, said that cryptocurrencies are a hedge against currency “debasement.” He added that virtual assets are attractive as a small part of portfolios.

In a recent interview with Yahoo Finance, Ball shared his thoughts on Bitcoin. He also described two main reasons why wealthy individuals and institutional investors are increasingly looking at crypto investments.

Explaining why cryptocurrencies are an effective hedge against the debasement of fiat currencies, Ball said:

Longer-term, if inflation is back, if we start to debase the currency badly, then the cryptocurrencies have a great deal of allure.

Just recently, Washington voted on a $1.9 trillion stimulus package, which was passed shortly after. Many times in the past, several analysts have warned of currency debasement risk from the passage of such huge stimulus relief packages.

Ball believes cryptocurrencies are “attractive” as a “small part” of any portfolio. He said:

With cryptocurrencies, I think there is a fundamental hydra-headed shift that makes them attractive as a part, a small part, of almost any portfolio.

The chairman further believes that an increase in retail traders who speculate on stocks could push crypto prices higher.

If the investors are losing money in common stocks, but still want to speculate, then the cryptocurrencies I think will be the logical and likely next focus of their combined, individually small, but combined very large dollars.

Ball had been a Bitcoin sceptic until last August when he told investors that it was time to buy Bitcoin. He noted that he’d “always been a blockchain, cryptocurrency and Bitcoin opponent.” In his opinion, the government cannot stimulate markets forever and the liquidity flood will end.

Bitcoin price is likely going to touch $56,000 and break past this level.