Following a Bitcoin price correction that took the premier cryptocurrency below the $48,000-level to $47,050, the buyers have come back fighting to take BTC back above $48,500. As per celebrated journalist Joseph Young, this is a critical victory since the buyers can use this level to aim for $50,000.

“Here's what I expect in the market. $48,000 is the key level for Bitcoin. If it stays above it as support, I think it goes to $56k~$60k. Continue to reject $48k will likely result in short-term consolidation/pullback to reach lower liquidity. Let's pray for $48k+.”

Since January 28, the Bitcoin price has rallied from $30,300 to $48,500, gaining around $18,200 in its overall valuation. As things stand, the asset is still overpriced as seen by the relative strength index (RSI).

However, as the IOMAP tells us, the Bitcoin price is hovering above strong support levels. These levels are robust enough to absorb a tremendous amount of selling pressure. The closest strong support wall is at the $48,000-level, wherein 590,000 addresses had previously purchased 222,000 BTC tokens.

Looking at the 4-hour Bitcoin chart, there are two bullish signals:

Bitcoin Development Activity On The Rise 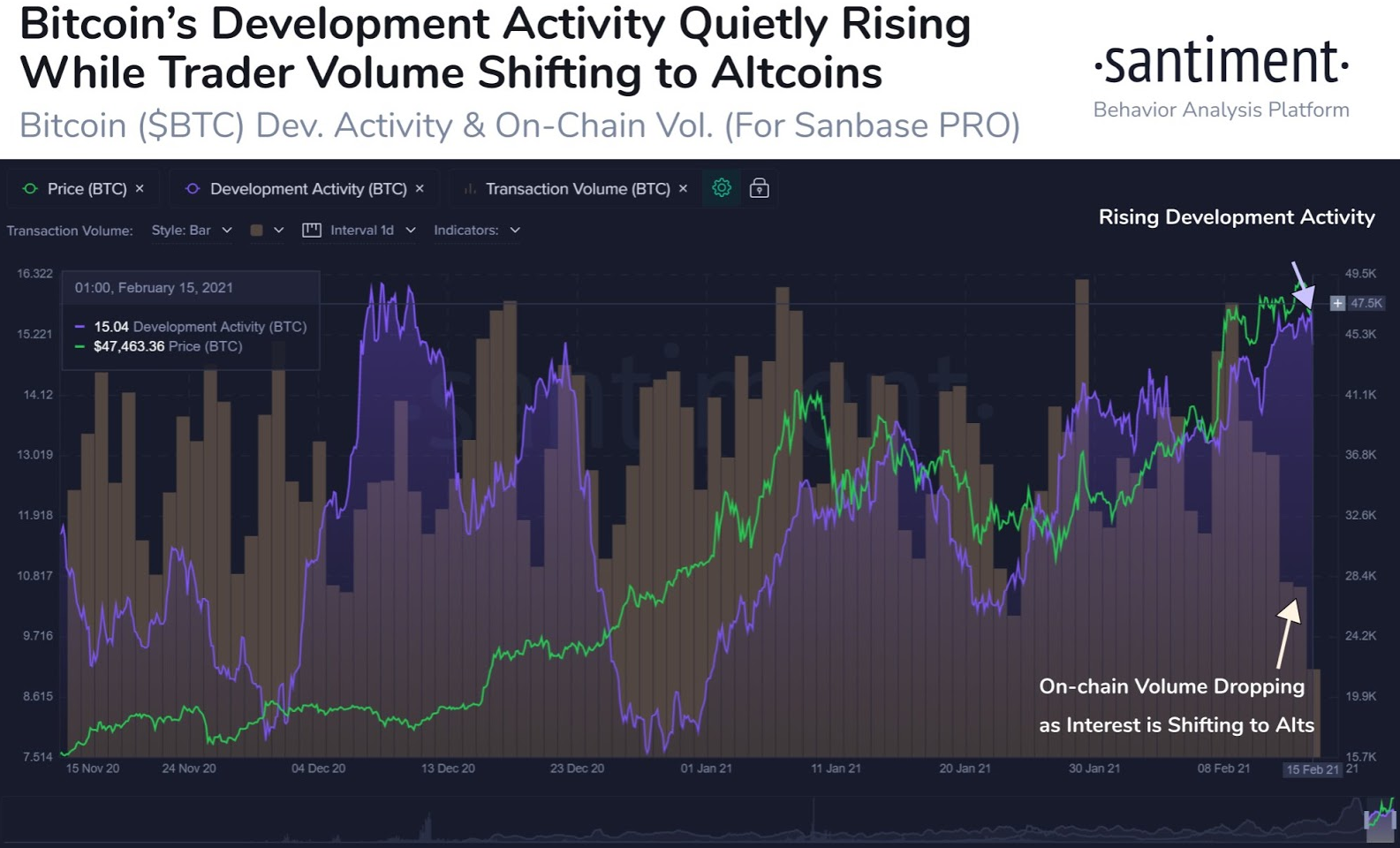 Santiment, an on-chain analysis company, has shared the above image along with the following tweet:

“#Bitcoin continues to range between $45k and $49k these past five days. And while #altcoin markets heat up, $BTC's development activity has quietly risen to 2-month high levels. On-chain volume is also dropping, as traders chase volatility in #alts.”

An increasing amount of development activity is usually a good sign for the Bitcoin price in the long run.

Tesla’s recent revelation about $1.5 billion Bitcoin investment has pushed the asset to new all-time highs. The news has also created an unprecedented wave of activity among new Bitcoin miners, causing a surge in demand for mining hardware.

Demand for Bitcoin mining machinery has been increasing steadily, with new models already sold out. The second-hand hardware market also appears to be busier than ever. According to a Forkast report, Nangeng Zhang, the CEO of Canaan, one of the biggest crypto-mining rig manufacturers, said:

[Elon] Musk’s views largely represent the positive attitude of the tech elite towards bitcoin. [The Tesla news] has attracted a large number of institutions, publicly-listed companies, and funds to increase their bitcoin holdings and even enter the crypto mining industry themselves.

Bitcoin’s 2020 bull run put further pressure on BTC mining hardware manufacturers that were already facing production challenges from the pandemic. Companies like Canaan and Bitmain are struggling to meet the growing demand for the hardware.

Bitmain is completely sold out of equipment through to August this year, even after nearly doubling the price of some systems. Last November, Bitmain’s Antminer S19 Pro reportedly sold for $1,897 and now, the same machine costs $3,769 - a 98% increase.

Jiang Zhuoer, the CEO of BTC.TOP, one of China’s major mining pools said:

In the last three months, the sales of our “joint mining” services have been very popular, and each batch of mining machines has been sold out.

A new crypto theory has surfaced, which claims that Satoshi Nakomoto, the mysterious founder of Bitcoin, left multiple clues to unlocking his BTC fortune (estimated to be worth billions). According to some posts published on Bitcointalk, traders have started to look for clues that may lead to the discovery of Nakamoto’s private keys. This would unlock the hundreds of thousands of BTC mined in the initial days of the crypto asset, as per the theory.

The theory is based upon research by Sergio Demian Lerner published in 2013, which showed a statistical imbalance in the blocks mined by Nakomoto. Lerner speculated that the uneven distribution may have been done deliberately by the founder to leave behind a message. An excerpt from the research report reads:

Satoshi left a message fingerprinted in the nonces. A message for us to see in a distant future.

Bitcointalk traders have now taken the theory further, arguing that Nakomoto’s early block rewards did not constitute random mining. Instead, in their opinion, they may represent a roadmap for the private keys to his bitcoin fortune.

If proven true, the clues would lead to the unlocking of wallets containing the creator’s estimated 750,000 mined BTC (worth over $34 billion).

Having claimed the $48,000 support level, the Bitcoin price is on the verge of reaching the $50,000 psychological zone.