Over the last four days, the Bitcoin price has pretty much been moving horizontally above $32,000. The relative strength index (RSI) has also been trending horizontally around 48, which tells us that the bulls and the bears are still fighting for control.

IntoTheBlock’s IOMAP tells us that BTC is currently sitting on top of one healthy support wall at $31,000. Previously, at this level, 469,000 addresses had purchased a little below 344,500 BTC tokens.

Looking at the 4-hour chart, we can see that the 20-bar SMA was on the verge of crossing over the 200-bar SMA to form a bullish cross pattern. However, these two levels have since diverged from each other. Over the last three sessions, BTC has dropped from $34,500 to $32,200, flipping the 20-bar, 50-bar, and 200-bar SMAs from support to resistance.

Crypto Regulation Will Work In Favor Of Bitcoin – MicroStrategy CEO

Saylor said that increased scrutiny will do good and that new rules would accelerate investment into BTC.

To the extent that we have regulated entities that are dealing in Bitcoin, I think it’s just going to accelerate the stampede of institutional money into Bitcoin.

Saylor noted that most investors were already purchasing Bitcoin through regulated exchanges, which are mandated to comply with strict Anti-Money Laundering (AML) and Know Your Customer (KYC) laws. He said pressure from governments would prove to be beneficial for the flagship cryptocurrency.

US President Joe Biden has signed over 15 executive actions related to various policy areas in just a few days after the inauguration. Some of the newly-enforced changes affect bodies related to the crypto industry.

Heath Tarbert will soon step down from his role as Chair of the Commodity Futures Trading Commission (CFTC). Chris Brummer is the leading candidate as Tarbert’s replacement. Brummer is known for his research related to digital technology, international finance, and cryptocurrencies. The official appointment news is expected shortly.

The Biden administration has named commissioner Allison Lee as acting Chair of the US Securities and Commission (SEC). Ripple had expected the possibility of Gary Gensler taking the SEC Chair. He is an MIT blockchain professor. 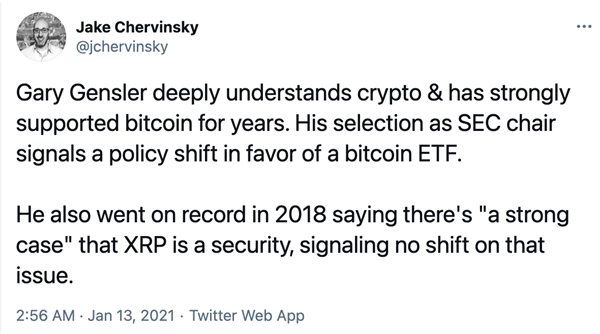 Lee, however, has no specific experience directly related to digital assets. Following the news of her placement as acting SEC Chair, she stated:

During my time as Commissioner, I have focused on climate and sustainability, and those issues will continue to be a priority for me.

The CFTC appointment will represent a positive move for Bitcoin and other cryptocurrencies. But the SEC appointment at this point shows no positive or negative impact.

Since the Bitcoin price is stuck between strong levels, we can expect it to continue consolidation above the $32,000 zone.