Over the last two days, not only has Bitcoin flipped the 20-day SMA from resistance to support, but they have flipped the parabolic SAR from bearish to bullish too. The relative strength index (RSI) is hovering in the neutral zone, giving it more room to grow.

As things stand, the Bitcoin price has a moderate-to-strong resistance barrier at $54,000. Previously, at this level, 167,000 addresses purchased 134,000 BTC tokens. The Bitcoin bulls should gain enough momentum to take down these levels and reach $55,000 at the very least.

Willy Woo shared the glassnode chart above and stated that the number of Bitcoin users are increasing by the day.

“The increase in Bitcoin users visible on its blockchain per day. Retail investors arrived in Jan. Like prior cycles, I expect this peak to top out higher than the ones before it. Gives you an idea how this bull market is just warming up.” 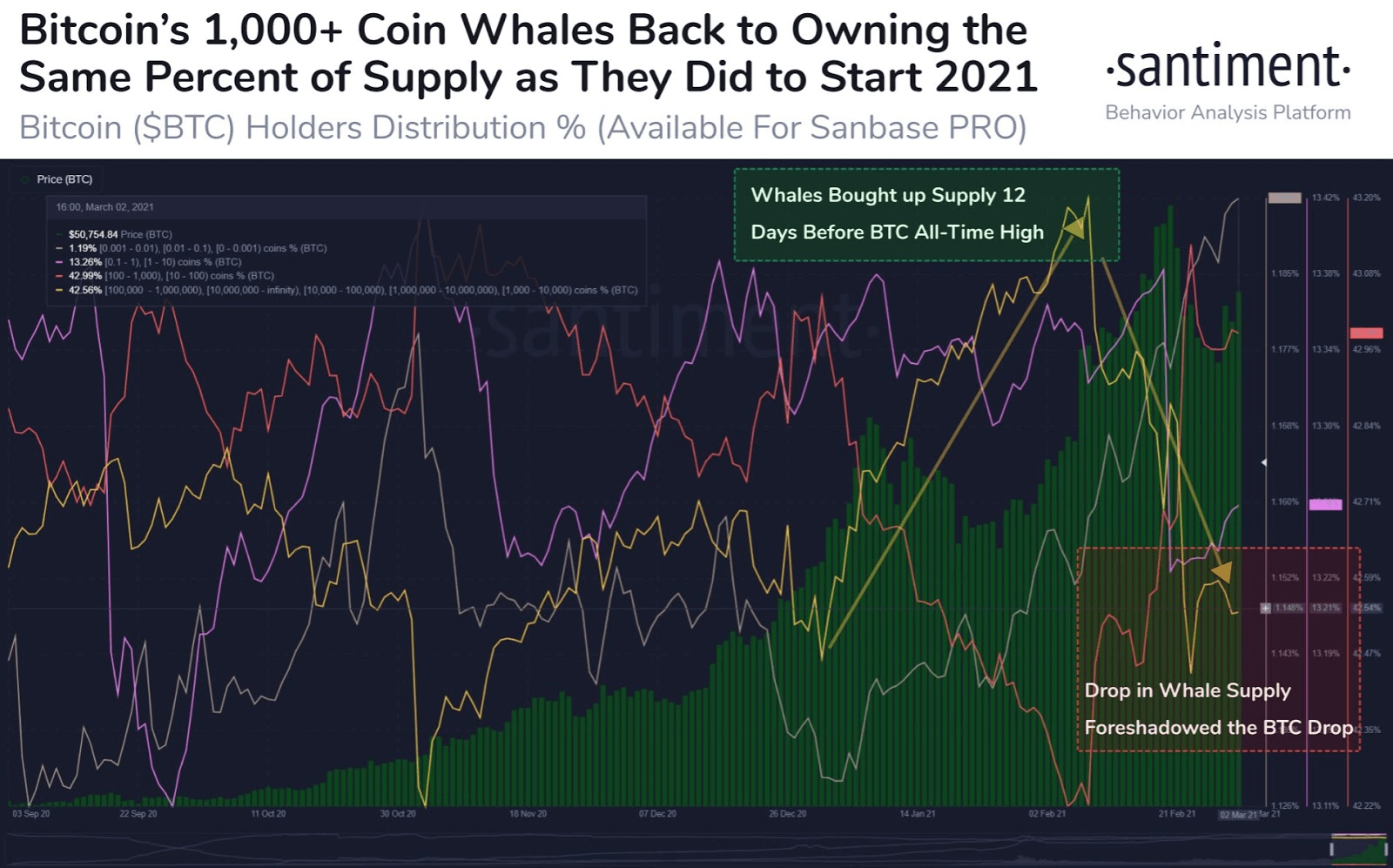 Santiment also shared the above chart and noted that the whales (at least 1,000 BTC) are back holding the same number of BTC as they did to start 2021.

In a recent interview, tech investor Tim Draper shared his views on Bitcoin. Draper said that the flagship crypto will "get quicker and more efficient and [it] will compound." The entrepreneur made this remark after his observation that Bitcoin's current market capitalization is now sitting at almost $1 trillion.

Draper also discussed the possibility of Netflix being the next Fortune 500 company to invest in Bitcoin and other cryptocurrencies. He added that institutions are increasingly viewing Bitcoin as a hedge against inflation and the obsolescence of fiat currencies.

Draper is a co-founder of Draper Fisher Jurvetson, an investment company for early-stage tech startups. He is also known as one of the main investors of the Tezos project. The Tezos project raised an estimated $232 million during its token sale back in July 2017.

Last year, Draper said that "[...] the DeFi world is almost as technologically advanced as the dollar, and when it is, there will be no one who will want to accept politically manipulable currencies like dollars anymore.”

CBOE filed a Form 19b-4 Monday, formally announcing its intention to list and trade shares of the VanEck Bitcoin Trust. The form kicks off the legal review period that could lead to the first bitcoin ETF in the U.S.

The SEC has been very reluctant in approving a regulated ETF so far. The Gemini Exchange and Van Eck had repeatedly presented various Bitcoin ETF proposals in the past but failed to seek approval. Once approved, an ETF could potentially shoot up institutional investor involvement in Bitcoin.

The chances of CBOE getting a Bitcoin ETF approved are higher now due to two reasons. First, the Ontario Securities Commission (OSC) greenlit a Bitcoin ETF application from Purpose Investments Inc recently. Secondly, the current SEC chair, Gary Gensler, is known to be crypto-friendly.

Commenting on the overall positive sentiment in their statement, CBOE said:

While a bitcoin ETF does not currently trade within the U.S., Canadian regulators have approved multiple bitcoin ETFs over the past month, with one seeing close to $1 billion invested by retail traders within its first few days.

Bloomberg ETF analyst Eric Balchunas also noted that the approval of a Canadian ETF is “likely a signal” that the SEC will approve one in the US this year as well.

Shark Tank star Kevin O'Leary has recently surprised the crypto community by investing 3% of his net worth into Bitcoin. In a recent interview with Stansberry Research, O’Leary mentioned that Bitcoin reaching $100,000 doesn’t seem too crazy to him anymore. He went on to call the top crypto “the U.S. dollar” of cryptocurrencies.

He also suggested that the market cap of the flagship coin could ultimately reach $20 trillion.

If it became, let’s say, I don’t know, $20 trillion of value, okay? You would be basically very very stable in my view because you would be being held by people and institutions that are holding it for, again, to hedge against inflation or just storage of value.

The Canadian star appears to be picky about what coins actually end up in his stash. O'Leary said that he wants to steer clear of Bitcoin mined in China.

I have the same issue with Bitcoin. I do not want to own Bitcoins mined in China...because I’m very unhappy with my relationship with the Chinese government regarding my investments there, so I choose not to invest in it.

He also mentioned that he doesn’t want to touch Bitcoins that have a bad provenance, i.e., “blood” coins. He claimed that “the most important thing” is to mine Bitcoin himself.

No one can say to me that you basically mined and found it from somewhere where they were wasting energy or they were not carbon neutral, or they came from a country that’s under sanction. This is a big deal for me, and plenty of other shareholders too.

The multimillionaire stated that he’s going to mine Bitcoin in places like Iceland, Canada and Denmark where green energy is prioritized.

I think that my plan is one that anybody would do when they care about the environment.

A recent survey by Finder has shown that one in five Britons currently own cryptocurrency. This is a steep increase in UK crypto holders since 2018. Finder surveyed a total of 2000 people between February 12 and 15th, 2021.

19% of the respondents said they currently held cryptocurrency. In 2018, a similar survey was conducted by the Financial Conduct Authority, which revealed that around 3% of the UK held Cryptocurrencies. This marks an increase of 558% with 18-34-year-olds being the largest demographic of crypto holders.

While the UK does not have clear regulation regarding the holding, trading and investment of digital currencies, a crypto assets task force was set up in 2018, which concluded that:

DLT has the potential to deliver significant benefits in both financial services and other sectors, and all three authorities will continue to support its development.HM Treasury, the FCA and the Bank of England will take action to mitigate the risks that cryptoassets pose to consumers and market integrity; to prevent the use of cryptoassets for illicit activity; to guard against threats to financial stability that could emerge in the future; and to encourage responsible development of legitimate DLT and cryptoasset-related activity in the UK.

The task force’s stance on cryptocurrency is less fearful of crypto than many other governing bodies around the world. With an increase in adoption, the UK will surely have to regulate cryptocurrencies if it wants to keep up with the demand from its citizens.