Bitcoin price’s correction continues as it strings together a hattrick of bearish days. Yesterday, BTC managed to flip the 20-day SMA from support to resistance. Over the past week, Bitcoin price fell from $39,200 to $34,750 by 11.35%.

The relative strength index (RSI) is presently trending around 53.50, and it still has more space to drop before the asset gets underpriced. IntoTheBlock’s IOMAP shows that the price could drop to $31,500 before it encounters moderate-to-strong support.

On the upside, there is a very robust resistance barrier at $36,500, which coincides with the 20-bar and 50-bar SMAs in the 4-hour chart. This barrier is strong to absorb a considerable amount of buying pressure. The MACD in this chart shows increasing bearish momentum, which adds further credence to our overall bearish hypothesis.

However, despite all this, the overall outlook of Bitcoin price still looks very positive.

Popular analyst Willy Woo recently said that he believes the price of Bitcoin will hit $200,000. His prediction is based on a recent upward movement on the top capitalization of his price model. The analyst took to Twitter to note that a $100,000 price target is “too low,” and that the flagship cryptocurrency is instead “on track for $200k minimum.” 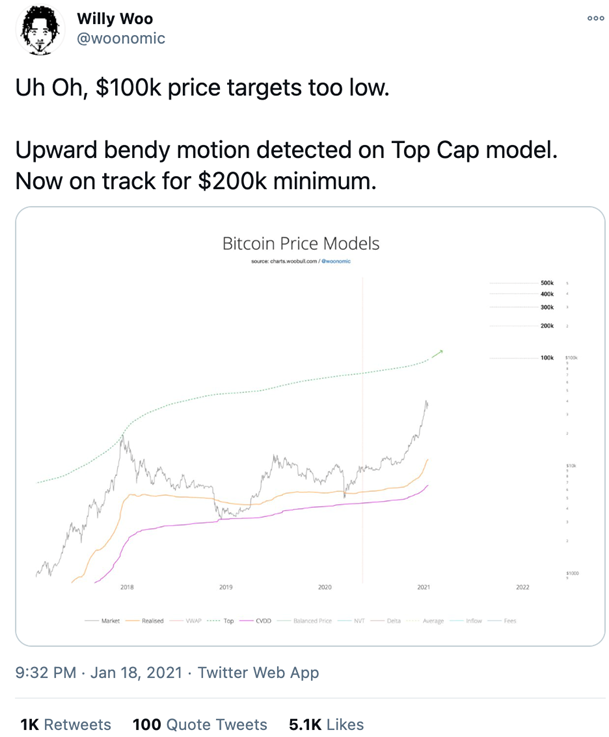 Historically, Bitcoin’s market cap has “matched market tops.” This means that the coin could hit $200,000 and then correct prominently. In 2013, Bitcoin reached $230 before correcting, matching the top cap indicator. Later that year, BTC was trading at $1,000 near the indicator as well. The next matched market top came in 2017 when the asset hit a high of around $20,000 and the metric was matching it at $20,300.

Woo also included the Cumulative Value Days Destroyed (CVDD) metric as an indicator. The CVDD is currently standing at $6,600, which implies that if BTC enters a bear market anytime soon, it would bottom at around $6,600.

It looks like the Bitcoin price is on the course of testing the $31,500 support line. The buyers will need to defend this level with everything they have. A further break here could be catastrophic since the Bitcoin price will then crash to the 50-day SMA ($28,000).