Bitcoin Price Prediction: BTC Dips Below $52,000 Even As Institutions Keep Flowing In

From February 1 to February 17, the Bitcoin price rose from $33,000 to $52,000, gaining nearly $20,000 in its overall valuation. However, BTC price has dipped for a bit over the last two days. Let’s take a closer look with technical analysis.

This recent rise in Bitcoin price was robust enough to push the RSI into the overbought zone. However, bearish correction over the last two days pushed BTC back into the neutral zone. This seems more like a temporary hiccup than a new trend.

The MACD in the 4-hour Bitcoin price chart has turned bearish, so a further correction could be in store. As of now, BTC has found support at the 20-bar SMA.

Motley Fool To Buy $5M Of Bitcoin For Its “10x Potential”

Popular financial and investing advice firm The Motley Fool recently announced that they are investing $5 million in Bitcoin.

Minutes after the announcement, Bitcoin price reached $52,400 - a new all-time high. The company cited three reasons for its investment. First, it said that Bitcoin is a better store of value when compared to gold in the long-term.

Second, Bitcoin could become a medium for “transactions, as/if pricing stabilizes in the decade ahead.” Lastly, the company mentioned that it believes BTC can act as a productive hedge against inflation.

The Motley Fool went on to say that it believes “Bitcoin can play a role within a diversified portfolio built with a focus on the long term” and that it plans to hold this Bitcoin investment for “many years.”

In a recent article published, the firm said that it had decided to recommend Bitcoin as part of its “real-money 10X portfolio”, which is focused on finding investment opportunities with the potential to increase 10x in value within the next five to ten years. It further added that it will be separately purchasing Bitcoin for its balance sheets

We will not only wait for all of our members in 10X to be able to buy before we buy our 10X allocation, but we’re also giving all Motley Fool members a chance to review this guidance before we separately stake $5 million of The Motley Fool’s own capital.

BlackRock To Deep Into BTC

Rick Rieder, the Chief Investment Manager of BlackRock - the largest asset manager in the world - said that the firm is venturing into Bitcoin investments. According to Rieder, the crypto market is ready for the entrance of new players.

We’ve started to dabble a bit in it. My sense is the technology has evolved and regulations have evolved to the point where a number of people feel it should be part of the portfolio.

Notably, many countries are increasingly regulating crypto taxations and focusing on the mitigation of crime. This has presumably encouraged new crypto investments. Rieder also noted that investing in digital assets is very practical currently because many traditional assets are no longer as attractive to investors.

In its filing with the Securities and Exchange Commission earlier this year, BlackRock implied that Bitcoin derivatives would be added to two of its funds. These include BlackRock Global Allcoation Fund, Inc. and BlackRock Funds V.

In the past, many prominent members of BlackRock management have also spoken positively about BTC. Rieder had also praised the crypto asset, implying that it could overtake gold.

Do I think it is a durable mechanism that, you know, that I think could take the place of gold to a large extent? Yeah, I do, because it’s so much more functional than passing a bar of gold around.

19% Of PrivateFly’s Tickets Are Bought In Bitcoin

PrivateFly, a UK-based charter carrier, recently said that 19% of its annual revenues were generated from the sale of tickets via Bitcoin. The company said that BTC activity increased in the past month as prices of the coin moved significantly upwards. 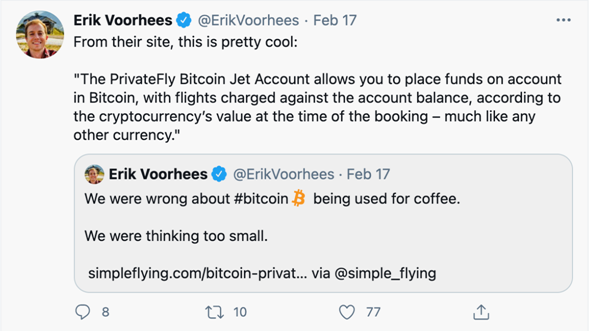 PrivateFly began offering the asset as a payment option back in 2014 on a flight from Belgium to France. The company said that 12% of all flight tickets booked in December 2020 were paid for using Bitcoin. January 2021 saw the sales increase slightly, with 13% of all tickets sold via BTC. For reference, the asset accounted for only 2% of ticket purchases previously.

The firm has rolled out a new membership program that allows travellers to place their Bitcoin in an account and be charged the fiat value at the time of booking. This will avoid the transfer of extra BTC, the value of which may increase or decrease in the following days. 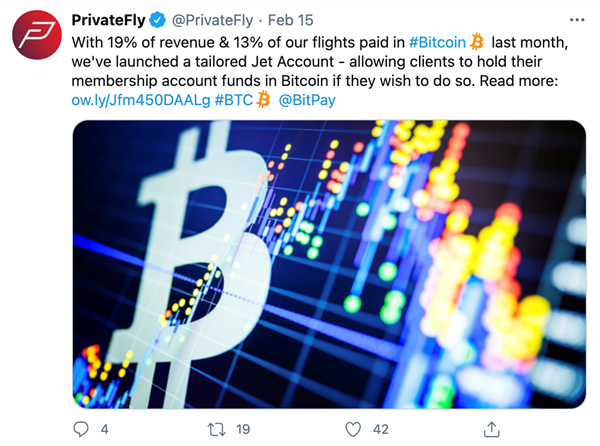 PrivateFly also claimed that the recorded rise in revenues was even more considerable as travellers paying via Bitcoin spent more money on more expensive flights. This suggests a “rich” demographic for the average BTC holder.

We expected Bitcoin price to finish its bearish correction soon and drop a wee bit below $50,000. However, this influx of institutional investors will likely boost BTC to jump to new heights.