Since March 14, the Bitcoin price dropped from $61,000 to $52,700, losing ove $8,000 in its overall valuation. While the market is trying to recover following the Elon Musk and Tesla news, BTC has lost a major support level.

Even if Bitcoin price manages to conquer back the upward trending line, it faces an extremely strong resistance at the 20-day SMA ($55,700). Previously, at this level, 1.1 million addresses had purchased 689,000 BTC tokens

“For the first time since September 2020, #Bitcoin's level of token circulation is not justifying a #bullish divergence based on $BTC's market cap, according to our popular NVT Sansheets model.”

However, the miners are still holding on to their BTC instead of selling them off, as per CryptoQuant. 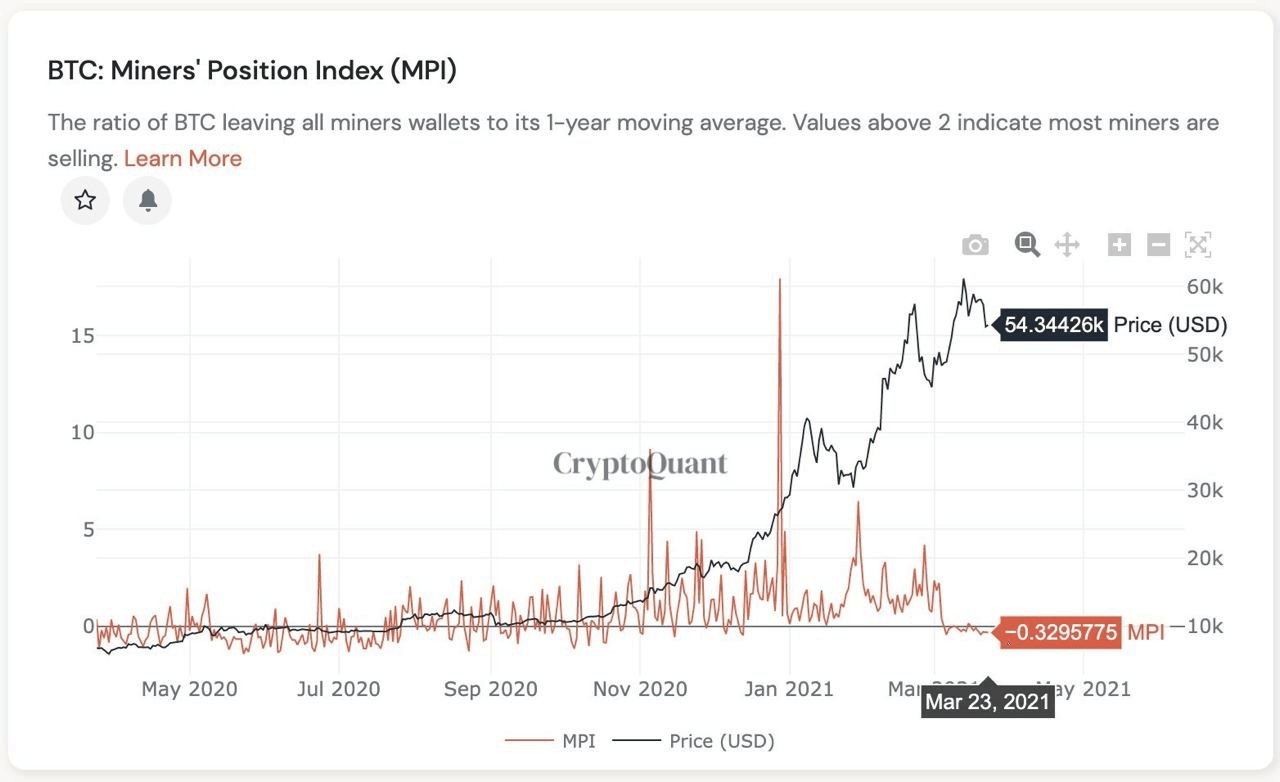 Also note that this Friday, around $6 billion worth of options are going to be liquidated, as per Glassnode. 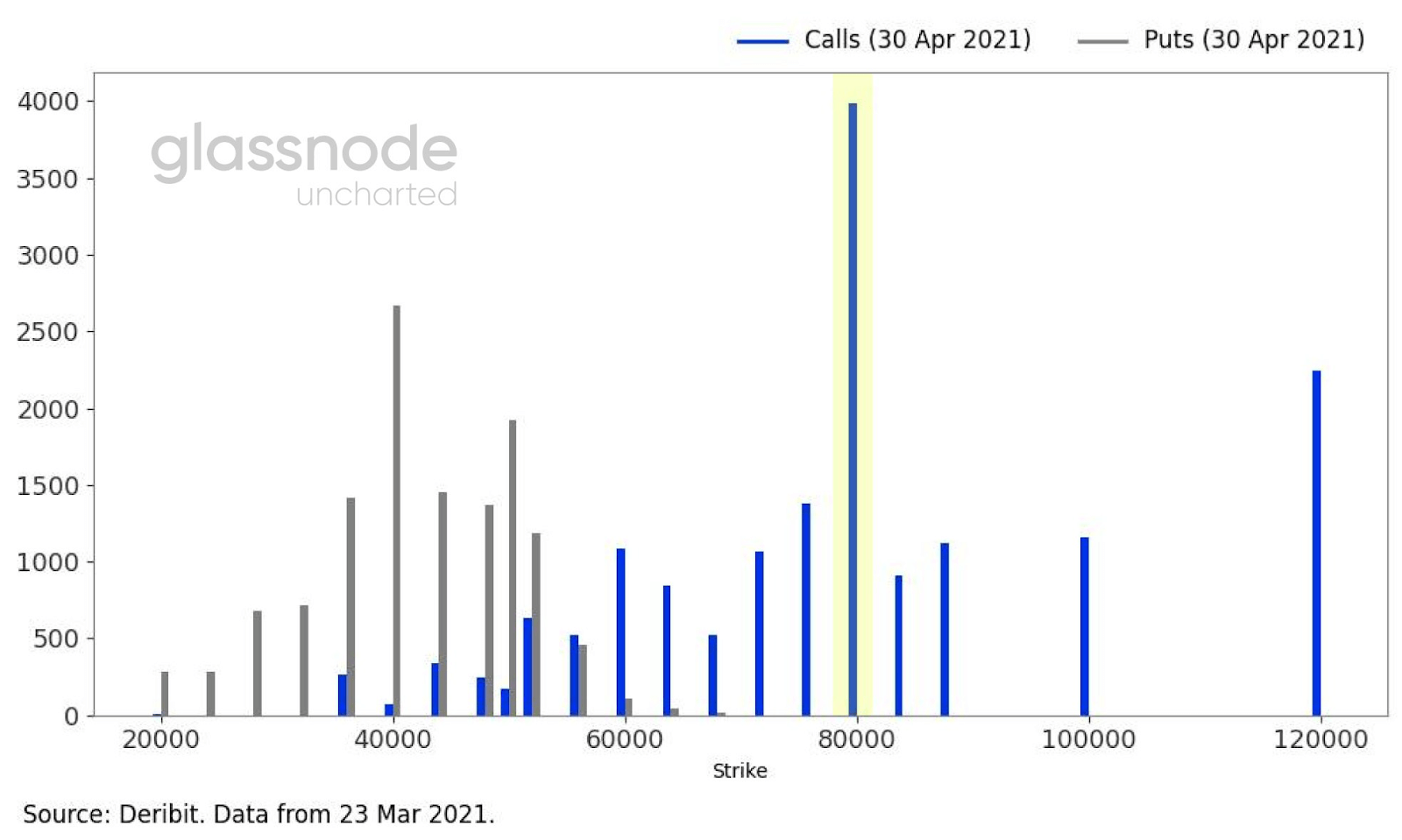 “This Friday $6 billion in options contracts are set to expire. #Bitcoin price expectations for April are high with lots of investors placing their new bets on $80k.”

Financial institutions bought and withdrew 14,600 BTC (roughly $806,723,000) from Coinbase in a single day, according to CryptoQuant. Previously, large Bitcoin amounts were withdrawn from the same exchange when financial institutions stocked up on Bitcoin during the dip on February 27 and March 5. Both times, Bitcoin was below the $50,000 price line. 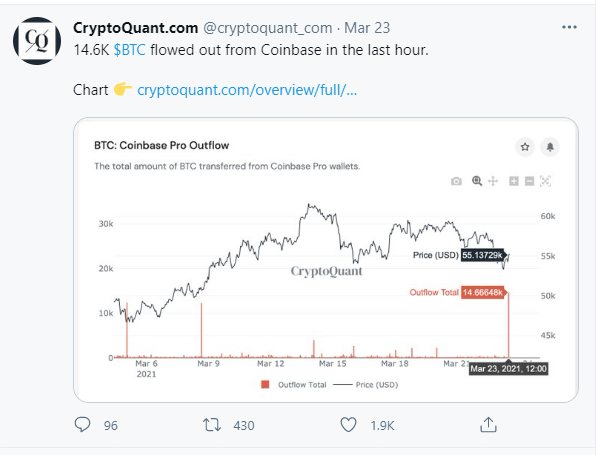 14.6K $BTC flowed out from Coinbase in the last hour.

As per Glassnode data shared by the CEO of Moskovski Capital, cryptocurrency verifiers (widely known as miners) have stopped selling their Bitcoin and have begun to accumulate it instead. Lex Moskovski said that this is happening because they expect a Bitcoin rally soon.

Addresses holding more than 100 BTC have been steadily surging. According to Glassnode's weekly on-chain report, over half of the market currently holds at least 100 Bitcoin. 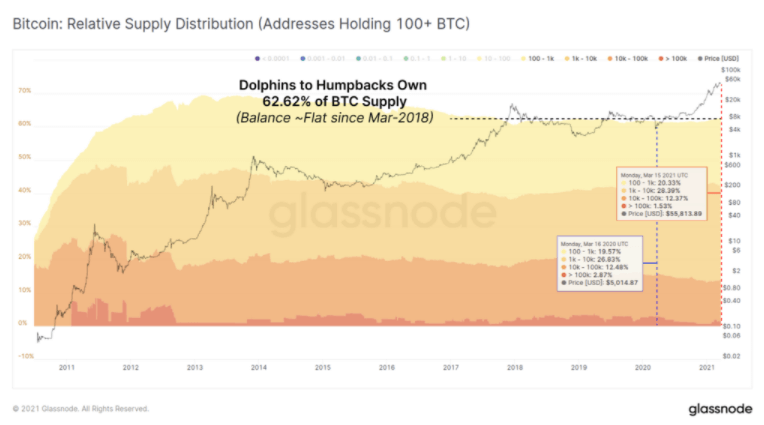 If the trend of whales accumulating Bitcoin has been going on for a year, then it is clear that the bear trend in April last year did not influence whale sentiments when Bitcoin dropped to $8,784 after reaching $10,000 just a few months earlier.

Furthermore, the reserve Risk considers the ratio between the current market price and the cumulative opportunity cost, also known as Hodler bank. In other words, it examines and balances the incentives to sell to the ability of Hodlers who have resisted the urge to sell their coins. These metrics will increase following Bitcoin’s price.

When this happens (usually after a long bull market), Bitcoin whales will start to give in to the need to sell. A new cycle of wealth transfer from long-term holders to new ones would likely be recorded.

Bitcoin price will probably attempt to break past the upward trending line again.