After trending horizontally below $58,000 resistance for the last eight days, it seems like the bears finally took over. Let’s take a closer look at what happened with technical analysis.

Over the last two days, the Bitcoin price crashed from $58,000 to $56,150 – losing almost $2,000 in its overall valuation. During this crash, BTC managed to flip the >2-month upward trending line from support to resistance.

As of now, BTC is sitting on top of the 20-day SMA. A drop to the 50-day SMA will reverse the parabolic SAR from positive to negative. However, it seems like this move is on the cards, since the MACD shows increasing bearish market momentum.

The IOMAP allows us to see why the Bitcoin price has been having such trouble with the $58,000 resistance barrier. Previously, at this level, 688,000 addresses had purchased 1.68 million BTC tokens. 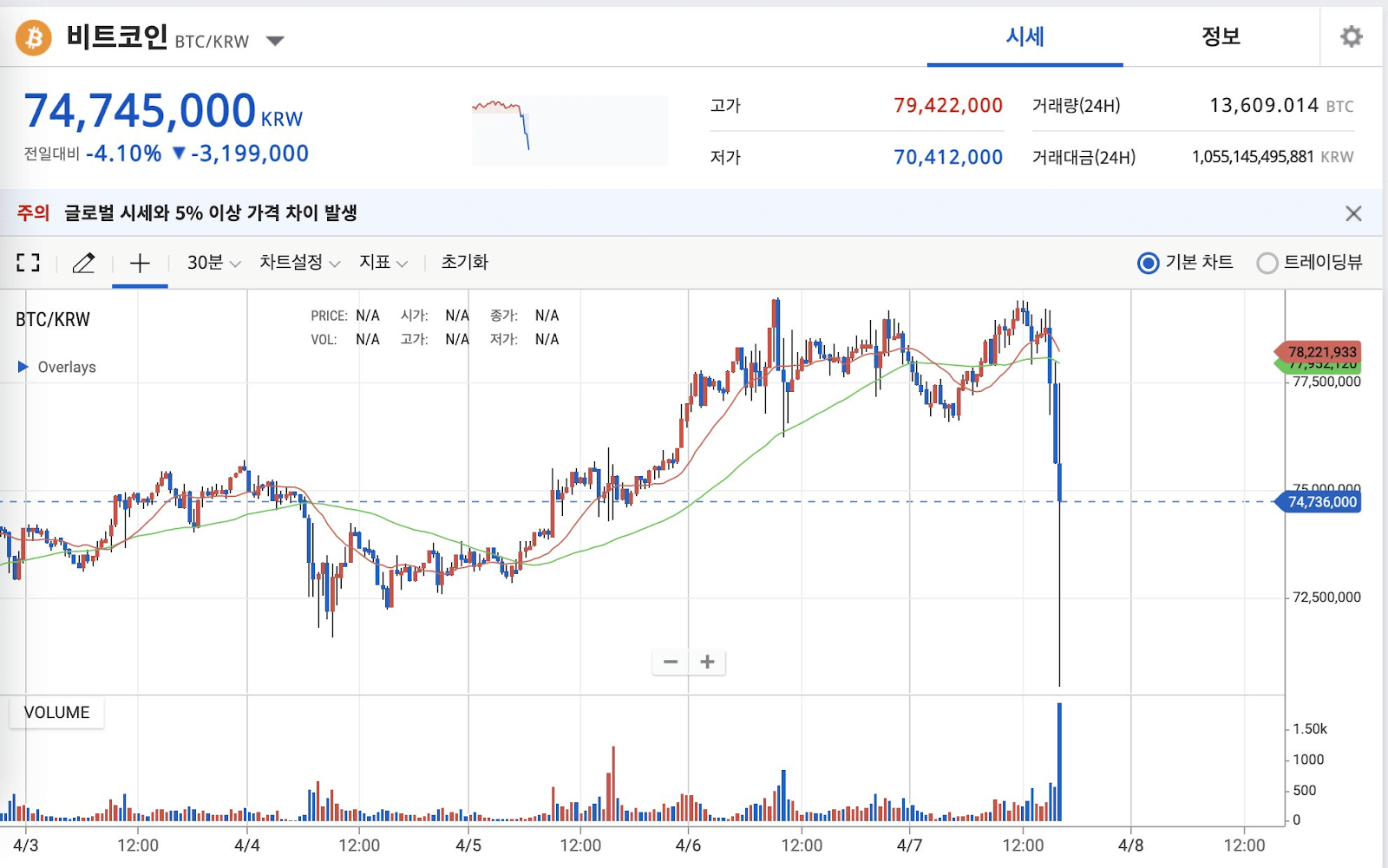 CryptoQuant CEO Ki Young Ju shared the above chart and made this observation about the crash in Bitcoin price’s Kimchi Premium:

“It seems someone finally figured out how to arbitrage this Kimchi premium opportunity. The trading volume in 30min time frame on @upbitglobal , the largest Korean exchange, was bigger than @Binance 's. This drop seems related to Kimchi pullback.”

Bitcoin On-Chain Volume At Its Highest This Year 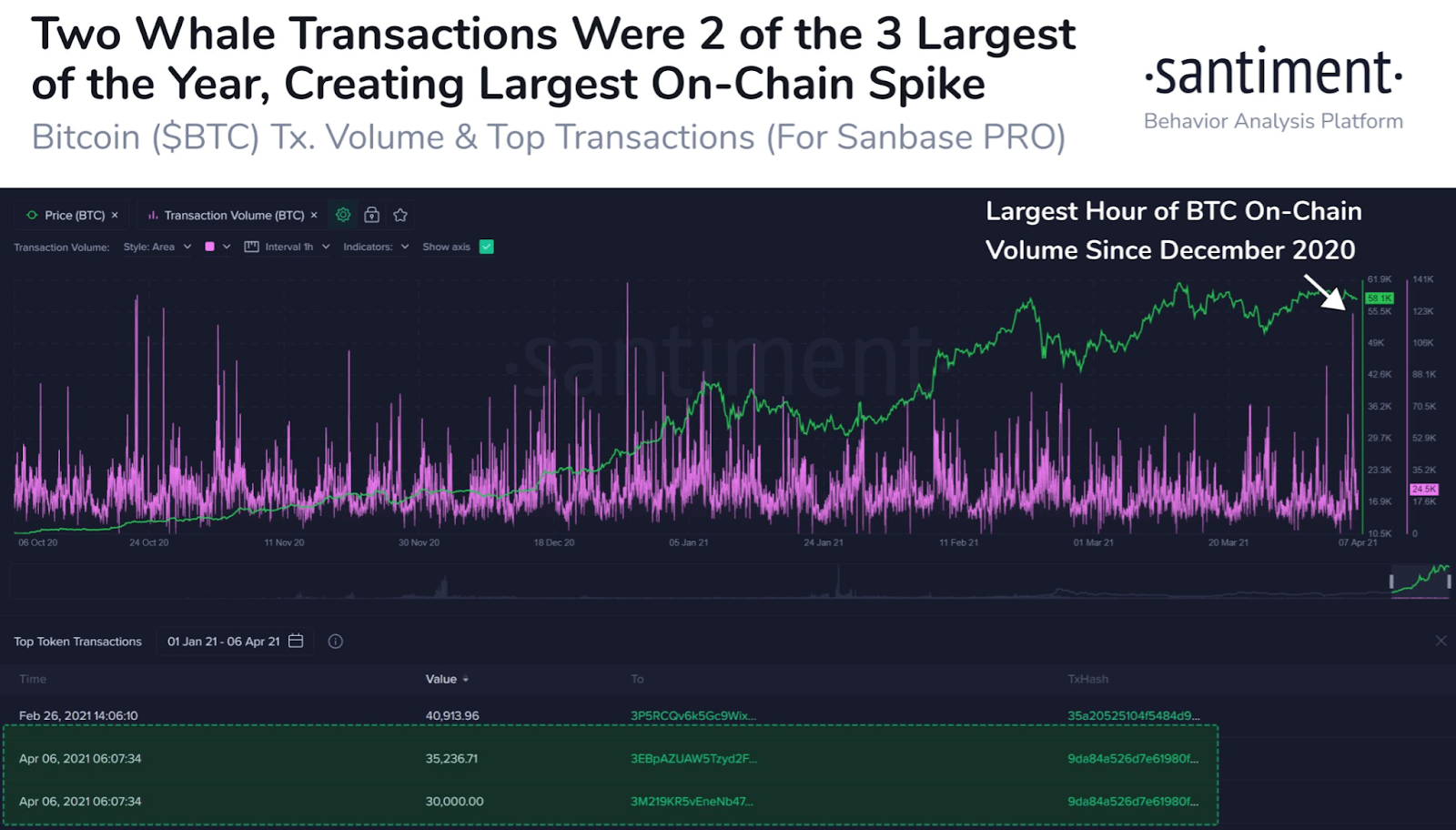 Santiment made another observation on Twitter regarding the recent surge of Bitcoin on-chain volume:

“Yesterday, #Bitcoin had the 2nd and 3rd largest single transactions of the year on its network. 35,237 and 30,000 $BTC, respectively, were transferred as the single largest 1-hour window of on-chain volume of 2021 occurred.

The first transfer was to an address that had held as many as 66,666 $BTC in 2019, but held 0 the last 4 months. The tokens were then moved, and a dormant address received 35,237 tokens on the 2nd transfer, where they are sitting currently.”

Coinbase recently announced its earnings estimates for the first quarter of 2021 and indicated a massive surge in its user base and revenue. The firm saw a 117% increase in monthly transacting users (MTUs) in Q1 2020 compared to the last one. The company’s user base has seen a sharp increase from 2.8 million to 6.1 million.

Coinbase’s revenue reached $1.8 billion in this quarter, marking a near 10x rise from the Q1 last year when it was around $190 million. According to the preliminary estimations for this year’s first quarter, the net profit should be between $730 million and $800 million. The company attributed a part of its quarterly increase to the ongoing bull phase in the crypto space. As Bitcoin and other assets exploded in value since October 2020, it has garnered the attention of retail investors.

The exchange highlighted that as of March 31st, there were $223 billion stored on Coinbase. With the entire market capitalization just short of $2 billion currently, this means that 11.3% of all cryptocurrency assets are held on Coinbase.

We expect meaningful growth in 2021 driven by transaction and custody revenue given the increased institutional interest in the crypto asset class.

The Bitcoin price will likely drop to the 50-day SMA. It will be up to the buyers to ensure that a further drop doesn’t happen.