Bitcoin Price Prediction: BTC Has Dropped By >$7,500 Over The Last 5 Days

Bitcoin has successfully flipped the $38,000 and $35,000 barriers from support to resistance. As of now, the premier cryptocurrency is sitting on top of the 20-day SMA. However, it doesn’t look like this level is going to hold. The MACD has reversed from green to red, which shows that the overall market momentum is bearish.

The 50-bar SMA has crossed over the 20-bar SMA to form the bearish cross pattern in the 4-hour time frame. This could signal that a further drop is in the cards. As per the parabolic SAR, the overall market sentiment is on the verge of reversing from bullish to bearish.

Amid Bitcoin’s sudden correction to a little over $30,000, it appears that many whale addresses are accumulating the asset. BTC prices dropped by 23% recently following the token’s surge to an all-time high close to $42,000 over the weekend. However, whale addresses have displayed accumulation behaviour, indicating large investors are buying the present dip.

Wallet addresses with more than 1,000 BTC have continued to grow despite the sudden drop in valuation, as per data presented by researcher Elias Simos. Simos concluded that whales were “gobbling” up Bitcoin during a panic sell generated by retail investors.

Market data shows a 4% increase in whale addresses since December 2, while the number of smaller addresses (less than 0.01 BTC) has fallen by more than 6%. 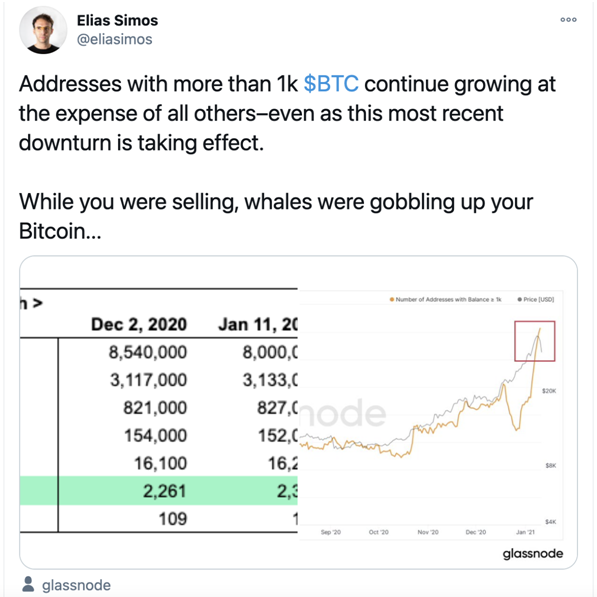 Analyst Lark Davis recently warned BTC investors that they should avoid becoming “whale food” during the dip. According to him, large investors are shaking the market while shorting it to make a profit.

Payments giant PayPal has doubled its previous cryptocurrency volume record, with $242 million worth of virtual assets changing hands on the platform recently. The payments company seems to be getting more popular among retail traders as the company’s recent volume record is taking place amid Bitcoin’s ongoing price rally.

A Twitter user Toomas Zobel speculated that the volume surge has probably resulted from retail capitulation, as per a Cointelegraph report. 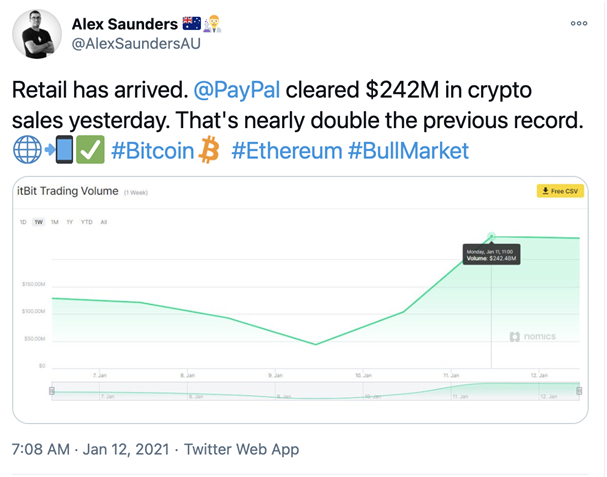 A Twitter user Toomas Zobel speculated that the surge in the volume has probably resulted from retail capitulation, as per a Cointelegraph report.

Is there a way to view whether this was buy or sell volume? In this huge dump, it may just be retail sellers capitulating rather than creating buying pressure.

Mark Cuban: Bitcoin Is "A Store of Value"

Mark Cuban, a billionaire entrepreneur, and investor, recently shared his views on the crypto market. In his opinion, a few digital assets like Bitcoin, Ethereum, and some altcoins will manage to survive the current speculative bubble just like startups such as Amazon and eBay survived the dot-com bubble while the rest failed.

Cuban noted that “crypto, much like gold, is supply and demand-driven.” When asked about Bitcoin (BTC), he said that he thinks of it as “a store of value,” adding that it has “no real utility”. 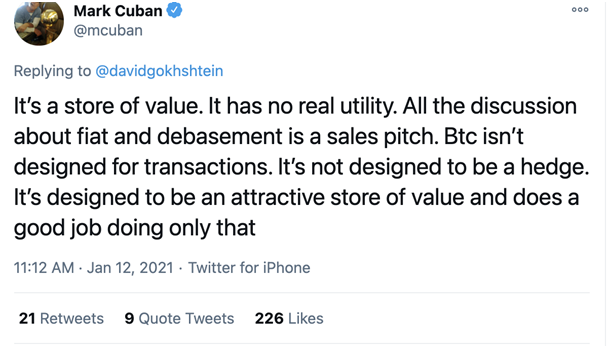 In December 2020, Cuban had taken to Twitter to announce that those using BTC to buy Dallas Mavericks merchandise would get a 25% discount. Cuban is the majority owner of the professional basketball team Dallas Mavericks.

According to a Blitz Weekly report, the Mavs have been accepting Bitcoin as a means of payment for game tickets and merchandise for the past year and a half. They use BitPay to process Bitcoin payments.

The price of bitcoin at $31,000 support barrier is absolutely crucial in the overall outlook of the price chart. If the price of Bitcoin breaks below this zone, the parabolic SAR will reverse from bullish to bearish in the 4-hour chart and prompt a break to the $29,000 level.