The Bitcoin price staged a marginal recovery over the weekend after a highly bearish week that saw BTC slip below the 20, 200, and 50-day SMAs. BTC rose up marginally on Saturday but could not go past the 50-day SMA that was acting as resistance. However, Sunday saw BTC go past both the 50-day SMA and the 200-day SMA to settle at $46,281. BTC started Monday in the red despite a positive weekend and fell back below the 200 and 50-day SMAs. After finding strong support at the $45,500 mark, BTC started the current session positively, having already pushed up by over 3%.

After an extremely bullish start to September, BTC pushed past the $50,000 level and settling at $52,046 by 5th September. The following Monday (6th) saw the price push up even further, settling at $53,156. However, the price fell drastically on Tuesday, with BTC falling by over 9% to slip below the 20-day SMA. Wednesday saw the price fall further to $46,580, where the 200-day SMA was acting as support. On Thursday, the price recovered marginally but fell back on Friday, slipping below the 200-day SMA and the 50-day SMA. 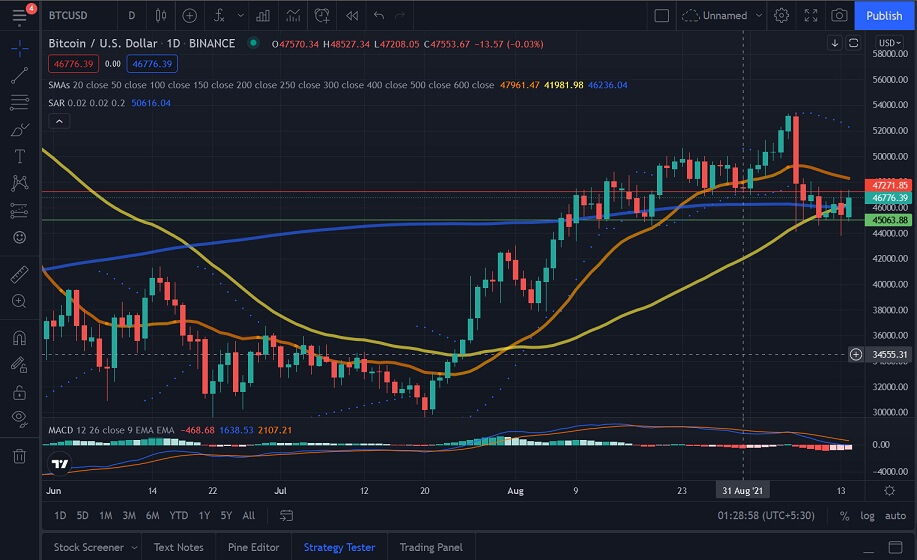 BTC recovered over the weekend, rising marginally by 0.67% on Saturday and then further by 1.60% on Sunday to push above the 50-day SMA and 200-day SMA. Monday saw BTC in the red, with the price falling by 1.77% to fall back to $45,462. The current session saw BTC start on a positive note, with buyers taking control of the session. BTC is currently up by over 3% in the current session, with the price hovering at around $46,884. While both the MACD and the Parabolic SAR are bearish, they could flip to bullish if BTC can push beyond the 20-day SMA.

Looking at the 4-hour Bitcoin price chart, we can see that after the bearish cross between the 200-bar SMA and the 20-bar SMA, the latter started acting as resistance, pushing the BTC price down. The price fell to $45.252 on the 11th but recovered and pushed back up to $45,952. However, with the 20-bar SMA acting as support, the price fell back again. BTC did push past the 20-bar SMA on the 12th but fell back almost immediately to fall to $44,965. Subsequently, the price recovered and pushed up beyond the 20-bar SMA. Currently, BTC is at $46,908 and looking to push beyond the 50-bar SMA acting as resistance. Looking at the MACD and the Parabolic SAR, we can see that they are both bullish, indicating that the price could push higher during the current session. 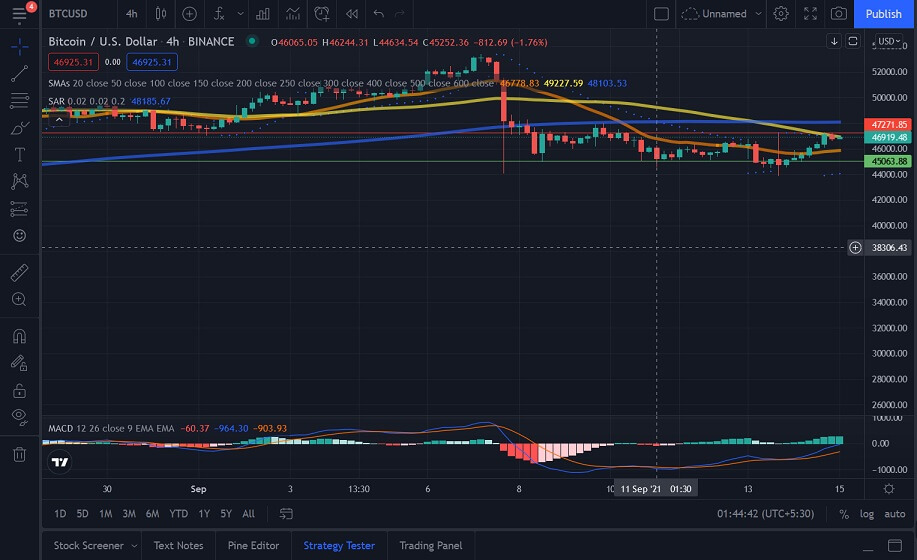 MicroStrategy Purchases $240M Worth Of Bitcoin

Business intelligence company MicroStrategy recently purchased over 5,000 Bitcoin worth around $242.9 million. The firm’s total BTC holdings have increased to over 114,042.

MicroStrategy founder and CEO Michael Saylor announced the latest Bitcoin purchase via Twitter. According to the executive, the business intelligence firm purchased 5,050 BTC at an average price of approximately $48,099 per coin.

The CEO also revealed that the Bitcoin buy cost about $242.9 million. Back in August, MicroStrategy purchased close to 4,000 bitcoin for around $177 million. The business intelligence giant also bought over 13,000 BTC in June after raising $500 million.

With this latest acquisition, the MicroStrategy CEO stated that the company now holds 114,042 BTC. As of now, this amount has a USD value of over $5 billion.

Michael Saylor has displayed his belief in the primary cryptocurrency numerous times in the past. Most recently, he noted that he or the company would not be pressured to sell any bitcoin, no matter what transpires with the price.