Bitcoin is the number one topic trending worldwide on Twitter, and for a good reason. The premier cryptocurrency breached the $20,000-mark, reached its all-time high, and has since breached the $21,000-barrier. All-in-all, it has been a pretty historic few days for Bitcoin.

Bitcoin goes up, up, and away

BTC is currently resting on top of healthy support levels, which can be visualized by IntoTheBlock’s In/Out of the Money Around Price (IOMAP).

Let’s look at a shorter time-frame via the 4-hour chart.

The shorter time-frame gives you a better idea of the high volatility that BTC is going through right now. The jaw of the Bollinger Band has widened up considerably, indicating higher volatility. The MACD also shows increasing market momentum. As such, BTC should be able to push itself above $22,000.

A recent survey conducted by the Bank of America has revealed that Bitcoin is in the rankings of “most crowded trade.” The flagship currency beat traditional investments like gold and bonds.

Bitcoin, listed third, is named as the busiest trade by 15% of survey respondents. Tech stocks (52%) and short dollar positions (18%) ranked higher than the flagship cryptocurrency. 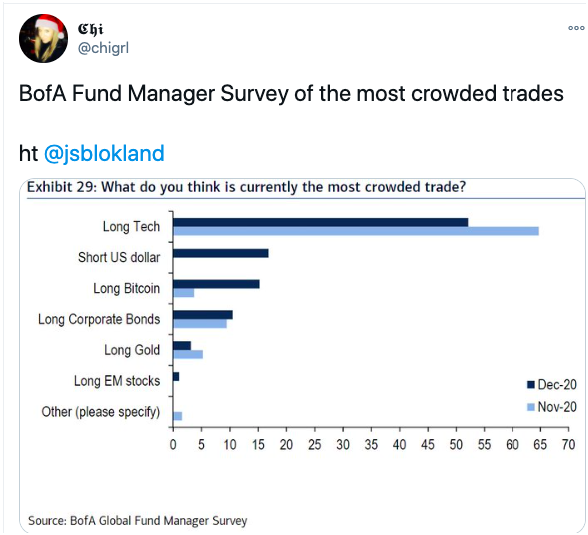 The survey was conducted between December 4 and 10 and it asked questions related to trends in investor behaviour. 217 fund managers collectively responsible for $534 billion in assets participated in the survey. When asked if they held Bitcoin long positions, 15% responded positively.

Owing to massive inflation, the trend away from cash and into uncorrelated assets like Bitcoin can be clearly seen in the survey results. Several investment managers are looking to Bitcoin purchases now after industry giants like MicroStrategy and Square acquired large amounts of Bitcoin.

The Bank of America survey also found the fund managers are underweight in cash for the first time since 2013, after buying a disproportionate amount of stocks, commodities and other assets including Bitcoin over the last few months.

Bitcoin liquidity inches closer than ever

Several major companies such as MicroStrategy and GrayScale have scaled their exposure to Bitcoin this year. Reflecting on this, CoinCorner CEO recently tweeted that a liquidity crisis for Bitcoin could be near.

According to data shared by Messari’s Ryan Watkins, MicroStrategy currently holds 40,824 Bitcoins in its storage. This amount is worth a whopping $797 million and the company has made a profit of $322 million, having put only $475 million in the leading cryptocurrency. 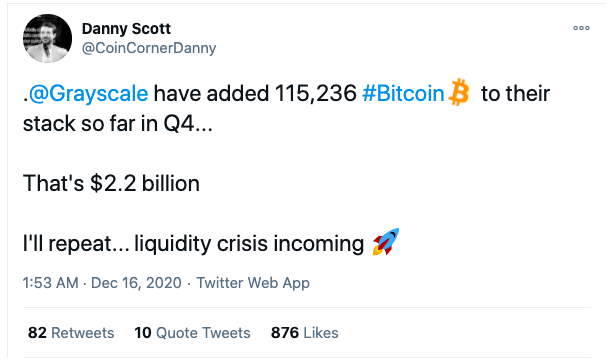 A few days ago, MicroStrategy completed raising shareholders' funds to acquire more Bitcoin. The company raised $650 million from investors. The CEO of CoinCorner, Danny Scott, believes that a Bitcoin liquidity crisis is just around the corner. He noted that GrayScale Investments has laid its hands on 115,236 BTC this year, which is equal to $2.2 billion.

He recently tweeted that $700 million worth of Bitcoin had been withdrawn from cryptocurrency exchanges as users (including financial institutions) are stacking BTC long term in cold storage vaults. 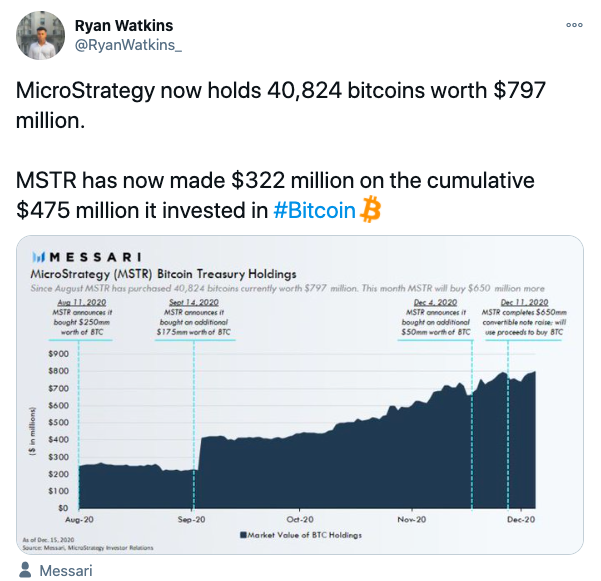 Investment strategist Raoul Pal recently said that Bitcoin is “eating the world” because of its 10-year returns of over 6,200,000% and annualized returns of roughly 200% per year. In a recent tweet, Pal expressed his views on Bitcoin as new data revealed the coin’s impressive performance.

A BTC Investment made in 2011 has delivered returns of 6,271,233%, as noted by Charlie Bilello, the CEO of Compound Capital Advisors. He added that since then, nothing has matched this performance. The next best bet, according to him, is Nasdaq, which offers a paltry 512%.

2020 has been a fruitful year for Bitcoin as it has outperformed stocks, gold and other macro bets. Against its lows of $3,600 in March, BTC/USD is up 440%. In a recent tweet, macro analyst Alex Krueger said that current price action is simply Bitcoin preparing to expand to new highs.

The more time BTC spends below 20K and the lower the funding and futures basis as price approaches 20K, the stronger the upwards break once it comes.

Robert Kiyosaki, the author of Rich Dad Poor Dad, has recently predicted that Bitcoin will hit $50,000 in 2021. Kiyosaki, who’s been bullish towards BTC in the past year, said that buying Bitcoin before it climbs above $20,000 USD is ideal before it hits his predicted value of $50,000 USD.

As institutions such as Grayscale, Square, MicroStrategy and CME are buying more and more BTC, the demand for the coin has surged. This has spiked the price and driven new investors to the market. If Kiyosaki’s predictions come true, Bitcoin’s price is headed towards a massive surge to gain over 250% within the next year.

BTC is currently in uncharted territory so it will be interesting to see how the holders are going to behave if the price reaches the $22,000 psychological level.