Bitcoin has had a tumultuous Monday wherein the premier cryptocurrency opened at $33,000 and reached a low of $27,700. Since then, the buyers have managed to make a comeback and push the price back to $32,700 levels.

Looking at the daily chart, we can see that the price has flashed the sell signal in the form of a green-nine candlestick in the TD sequential indicator. Following this, the price rose up to $34,500 and has dipped to $27,700.

The relative strength index (RSI) is still hovering in the overbought zone, which shows that the asset is still overpriced. The MACD in the 4-hour chart shows sustained bearish momentum. On the other hand, the price has found support on the middle Bollinger Band after the price bounced up from the lower Band. 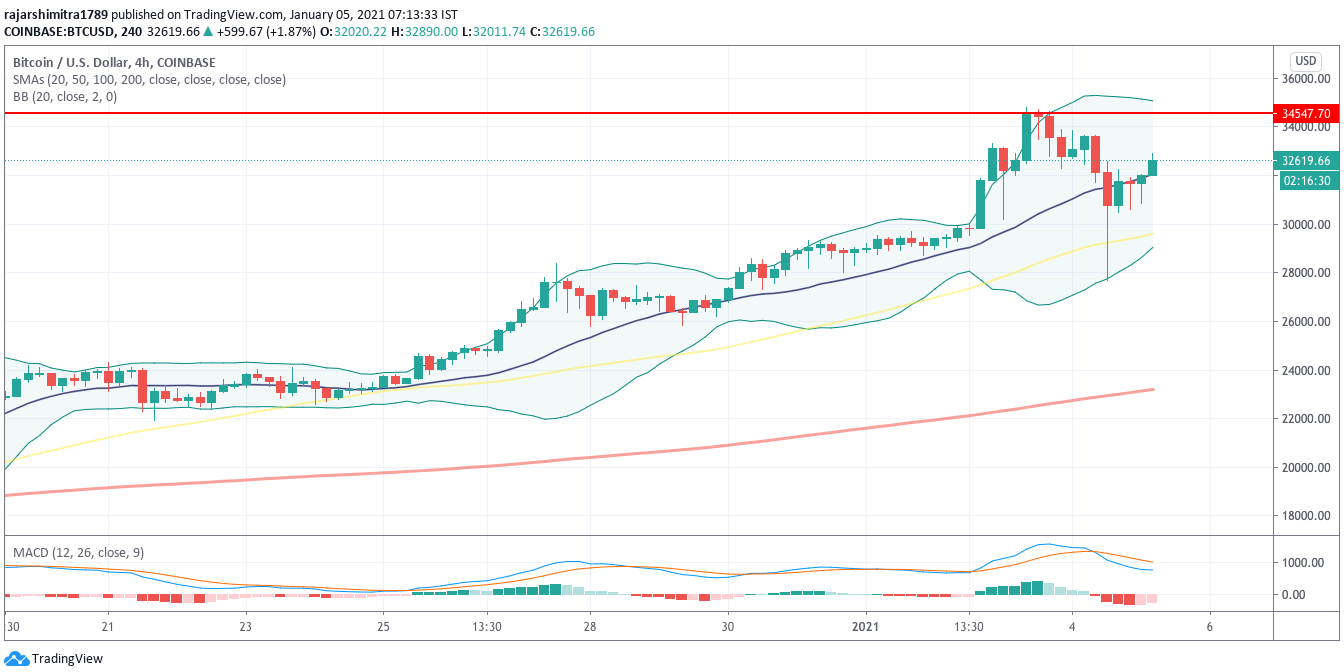 According to Santiment, an on-chain behaviour analytics platform, the number of addresses holding 10-1,000 BTC has dropped by over 1,000 this past week. However, it looks like the whales (addresses holding >1,000 BTC) have risen by at least 50. 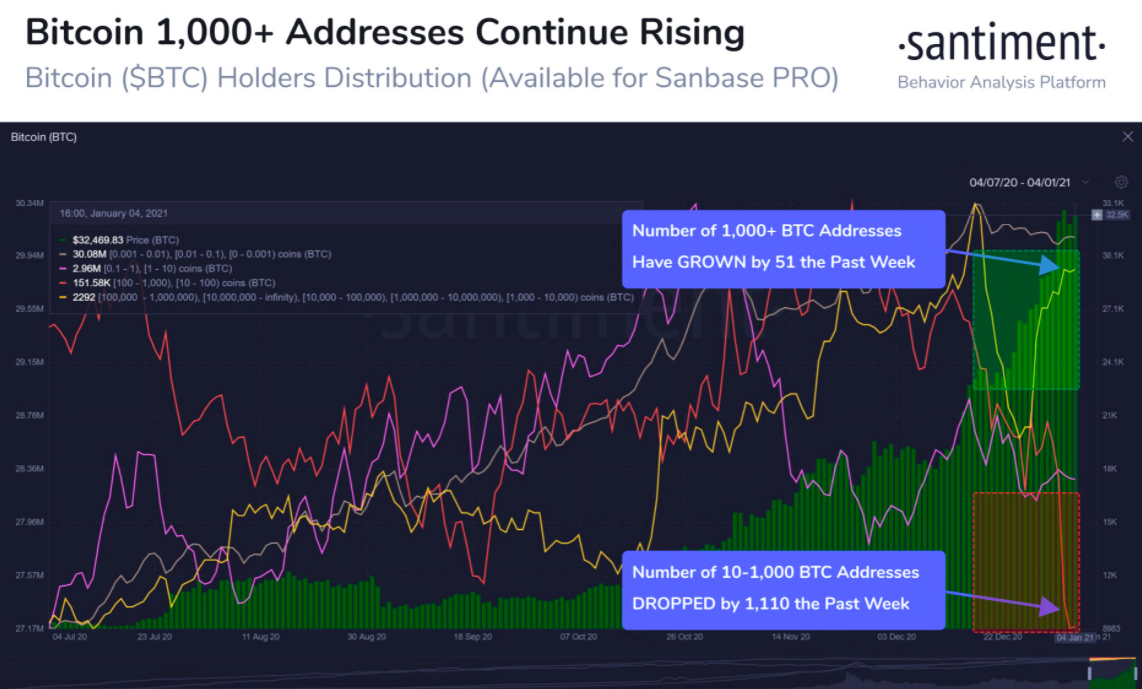 This is a positive sign as it indicates that the whales are not selling off their holdings any time soon.

Bitcoin has been breaking all its previous price records as it recently moved past the $34,500 mark. Back in 2017, BTC’s bull run was largely attributed to retail investors who were placing speculative bets on a nascent cryptocurrency market from the initial coin offering (ICO) craze.

Back then, the “average Joe” was powering BTC’s 1,300+% gain, as per a Wall Street Journal report by Chris Weston, the chief market strategist at IG Group. However, in 2020, institutional investors have been the face of the rally. These investors are mostly expected to take long-term holding positions without plans of selling anytime soon.

These institutional investors are also flocking to the Bitcoin futures markets, where open interest on the Chicago Mercantile Exchange recently surpassed $1 billion. They appear to be strengthening their balance sheets with Bitcoin rather than letting it sit in cash.  Many of the corporate giants who are supporting and investing in Bitcoin now were fiercely against the coin just a few years back.

Another main difference is that Bitcoin’s price started off in 2017 trading at about $1,000. In 2020, the coin’s price started trading at $7,200. The asset is evidently much more expensive today. Not all retail investors may realize that they don’t have to buy an entire Bitcoin to gain exposure to the asset. Unlike in 2017, East Asian investors have reportedly been unloading their Bitcoin this year at an unprecedented pace. 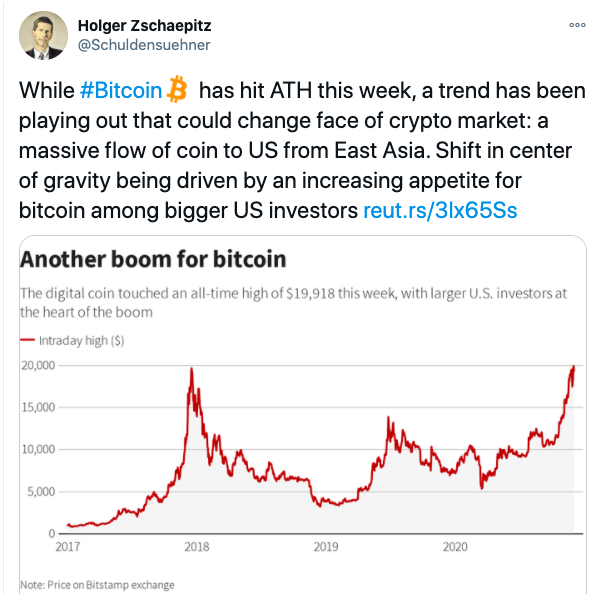 Mike Novogratz, the CEO of Galaxy Digital, has attributed Bitcoin’s ongoing price rally to institutional investors. In a recent interview with BBC World News, Novogratz said that the governments around the world printing money and “debasing fiat money” was fueling the ongoing Bitcoin (BTC) bull run. However, institutional players investing in crypto assets may be the bigger story, in his opinion.

The CEO noted that many major firms have changed their stance on cryptocurrencies in recent times, potentially impacting the supply of available coins. He said:

Now we’re seeing places like PayPal — at 340 million customers — servicing Bitcoin and selling Bitcoin [along with] big insurance companies in the United States. As the institutions move in, there just is not a lot of supply [...] There are a lot more than 21 million millionaires out there.

Echoing Novograt’s statement, investor Raoul Pal said that he believes that it’s possible for BTC to reach "between $400K and $1.2M" by the end of 2021 if trends were to continue. Pal noted that in November, 98% of his liquid net worth was invested in BTC and Ether (ETH), but added that he “still [doesn’t] own enough.”

Novogratz has also changed his opinion on what percentage investors should allocate to Bitcoin. Prior to November, he had said Bitcoiners should have invested up to 3% into BTC. However, last month, he advocated new investors to allocate 5% into BTC because “Bitcoin’s not going back to zero.”

VanEck, an investment management company, is all set to launch a Bitcoin ETF. The company recently filed for approval for the “VanEck Bitcoin Trust” with the US Securities and Exchange Commission (SEC).

Back in September 2019, VanEck had retracted its push for a Bitcoin ETF with the SEC. As proposed in its previous filing, the ETF would trade on the Cboe BZX Exchange. So far, the commission has denied all attempts to launch a BTC ETF.

However, several experts are now hopeful because of Bitcoin’s performance and adoption in 2020. The asset has caught the attention of institutional investors this year and has rallied past $34,000.

MicroStrategy CEO Michael Saylor said that the firm has plans to own $1 billion worth of Bitcoin. Meanwhile, other major enterprises such as Square and insurance behemoth MassMutual have made smaller bets on the flagship cryptocurrency.

The consequences of a Bitcoin ETF would likely be significant. Macro analyst and investor Raoul Pal says a tidal wave of institutional investors is waiting for the launch of such a trust.

On the upside, the most important level for Bitcoin remains at $34,500. The buyers need to get past this psychological level to continue their assault. The bears will have to break below the middle Bollinger Band ($32,000) to reverse this upward momentum.